Shoot the doctors? Attend every pro-life demonstration? Yell and scream “murder” whenever abortion is even alluded to? Often these are the accepted, or expected, responses to the abortion issue within the evangelical community.

Nor can we speak of abortion as some political or moral concept, removed from any personal element. If you would hesitate to call a woman a murderer to her face, consider, if you are within earshot of three women whenever you declare abortion to be murder, you are doing just that. How, then, should the church and Christians respond to this issue that affects each of our neighborhoods, each of our families, and each of our churches? The answer is to understand the nature of abortion, its impact on the mothers, and the true gospel we preach.

The Bible and Abortion

There is no eleventh commandment that clearly states, “Thou shalt not abort a baby.” However, there are plenty of passages in Scripture that are relevant to this topic.

First, the Bible is clear about the full, living, humanity of the fetus. John the Baptizer, for example, leapt in utero when his pregnant Aunt Mary came to visit. He was responding to Christ, even as a fetus. Or consider Jeremiah 1:4–5: “Now the word of the Lord came to me, saying, ‘Before I formed you in the womb I knew you, and before you were born I consecrated you; I appointed you a prophet to the nations.’” The personhood of Jeremiah far preceded his birthday. Life begins in the womb, not on the birthing table.

Second, the Bible prescribes punishment on those who cause even accidental abortions. Exodus 21:22–23 speaks of a situation where a woman is injured in a fight, leading to labor. If the child dies, the death penalty may come on the man who caused it.

Third, the biblical creation mandate is to multiply on the face of the earth. Those who intentionally seek to reduce the population through abortion are attempting to overthrow God’s command. Examples could be multiplied, but the Bible does speak to the issue. Abortion ends a human life; thus the sixth commandment does apply. It is a sin against the child and it is a sin against the divine Giver of life.

The Bible and Post-Abortion Women

Let’s stop and think about the effect an abortion has on the mother. No woman grew up dreaming of that special day when she could get an abortion. No, that’s a dreadful day, one she can’t forget. As the law of God remains impressed on the hearts of all persons, she knows the act is wrong and is filled with regret and guilt afterward (Rom. 2:14, 15). You don’t need to shout, “Murderer!” She quietly tells herself that on a regular basis. She doesn’t need a reminder of God’s law. She needs to know God’s grace!

Consider the very meaning of grace. Grace is God’s unmerited favor, His goodness toward you that you haven’t earned. God does not forgive sins on the basis of a payment plan. You can never work hard enough to pay off the debt that sin has created between us and God. Instead, grace and forgiveness are God’s free gift through the sacrifice of Jesus Christ on your behalf. Paul says in Rom 11:6, “But if it is by grace, it is no longer on the basis of works; otherwise grace would no longer be grace.” God can forgive, no matter how big the sin, because His forgiveness does not need to be earned. It is a free, gracious, gift. 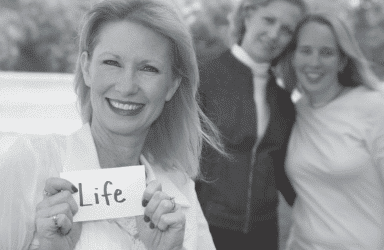 But does this apply to abortions? If you’ve had an abortion, could God possibly forgive you? Consider what the most important men in the Bible (aside from Christ) all have in common. How are Moses, David, and Paul alike? They were all murderers! Moses killed the Egyptian (Ex. 2:11–15). David murdered Uriah (2 Sam. 11:14–21). Paul persecuted and killed Christians as a habit (Acts 7:58–8:3)!

Those three had one other thing in common, too. They found grace and forgiveness from God, even for their murders. They did not—could not—earn forgiveness. But God was gracious. This is the message of the biblical gospel. God can forgive sins, even abortion, even your abortion.

The Bible, Post-Abortion Women, and Jesus

But how can the righteous Judge forgive sins? Does He simply look the other way? No. The answer is Jesus! Jesus, God Himself, became human (without ceasing to be divine), and perfectly kept God’s law. There was no sin in Him. Then He died on the cross, offering Himself as a sacrifice for the sins of others, fulfilling the purpose of the Old Testament’s sacrificial system. As the Lamb of God, He took the sins of all who will believe on Him to the cross on their behalf. He bore God’s wrath and curse for those sins. He died. But on the third day, God raised Jesus from the dead and exalted Him to His throne in heaven, thereby showing that God accepted Christ’s sacrifice for our sins. And now, those who believe in Jesus receive Christ’s righteousness, as He received our sin.

This is what Paul says in 2 Corinthians 5:21: “For our sake he made Him to be sin who knew no sin, so that in Him we might become the righteousness of God.” How would you like to trade your bank account, mortgage, and credit card debt for Bill Gates’s bank account? This is a faint reflection of what happens when you turn to Christ. He takes your sin to the cross. You get His sinlessness applied to your account. Your sin is wiped away—even the sin of abortion.

Can this be true, considering how great a sin abortion is? Listen to Paul the murderer: “Where sin increased, grace abounded all the more, so that, as sin reigned in death, grace also might reign through righteousness leading to eternal life through Jesus Christ our Lord” (Rom. 5:20–21). No sin is greater than the grace of God!

How then should we respond?

If you have had an abortion, acknowledge to God that it was a sin. But also trust in Christ for the forgiveness of all your sins as you turn to Christ and accept His sacrifice on your behalf and His lordship over your life.

For all of us, remember that the victims of abortion are all around us. There are two victims in every abortion: the baby and the mother. These women don’t need more guilt poured on them. They’ve got plenty already. What they need is the gospel of grace. They need someone to have compassion, to abandon his hypocritical self-righteousness, and tell them of the forgiveness and grace of Jesus Christ!

As an individual, family, or congregation, there are ways you can help. Skip that next rally and volunteer at your local crisis pregnancy center. These facilities exist to help pregnant women choose life and post-abortive women to find hope and forgiveness in Jesus.

There are centers in need of your help. Get involved bringing the hope of Christ to those who need it most. Seeking to save unborn lives and to change laws are worthy endeavors.

But may we never forget that the primary mission of the Church is the proclamation of the gospel of Jesus Christ—to doctors who perform abortions and even to those mothers who have had them.