Against the background of this national labor law it is interesting to consider the case of company B, a corporation engaged in building and construction in one of our midwestern cities. Here is a company whose employees were members of a Christian labor organization which was recognized by the National Labor Relations Board as a qualified bargaining agent for its members. Although this Christian labor organization was recognized by the national agencies concerned with their authorization yet it became apparent after a short time that other national labor organizations were not so tolerant. The American Federation of Labor, into whose province the building trades generally fall, began very early to exert pressure and influence on the company in question.

It must be said that at no time did the A.F.L. organizers ever directly approach the employees of the company. If they had done this they would have been in direct violation of the provisions of the Taft-Hartley law and therefore subject to court action and perhaps even prosecution. This would have been direct coercion of employees who are members of another certified labor organization.

If, however, direct coercion is prohibited the desired result can still be obtained by means of an indirect method. The effectiveness of this indirect method of coercion was clearly illustrated in the struggle of company B over against the organizing machinery of the American Federation of Labor.

Very early in the history of this particular struggle the A.F.L. placed pickets around the construction works of the company. These pickets were not placed by the men employed by the company itself for they were members of a separate Christian labor organization. Nor were the pickets placed at the insistence of A.F.L. subcontractors, for as the situation became more acute, an A.F.L. subcontractor effected the withdrawal of the pickets under the threat of obtaining a court order against them. The only conclusion that can be drawn from this fact is that these pickets were placed by the order of the central A.F.L. organizing committee which had listed the company as its next objective. 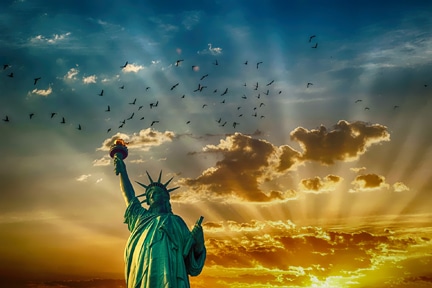 Company B also attempted to obtain a court injunction against these pickets. Their first approach was to the state courts. Here they were informed that all labor disputes were subject to the provisions of the national labor laws and, therefore, the state courts had no jurisdiction in the matter. As a consequence they went next to the federal courts but here they were informed that their dollar volume in interstate commerce was not sufficient to make them qualify for a hearing in the federal court. The consequence of all this is apparent. Here is a company which seeks the assistance of the courts of the land in the matter of a labor dispute but finds that they have no court to which they may appeal and consequently there is no law which can be applied to protect their liberties and rights.

The problem at this point in the history of this case was resolved when an A.F.L. subcontractor was successful in having the pickets removed from the construction work and the materials and goods could again be brought into the project.

The relief thus obtained was only temporary. however. Company B was successful in obtaining a substantial contract which carried a clause calling for a fine of several hundred dollars per day in the event that the construction work was not finished by a specified date. This contract stipulation gave to the A.F.L. organizers the lever which was necessary for the realization of their aim. They determined at once so to hamper the work of construction by means of their pickets that the building would never be completed by the date specified. No company can long exist if called upon to pay fines of several hundred dollars per day for uncompleted contracts.

With this lever the A.F.L. organizers once again approached the management of company B. This time it was with an ultimatum—join our organization as a company, or else.—Forcing the company to recognize the A.F.L. would automatically require all its employees to sever their relation with their present bargaining agent and join the A.F.L. The A.F.L. organizers did not approach the employees directly but it can hardly be denied that an indirect coercion was being exercised which affected the employees in a very direct way.

In the light of this ultimatum company B was forced to enter into conference with A.F.L. organizers. Here the status of their employees was of fundamental concern. The A.F.L. organizers insisted upon an A.F.L. union shop which would not allow for employees who were members of some other labor organization. It was declared without qualification that by a specified date all employees would be required to affiliate with the A.F.L. or else lose their right to work for company B.

It was pointed out to the A.F.L. organizers that less than 2% of the employees would in any way favor such affiliation and that 98% were in greater or lesser degree opposed to it. This fact was of no particular concern to the A.F.L. representatives.

As a consequence of this coercive action by the A.F.L. in relation to the company the time soon came that several hundred men lost their right of freedom of choice and against their wishes were forced to affiliate with the A.F.L. in order to keep their right to work.

This example of present A.F.L. organizing tactics raises the question whether there is still liberty and, if so, under what law?