Evangelical churches should beware of the mistakes of the mainline

The book’s title was The Power of Their Glory; its subhead described Episcopalians as “America’s ruling class.” The Episcopal church was just one of several mainline denominations that rocketed in membership, prominence and influence in the years after World War II. The horrors of war had been such a foretaste of hell that the following years saw an urgent search of security and stability. The church was there with doors open wide, and the pews were brimfull week after week.

Today these mainline churches are sometimes called “old-line” or even “sideline” churches. Massive bureaucracies totter, unsupported by empty pews; enormous conventions grind out reams of resolutions; but with the exception of the more scandalous resolutions, most are ignored. The “ruling class” Episcopal church has lost a third of its membership in the last 30 years; Mormons and Muslims each outnumber Episcopalians handily.

The ‘50s appeared to be a Golden Age for the church; how did it turn to dust so quickly? How can we avoid taking the same path?

James Hitchcock, in his essay “What Went Wrong in the Fifties,” asserts that even in the midst of the church’s popularity boom, a “spiritual dry rot” had set in. Christian belief was dissolving into a placid broth of feeling positive about others. The post-war world was wholesome and sunny; neighbors were generous and kind; there seemed nothing to repent about. Original Sin appeared to be a quaint doctrine, unnecessarily pessimistic.

The religious films of the day echoed this. Hitchcock points out that “when ‘faith’ was invoked, it almost always meant faith in humanity.” This “faith in humanity,” the optimistic expectation that people are basically good, is not a harmlessly pleasant companion philosophy to Christianity. It takes an ax to the foundation of the faith. It makes salvation unnecessary: We’re good enough, pleasant enough, kind enough without it. The tortured, bloody figure on the cross becomes just a bit of embarrassing overacting on God’s part.

If we’re good enough without needing salvation, then churches have no purpose beside civic benevolence and fellowship fun. But too many other organizations can fill these needs better than the church; so many people found more pleasurable ways to spend Sunday morning. By the late ‘60s, mainline churches were fretting about staying “relevant” and began echoing fashionably daring opinion; this tended to drive the remaining faithful scampering to the exits.

Evangelicalism has stood firm for traditional morality, so it’s not obvious how close it veers to the same precipice. But while solid doctrine is still preached, in practice some of evangelicalism is shot through with ambivalence about whether people are basically good or basically fallen. The former message definitely has greater popular appeal; when competing with a consumerist culture, we are tempted to offer consumer-tasty delights.

On Christian radio, rigorous Bible preaching alternates with feel-good messages about how much Jesus wants to comfort us. Christian counseling ministries offer to put you in touch with your inner self; they fail to grasp that real contact with your inner sell would drive you to your knees, horrified in abject repentance. Speakers simper about damaged sell-esteem, when sanctification unavoidably entails esteem of self (pride) being trampled and killed, not just damaged.

In our zeal to snare fretful, sell-centered Boomers we offer cozy, reassuring promises that “God accepts you just the way you are.” This is deceptive advertising; if you let Him in, He’ll immediately begin vigorously dismantling “just the way you are.” A particularly lame praise chorus thanks the Holy Spirit because “you let me be me.” 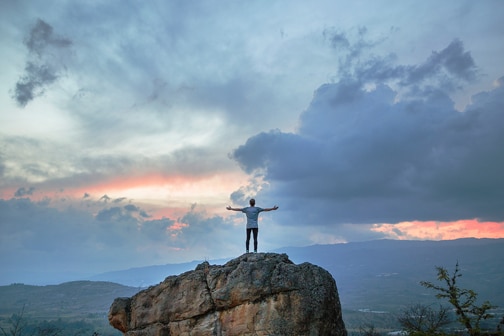 The feel-good approach is just “faith in humanity” reheated. It is a misguided attempt to reach people for Jesus by appealing to their self-centeredness and making God a servant to their egos. (“God is my shield and my butler,” says the wag.)

Not that it is an unsuccessful approach. It appeals strongly to baby-boomers still seeking a substitute for adoring parents; now Jesus and I can spend wonderful hours just thinking about little me. C.S. Lewis had it right: People don’t want a Father in heaven—they want a Grand-father in heaven who “likes to see the young people enjoying themselves.”

Christianity is not about God doting over humans. It is about humans coming to God, paying attention to God, serving Him in their lives. Worship is not about being entertained, or being healed and refreshed for the week ahead, and not even about building bonds of fellowship. Worship is about adoring one who is holy and who is a consuming fire. We lose our petty selves to Him to be reborn as servants, not our own but bought with a price.

If we forget to let God be God, if we present a watered-down, user-friendly, self-esteem-building version of Christianity, we may pack the pews. Our budgets may soar. We may have to build new gymnasiums and conference centers and increase the pastoral staff. Our churches may rise to the prominence and influence that the mainline churches had in the ‘50s.

A few decades later, we may wonder where it all went.

Reprinted from World magazine, 1/94, with permission.

trends in the church