In the introduction to his best-seller The Book of Virtue: A Treasury of Great Moral Stories William Bennett writes that “children must have at their disposal a stock of examples illustrating what we see to be right and wrong, good and bad.”1 By means of such stories, along with explicit exhortation and precept, we will form better moral character within our children. By reading through his edited collection of stories which include Aesop’s fables and medieval morality lessons, the child, according to Bennett, will learn such things as “honesty is the best policy” and “good things come to him who waits.”

For John Calvin, however, and for the biblical Christian today, Bennett’s book or other forms of “moral education” will not result in true godliness. Though civil morality and Christian godliness might appear outwardly similar, yet inwardly they are entirely different. Consider the great difference in their motives. Whereas outward morality is often motivated by altruism or by social pressures, the motive and the source for Christian pietas is Jesus Christ. 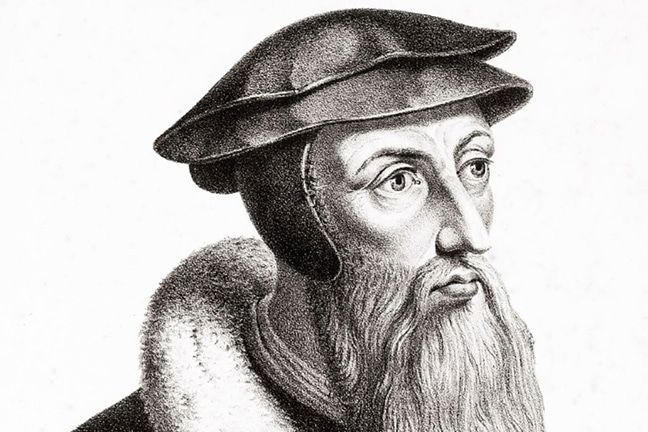 It is in the third book of the Institutes of the Christian Religion2 that Calvin specifically addresses the topic of Christian living. He begins this book with a discussion about the work of the Holy Spirit. Calvin writes that the “principle work of the Holy Spirit” is to enliven our natural, sin-deadened hearts and to produce in us saving faith in Jesus Christ (III.1.4; p. 541). Beyond this initial work of the Spirit in converting someone, the Spirit continues for the Christian as the “bond by which Christ effectually unites us to Himself” (III.1.1; p. 538). Through the Holy Spirit all of Christ and all the benefits of His finished work become ours as Christians.

One of the chief benefits obtained by Christ for us is the benefit of perfect righteousness—God’s righteousness, that is, full conformity to His law; perfect obedience unto His will; complete goodness in thought, word, and deed. This righteousness is freely credited to the believer in justification. Justification, the crediting or imputing of Christ’s perfect righteousness to the believer, is, as Calvin says, …the main hinge on whichreligion turns…. For unless you first grasp what your relationship to God is, andthe nature of his judgment concerning you, you have neither a foundation on which to establish your salvation nor one on which to build piety [pietas] toward God (III.11.1; p. 726, emphasis mine).

Unless that “main hinge” of justification is set right, the whole door will hang crooked! Without the “main hinge” of justification, we lapse into mere moralism, preoccupied with simply building better virtues in us and in others. Calvin’s teaching about Christian piety avoids this, though, we must admit, some later Calvinists did not. I have an old book on my shelf entitled Piety Versus Moralism. It is the author’s contention that the “old Calvinism” which taught total depravity, miraculous regeneration by the Spirit, and the gracious imputation of Christ’s righteousness in justification, eventually was replaced by a newer, gentler and kinder Calvinism. The newer Calvinists became, on the one hand, revivalists and Spirit-enthusiasts, and, on the other hand, became social gospel liberals, who busily proclaimed:

…the moral ideal set up by the ‘gentle Jesus;’ telling men of the dignity and the value of the human soul, its potential likeness to the perfectly good God, and its ultimate destiny in heaven. They were urging men to believe in ‘God, freedom, and immortality;’ to be good, to do good, and to live in peace with their fellowmen. They preached these things, and expected men to believe and practice them. They were great optimists.3

In order to avoid this optimistic “do goodism” when we speak about biblical piety today, we must always begin with the “main hinge” of justification, as Calvin calls it. Only in Christ, united with Him by the Holy Spirit, credited with His perfect righteousness, can we even begin walking down the pathway of increasing godliness in our Christian lives.

Calvin has much to say in Book Three of his Institutes about cultivating Christian piety. Here he devotes three chapters, nearly thirty pages, to the topic of “The Christian Life.” That is more pages than he spends on the topic of election or infant baptism! In these chapters Calvin explains and applies Christ’s words: “If anyone would come after me, he must deny himself and take up his cross and follow me” (Mt. 16:24). Calvin is not afraid (unlike some Calvinists today!), to speak repeatedly about our following Christ as our example and as our motivation for living godly Christian lives.

In this twenty-first century and among modern Christians, we especially need to hear Calvin emphasizing the place of the Church and her sacraments as “outward helps” towards Christian godliness. This is an almost forgotten teaching today. Or, if you hear it at all, it is almost a whisper. Christian pietas, godliness, is best strengthened in the life of the Christian by belonging to the visible church and there receiving the Word and the Sacrament. This is the main theme of the Institutes, Book 4:

…it is by the faith in the gospel that Christ becomes ours and we are made partakers of the salvation and eternal blessedness brought by him. Since, however, in our ignorance and sloth … we need outward helps to beget and increase faith within us, and advance it to its goal, God has also added these aids that he may provide for our weakness (IV.1.1.; p. 1011, emphasis mine).

Contrast this teaching to what you find in most Christian bookstores today.

From slogans on bumper stickers and T-shirts, to Bible verses printed on coffee mugs and key chains what an array of merchandise purporting to help Christians live more godly lives! But where in these bookstores can you find the books, or the bumper stickers for that matter, which tell people to get themselves to church on the Lord’s Day? Where will you find the bestsellers which urge weekly church attendance to receive more of God’s grace through the sermon and the Lord’s Supper? Among other things, Calvin calls the Church the “Mother of believers.” It is into her maternal bosom that God is pleased to gather His sons, not only that they may be nourished by her help and ministry as long as they are infants and children, but also that they may be guided by her motherly care until they mature and at last reach the goal of faith…. For those to whom He is Father the church may also be Mother (IV.1.4.; p. 1016, emphasis mine.)

I quoted Calvin earlier, saying that we as Christians need the Church because of our continuing “ignorance and sloth.” Do we hear these words? Even as those regenerated by the Holy Spirit and professing faith in Christ, we still lean towards spiritual laziness! We need Mother Church to grow us up that we might be more active and productive and mature. To be sure, spiritual maturity requires the knowledge of right doctrine, and Mother Church provides that. But growth in piety and Christlikeness is also an essential part of spiritual maturity.

… those who turn to the cultivation of true godliness [pietas] are said [in the Bible] to inscribe their names among the citizens of Jerusalem .… God’s fatherly favor and the especial witness of spiritual life are limited to His flock, so that it is always disastrous to leave the church (IV.1.4.; p. 1016, emphasis mine).

The cultivation of true godliness takes place in the Church. And we must be reminded that Calvin is not referring here to the mid-week Bible study, the women’s fellowship group, or the prayer meeting. The Church is the gathered and worshipping congregation under the supervision of the elders. These other activities—Bible studies, fellowship groups, prayer meetings— may contribute to the growth of godliness, but the primary means for growing in godliness are found in the assembly of God’s people gathered for worship on the Lord’s Day.

Isn’t this a needed reminder for Christians and churches today, even for us who are members of confessionally Reformed congregations? Do you want to grow in godliness? Do you want to advance in your sanctification? Don’t first go to the Christian bookstore. Don’t first go to the Christian school. Don’t first go into a personal quiet-time. Go first to the Church! Be found in worship on the Lord’s Day. Hear the Word preached and receive the Sacrament offered. This would be Calvin’s urgent counsel to us that we might grow in true godliness. “Believers have no greater help than public worship, for by it God raises his own fold upward step by step” (IV.1.5., p. 1019).

Whole books have been written about Calvin’s teaching about preaching and the sacraments.4 But consider, briefly, Calvin’s high regard for the preaching of the Word as a means for growth in holy living. Says Calvin, “By His Word, God alone sanctifies temples to himself for lawful use” (IV.1.5., p. 1019). He is saying that God makes Christians more holy and we are formed more and more as his holy temples, when we hear the Word preached. Again, “…the gospel is not preached only in order to be heard by us, but that it may radically reform our hearts” and by hearing that gospel preached we are led “to an upright and a holy life.”5

And how valuable is the Lord’s Supper for the believer’s growth in godliness and strengthening for holy living? According to Calvin, among the several benefits of taking the Sacrament is this wonderful benefit: the Lord’s Supper is “a kind of exhortation for us, which can more forcefully than any other means quicken and inspire us both to purity and holiness of life” (IV.17.38, p. 1414). More than any other external means (except for hearing the preaching of God’s Word) the Lord’s Supper enlivens and inspires us to godliness. No wonder, then, that Calvin earnestly desired each church to celebrate the Lord’s Supper on a weekly basis. We are built up by hearing the Word preached each Lord’s Day. We should also be built up by receiving the Sacrament each Lord’s Day.6

We must never forget that the goal of our faith, the purpose of our salvation, is that we might lead holy lives, to the glory of God. As the apostle Paul puts it, “For the grace of God that brings salvation has appeared to all men. It teaches us to say ‘No’ to ungodliness and worldly passions, and to live self-controlled, upright and godly lives in this present age” (Titus 2:11–12).

Or, as Calvin says so forcefully: “…the man who has godliness lacks nothing….Godliness is the beginning, middle and end of Christian living and where it is complete, there is nothing lacking….Thus the conclusion is that we should concentrate exclusively on godliness….”7

By God’s Word and Spirit, through hearing sermons and receiving sacraments, may we Calvinists today show this same dedication to growing in Christian godliness, in Biblical pietas.

2. John Calvin, Institutes of the Christian Religion, ed. John T McNeill, trans. Ford Lewis Battles, in The Library of Christian Classics, vol. 20 (Philadelphia: The Westminster Press, 1960. Hereafter, this work will be cited parenthetically with the page number from the McNeill edition also given parenthetically.

6. This is a lively debate among some in Reformed and Presbyterian churches. In the United Reformed Churches, several congregations in Classis Southwest U.S. observe the Lord’s Supper each Lord’s Day.

Rev. Randal S. Lankheet is the pastor of the Ontario United Reformed Church in Ontario, California.