Johannes Wollebius (1586–1629) was a Reformed theologian and professor of Old Testament at the University of Basel. His theological system is presented in Compendium of Christian Theology (1626), an influential book that was published in English in 1660. 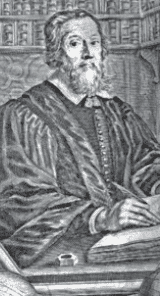 The Compendium consists of two books, the second volume containing Wollebius’s presentation on theological ethics. Chapter 10 in book 2 presents his discussion on war. He began by asserting, “War is public hostility which the magistrate exercises with armed power, for ends pleasing to God, and profitable to the state.” After defining war, he set forth eight rules with respect to war that reflect the medieval concerns of justice of war (jus ad bellum) and justice in war (jus in bello).

He embraced the three classical constituents by which to judge the justness of a war: the proper authority, a just cause, and a proper end. With respect to the first issue, he said in Rule 2, “War is to be managed by the magistrate, not by private authority.” In Rule 3, Wollebius mentioned the just cause criterion: “War must not be made, but that which is just and necessary.” In Rule 4, he included the third element, declaring that the war will be just “if it be made . . . for a good end.”

With respect to the issue of a just cause, Wollebius included the defense of the true religion in book 2, chapter 4. In proposition 9, he stated, “Religion may be defended by arms, but not propagated by arms.” In defense of his thesis, he appealed to “examples of pious kings, the Maccabees, emperors, as Constantine and Theodosius.” He had made the same point in proposition 8: “Although the church is built by the Word, not by the sword; yet being built, is justly defended by the sword against unjust violence.”

In his affirmation that arms may defend the true religion, Wollebius stood in continuity with Aquinas, who saw the just war as being a defense of the Christian community. It entails “safeguarding the common weal of the faithful” (Summa Theologica 2a2ae, q. 40, art. 4). This necessarily included the defense of the freedom to practice the Christian religion in public. John Calvin had articulated the same perspective in his sermons on 2 Samuel, asserting that a defensive war protects not only the liberty of the commonwealth but also the true religion that flourishes within it (sermon 31).

Wollebius’s position that the sword may defend the church had particular relevance in his lifetime when Protestantism was under attack at multiple points. In the Augsburg Interim (1548) Charles V attempted to suppress Lutheranism within the German Empire. Nicholas von Amsdorf and other Lutheran pastors in the city of Magdeburg defied imperial law and produced the Magdeburg Confession (1550), which stated, “If the high authority does not desist from eradicating true doctrine and true worship of God, then the lower magistracy is required by God’s divine command to attempt, together with their subjects, to stand up to such superiors as far as possible” (Preamble).

Suppression of the Reformation gospel occurred elsewhere. The Reformed community, as well as the Lutherans, found themselves on the defensive. The Dutch revolt that began in 1566 was a defensive war fought for the sake of the Reformed religion that was being repressed by Philip II, the king of Spain. Similar developments were happening in France at the same time. On August 24, 1572, Charles IX, the king of France, began to slaughter Huguenots in Paris and throughout France. The Calvinists, like the Lutherans at Magdeburg, appealed to the lesser magistrates to resist such tyrannical encroachments with the sword. Theodore Beza produced a biblical case for such resistance. Amandus Polanus à Polansdorf, the professor with whom Wollebius studied at Basel, likewise asserted that Scripture allows war to be waged by inferior magistrates.

Although Wollebius emphasized the justice of war category, he nevertheless referred to the issue of justice in war. In book 2, chapter 10, he stated in Rule 7: “Policy joined with lying and breaking of covenants, is not to be allowed; but it may be approved with dissimulation.” The difference between illegitimate lying and legitimate dissimulation was a standard theological distinction. Aquinas had argued that “the plan of campaign” (which may include the tactic of an ambush) “ought” to be “hidden from the enemy.” Conversely, “the breaking of a promise” is “always unlawful.” Aquinas emphatically declared, “No one ought to deceive the enemy in this way, for there are certain rights of war and covenants, which ought to be observed even among enemies” (Summa Theologica 2a2ae, q. 40, art. 3).

A Digest of Classical Doctrine

Wollebius presented a succinct abridgment of classic medieval and Reformed teaching on a central concern of moral theology, the doctrine of a just war. He paved the way for later Reformed theologians of the seventeenth century such Johannes Hoornbeeck, who also taught that the true religion may not be propagated by force, but it is to be defended by arms when it is attacked by others.

1. All quotations from this volume are taken from Johannes Wollebius, The Abridgment of Christian Divinity (London: T. Mabb, 1660).

Dr. Mark J. Larson is a teacher and pastor on the campus of Cono Christian School in Walker, IA.