Johannes Piscator is not a household name familiar to 21st century Reformed Christians. Yet four hundred years ago, his name was renowned in both Lutheran and Reformed circles. That renown was due to his formulation of the doctrine of justification. This doctrine, precious to every Protestant believer, was the heart of the Reformation and one of the two essential differences between evangelicals and Roman Catholics. Piscator was an articulator and defender of the Protestant doctrine, yet with a singular twist—a twist which brought down upon him the condemnation of several Reformed synods, especially those held in the early 17th century by the Reformed Church of France. 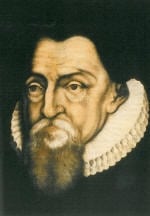 Piscator’s story begins with his birth in Strasburg (Germany) in 1546. He studied under Jerome Zanchius at his hometown university, then journeyed for further study to Tubingen. In 1571, he became Professor of Theology at the University of Strasburg where he promoted the modification of Aristotle’s curriculum (grammar, rhetoric, dialectic, physics, and metaphysics) popularized by Peter Ramus. It was this modified curriculum which became widely accepted in the Reformed academies of Europe in the late 16th century. In 1574, he was installed Professor of Philosophy at Heidelberg University; his colleagues on the faculty were Johann Tremellius, Francis Junius, Kaspar Olevianus, and Zacharias Ursinus (the latter two instrumental in writing the Heidelberg Catechism).

Lutheran pressures at Heidelberg forced him to move, first to Siegen (1577), then Neustadt (1578) and Moers (1582). In 1584, he rejoined his old colleague, Kaspar Olevianus, as corector of the academy in Herborn (Germany). Here his career blossomed and his prodigious literary output began to appear in print. Piscator translated the entire Bible from Hebrew and Greek into German (1602); wrote commentaries on every book of the Old and New Testament; and contributed numerous theological works on predestination, justification and the sacraments. His “explanation” of the Heidelberg Catechism appeared in 1614.

The most popular of his works was Aphorisms of the Christian Religion which was a (aphoristic) summary of John Calvin’s Institutes. But prior to his death in Herborn in 1625, Piscator had also advanced and defended his distinctive doctrine of justification by the passive obedience of Christ.

While there appear to be anticipations of Piscator’s views in some Lutheran theologians of the time, his opposition to the imputation of the active obedience of Christ became notorious in Reformed circles. In 1603,the National Synod of the Reformed Church of France (Gap) directed a letter to Piscator urging him “not to trouble the churches with his new fangled opinions.” Piscator’s response to the Synod’s letter was summarized at the 1607 (Rochelle) sitting of the National Synod. On that occasion, his views negating the active obedience of Christ in the work of justification were deemed defective.

With Piscator in mind (though not named), the French National Synod of 1612 (Privas) required that all its ministers affirm “that our Justification consists not only in the forgiveness of sins, but also in the imputation of [Christ’s] active righteousness.”

And finally, at the Synod of Tonneins (1614), the Reformed Church of France adopted the following explanation of Article 18 ( of The Confession of the Reformed Church of France [1559]) on justification: “Jesus Christ our Savior . . . [by] His ignominious death upon the cross, having most perfectly both in His life and death, fulfilled the whole law, and that particular commandment imposed on Him by His Father of suffering and giving His soul a ransom for many, by which His most perfect obedience we are justified because it is counted ours by the grace of God and apprehended by that faith which He gives unto us.”

What was the fuss all about? Piscator had drafted “Thirteen Theses on Man’s Justification” (in Latin) in which he set forth his views. But his book written against the great Counter-Reformation Jesuit apologist, Robert Bellarmine, in 1594 provides even more insight into his explanation of justification by faith. The book is entitled A Learned and Profitable Treatise of Man’s Justification; it was translated into English and released in 1599. Piscator focused on the usual Protestant argument against the Roman Catholic doctrine of justification; the latter confuse sanctification with justification.

Bellarmine stood in the tradition of the Catholic Counter-Reformation Council of Trent (1545-1563) when he taught that the justification of a sinner before God must make him righteous (Latin: justus facere=justificare=“to make just” or “to make righteous“) by infusing (or putting into the sinner) the righteousness of Christ.

Protestants from Luther and Calvin on had argued that justification occurs by the imputation (the crediting, charging or reckoning) of righteousness to the sinner. Piscator agreed that justification is by imputation, but stated it this way: “imputation of justice” (or righteousness) “and not imputing of sins” are “one and the same thing.” In other words, Piscator believed in the imputation of the work of Christ to the sinner (not infusion; hence he opposed the Catholic doctrine), but imputation equals the satisfaction of Christ’s death on the cross (His so-called “passive obedience”) and no more. “Justification is no other thing than forgiveness of sins” through Christ’s death on the cross. In this little book, Piscator avoided joining imputation with the righteous life of Christ (His so-called “active obedience”) and, as we have seen from the 17th century actions of the Synods of the Reformed Church of France, even repudiates the imputation of the righteous or obedient life of Christ to the sinner. That is to say, for Piscator, justification flows from the work of Christ, imputed to the believer and that work consists solely in the forgiveness of sins at the cross.

Now every Reformed and evangelical believer rejoices in the cross of Christ as a constituent element in removal of the guilt of sin. Concomitantly, remission of sin cancels the penalty which bars us from the holy courts of our righteous God. So we praise God for the forgiveness of sins as a constituent element of our justification (Acts 13:38-39). But every Reformed and evangelical believer is aware that removal of guilt and punishment is insufficient for acquittal in God’s sight. Our consciences, as it were, though forgiven, are sensitive that we must possess a positive righteousness before God in order to cancel our positive unrighteousness. (Kind of like being back inside the Garden of Eden—because our sin penalty through which we have been evicted has been removed— but conscious that all is not yet just right, i.e., we are still not righteous in God’s sight.)

Yes, Lord Jesus, remove the penalty for our unrighteousness; but dear Lord Jesus give us the righteousness which will constitute us acceptable in God’s sight. And Jesus says, “Take my righteousness! Take my righteous life—all 33 years of it! Take it—I give it to you freely so that with me you may stand righteous in God’s sight. I will impute to you not only the benefit of my death on the cross (forgiveness of sins), but I will also—grace upon grace—impute to you the benefit of my life on the earth (righteousness). And in my resurrection from the dead, all of this will be confirmed to you, dear believer!!”

Piscator’s refusal to affirm the benefit to sinners of the imputation of the righteous life of Christ was a truncation of the Reformed and biblical doctrine of justification. In his exposition of righteousness issuing from the declaration of the sinner’s justification, Piscator focuses exclusively on the death of Christ. For Piscator, righteousness unto justification is found only in the single event of Christ’s death on the cross. While this is good news indeed, it is only half (or one third) of the “old, old story of Jesus and His love.”

It is also possible that Piscator could not escape the limitations of the human forensic declaration of justification. By this I mean, a human judge may declare a penalty satisfied and thus a (penal) debt removed (forgiven). But the human judge cannot bestow the righteousness of which the criminal is deficient. No debt payment will fill up the unrighteousness of a crime to the level of perfect righteousness. Thus “just” in the human forum is payment of penalty only. When the penalty is paid, the judge may declare “Not Guilty!” But the Lord God, the Righteous Judge of all the earth, is greater than any human judge. He is both able and willing to remit the penalty and constitute the sinner righteous in His sight on the basis of a righteousness which perfectly fills up the deficit measure of unrighteousness which the sinner has incurred. At the divine bar of justice, a superabundance of grace is revealed: forgiven and counted righteous.

Some have suggested that Calvin agreed with Piscator. Piscator even cited Calvin in support of his own position in his 1594 book against Bellarmine: “we perceive that Calvin makes the formal cause of justification to be imputation of justice which otherwhere [elsewhere] he calls forgiveness of sins.” And in his Aphorisms, Piscator provides the following summary of Calvin’s doctrine of justification in the Institutes: “so whom the Lord shall receive to grace, them He is said to justify, that is, of sinners to make them righteous, and this He doth by pardoning and discharging them from their sins.” With Piscator therefore, some have argued that Calvin expresses justification solely in terms of forgiveness of sins.

It is true that Calvin does connect justification with forgiveness (as all Protestant and Reformed theologians do). But in his sermon on Deuteronomy 21:22, 23, Calvin declares, “Paul . . . says that because we cannot attain to righteousness, but by fulfilling the law in all points, and by being discharged by God, it behooved our Lord Jesus Christ to be subject to the law to the intent that His obedience might now be imputed unto us, and God accept thereof as though we brought the like obedience of our own . . . And so by that means we are taken for righteous in Jesus Christ. Why so? because He was obedient.”

And again Calvin says, “Our Lord Jesus Christ hath fulfilled the law and not failed in any one point or iota thereof: now we be clothed again with his righteousness, and the same is allowed unto us as our own” (Sermon on Deuteronomy 27:4–6).

And finally, Calvin’s sermon on Galatians 2:16: “Thus, since the righteousness of the law is unattainable, and is something from which we are utterly barred, we need to find another righteousness. Put another way, we need God to accept us through His free grace. Instead of God receiving anything from us, we need the obedience of the Lord Jesus Christ to be imputed to us, though we do not deserve it.”

It would seem that any plain reading of the whole Calvin and the historic Reformed position on justification (as reflected in her Confessions and theological compendia) would conclude with the French Reformed Confession of 1559: “We believe that all our justification rests upon the remission of our sins, in which also is our only blessedness, as saith the Psalmist (Psalm 32:2). We therefore reject all other means of justification before God, and without claiming any virtue or merit, we rest simply in the obedience of Jesus Christ, which is imputed to us as much to blot out all our sins as to make us find grace and favor in the sight of God” (Article 18; note the explanation of this Article cited earlier in this essay under the heading “French Reformed Synods”).

The Belgic Confession of 1561 contains the following chapter heading for Article XXIII: “Our Justification Consists in the Forgiveness of Sin and the Imputation of Christ’s Righteousness” (Schaff, The Creeds of Christendom, 3:409; cf. Cochrane, Reformed Confessions of the 16th Century, 204).

Nearly a century later, the Westminster Shorter Catechism reechoes this teaching: “Justification is an act of God’s free grace, wherein he pardoneth all our sins, and accepteth us as righteous in his sight, only for the righteousness of Christ imputed to us, and received by faith alone“ (Question 33).