Last month we saw that Jesus was truly human and truly righteous. If Jesus was only a man, then you could safely forget about Him. However, if He is also God, as Christians confess Him to be, then you should give careful thought to Him.

In his gospel, John reveals Jesus as the eternal pre-existing Son of God who became Man in order to restore us to the Father through His own death and resurrection. John writes, “Jesus did many other miraculous signs in the presence of His disciples which are not recorded in this book. But these are written that you may believe that Jesus is the Christ, the Son of God, and that by believing you may have life in His Name” (John 20:30,31). Throughout his gospel, John reveals Jesus as the Lord of Glory, the Son of the Almighty God. He is very God of very God. 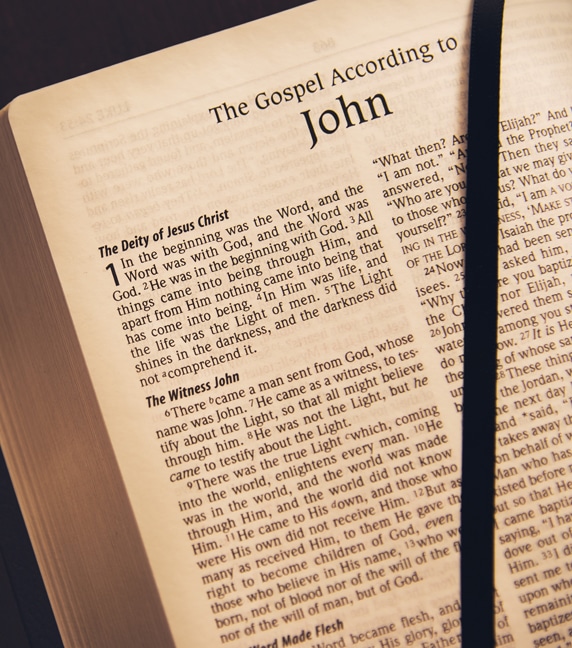 How does John set forth his proofs that Jesus is God? The first thing John writes in his account of the life of Christ is that He was pre-existing. The “in the beginning” of John is before the “in the beginning” of Genesis. John tells us as much when he reports that “all things came into being by Him, and apart from Him nothing came into being that has come into being” (John 1:3). John is telling us that when we begin to talk about Jesus Christ, we can only do so correctly by going beyond the beginning of creation all the way into eternity past.

John is not the only one to emphasize the deity of the Christ. The Prophet Micah informs us that the one born in Bethlehem would be “from the days of eternity” (Micah 5:2). The author of Hebrews also reminds us of Christ’s presence at creation in Hebrews 1:1, 2. And, in the Book of Revelation, Jesus claims to be the Alpha and the Omega, the Beginning and the End, the First and the Last. Through these passages and more, we can be assured that Christ was there before all things.

The Personhood of Christ

However, the very next thing that John writes is that Jesus was not just standing there along side of the Father as the Father created. John affirms the separate personhood of Christ within the Godhead by writing “and the Word was God”. Apart from their separate tasks, everything you can say about the Father, you can say about the Son. They are equal in wisdom, power, holiness, justice, goodness, and truth.

One may well ask why it is so important to believe that Jesus is very God of very God. Understand that there are some very practical applications to this.

The Power of Christ

Another important aspect of Jesus Christ being God comes at Calvary. Because Jesus is God, His death on the cross becomes very important to us.

If you were to make the statement that you would like to die for the sins of another person it would not do any good. You are a sinner. The only sin that you can die for is your own. Even then your death would not be enough to satisfy the justice of God. You would be utterly destroyed. Human flesh is finite. Dust we are and to dust we will return. The wrath of God against our sin, on the other hand, is infinite. No human being, no matter how strong or powerful, could ever withstand the almighty wrath of God to the finish. Because of this, God will measure out His wrath in small doses, a little bit at a time. That being the case, we would be forever burning in hell carrying the weight of God’s wrath for all eternity.

How necessary for us to find a Savior who is able to withstand God’s wrath; One who can endure the punishment completely. How necessary for that Savior to be as powerful as God Himself! Only an infinitely powerful Being, very God of very God, can withstand the infinite wrath of God. That, dear readers, is what sets Jesus of Nazareth apart from all others who claim to be saviors. Jesus Christ, who is God as John points out in his gospel, can endure the wrath of God.

The Propitiation of Christ

In addition, the catechism teaches us that our Savior must be truly God in order to earn for us righteousness and life. In order for us to be right with God, we must be righteous before God. But we are not. We are sinful.

We could sacrifice animals like they did in the Old Testament, but animals are only finite creatures who cannot atone for the sins of man. Instead, there must be a perfect, holy sacrifice made for us by one who is sinless and obedient to the will of God from the very beginning. Such a sacrifice would have infinite value. It would exonerate us if we would place our hope and trust in such a sacrifice.

Such a sacrifice was found in Jesus Christ. Paul writes “He who had no sin, was made to be sin for us, so that we might be the righteousness of God” (II Corinthians 5:21). Jesus had no sin. That made His death on the cross a sacrifice for sin. Not His sin, because He had no sin, but our sin when we acknowledge Him as our Savior.

It takes an omnipotent power to restore us into God’s favor. We need a Mediator! We need a Savior! Jesus must actually give us His righteousness. He must give us life. Out of His infinite love and power Jesus is able to give to us eternal life.