Have you ever had an “Aha! Moment”? I do not mean one of those times where something you had been struggling to understand suddenly became clear. That is sometimes what we mean when we say “Aha! Moment.” No, I mean when you thought you knew something quite well, but all of a sudden it takes on a new and unique significance because you have gained an uncanny appreciation and insight far beyond anything you had had before. Before it seemed so clear and understandable—and it probably was—but now, because of some new piece of knowledge, that same concept has taken on a brand-new meaning it never has had for you before.

I had this sort of thing happen not too long ago. The Lord has blessed me with a beautiful and thoughtful wife and I often tell her that I love her and appreciate how wonderful a wife she has been. Yet, there was a moment not too long ago, while she was still pregnant with our first child that, out of nowhere and without asking her at all, she brought me a glass of iced tea. I do not know why, but this gesture of her love and care struck me; I thought to myself,

This is the most wonderful, caring, loving wife a man could have — and she’s carrying my child!

It was like a wave of warmth rushed over me. All I could do is just praise the Lord in my heart and thank Him for His wonderful gift. It was not as though I did not love my wife before, nor was it as though I had an ungrateful heart toward our heavenly Father, who had given such a prized gem. However, with that one very small but tangible gesture of care and love, I was brought to new heights of awe and appreciation for who God is and what He has done for me by giving me such a loving wife. Something so small and mundane as giving me a glass of tea nearly brought me to tears as my heart was moved with an exuberance of love and affection for my dear bride and thankfulness to my heavenly Father.

Many times as Christians we can have a true appreciation for what God has done for us in a particular area, but, as happens in marriage, there is a certain familiarity that goes along with that intimate knowledge. It is not that we take these precious truths and spiritual realities for granted; it is just that we think we understand so much about them that we become familiar. Pastors and church leaders can get caught up into this way of thinking, because we, of all people, have a great knowledge of the things of God and what He has done. 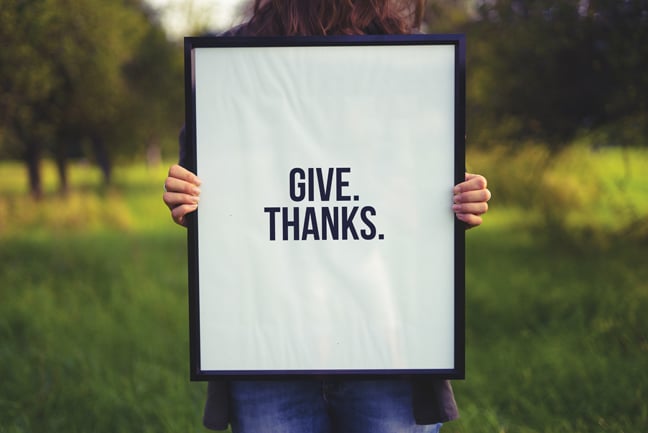 Our hearts have a tendency to be occupied by many other things. Giving due consideration to God’s goodness by properly praising Him and giving Him thanks for all that He has done many times gets pushed to the side in all our cares. However, the tendency is there for all Reformed Christians (who have some amount of theological grasp on who God is, how He works, and especially on what Christ has accomplished for His people) to become calloused to these truths and fail to appreciate them fully.

The Lord’s Supper was meant to remedy such familiarity by giving us a small, tangible expression of who God is in Christ Jesus and what our Savior and Lord has done in redeeming us. Through this sacrament, the Lord presses into our minds and hearts the benefits He has given to us in His great love by pressing into our hands the elements that speak to the greatest of all His love-gifts: the life we have through our Savior’s death. It is meant to move us to greater thankfulness and worship of our Sovereign Lord.

For centuries, the Christian Church has called the celebration of this sacrament “The Eucharist.” In some highly liturgical traditions, the expression has been retained. Still, it is a word rarely heard in Reformed circles. Many people, when they hear the term “Eucharist,” automatically react in their minds— if not out loud—“Popery!” After all, the Roman Church calls their “Mass” by the name “Eucharist.”

There is a very good reason that the true, biblical Sacrament of Holy Communion should be called “Eucharist.” In Greek, eucharisteo literally means, “I give thanks.” When our Lord Jesus Christ instituted the Supper on the night before His death, He did something very significant. Before the distribution of both the bread and the wine, He gave thanks (Matthew 26:26-27). There was a certain sense in which He was consecrating the common elements of bread and wine for their sacred use. To be sure, the Christian practice of giving thanks before all meals probably owes much to Christ’s own example at the final Seder. However, what Christ was doing was joining together the thankfulness that we have toward our God, who redeemed us by the death of his Son, and the celebration of the sacrament He instituted for the very purpose of causing us to remember such a great gift (I Corinthians 11:24-25).

Calvin expresses this very idea in the Institutes (IV.17.37): “We previously discussed how the Sacrament of the Sacred Supper serves our faith before God. But, the Lord here not only recalls to our memory, as we have already explained, the abundance of his bounty, but so to speak, gives it into our hand and arouses us to recognize it” (emphasis added). He gives it into our hand, as Calvin says, not just for any reason, but to move us to thanksgiving and praise. In this sacrament, we are induced to give thanks to God our Savior and are given tangible symbols of His grace and mercy toward us undeserving sinners.

The elements certainly are not very complicated; just everyday bread (the staple of life for most people in the world) and a cup of wine (the drink of celebration for most people in the world). One could easily come to the Table with that note of familiarity, eat and drink, and having worshiped, go home. But we must allow the meal to have its proper place in our hearts and heads in reminding us to give thanks in a special way when we eat and drink, spiritually and by faith, of Christ’s body and blood.

In Christian worship, one of the most ancient liturgical elements is called the Sursum Corda. It is a responsive call to the people to lift their hearts up to the Lord and to give thanks to Him. Our earliest knowledge of the Sursum Corda comes from one of the Greek Fathers, Hippolytus, in his work Apostolic Traditions, from around 215 AD. Other early Church Fathers mention it as well, men such as Origen, Cyprian, Cyril of Jerusalem, and others. It is one of the most universal and most permanent fixtures in Christian liturgy, even being used in many Reformed and Presbyterian Churches from the time of the Reformation on through today. It goes something like this:

Leader: The Lord be with you. People: And with your spirit. Leader: Lift up your hearts! People: We lift them up to the Lord! Leader: Let us give thanks to the Lord our God. People: It is right to give him thanks and praise. Since the time of the Greek and Latin Fathers who recount its use, the Sursum Corda (literally, “lift up hearts”) has been used as the people prepare to receive the sacrament of Holy Communion. It truly is fitting that such an element be used in Christian worship at the time the Supper is celebrated (and Calvin thought so, as he retained its use in Geneva). What the Sursum Corda calls us as Christians to do as we approach the table is no less what Scripture calls us to do and what the Supper accomplishes by faith: to lift up our hearts to heaven; to feed upon Christ crucified, risen, and glorified; and to evoke in us a special thankfulness to our precious Savior who died to make us free from sin.

As Thanksgiving approaches, we are especially reminded of God’s kindness and beneficence toward us through grand meals and fellowship with our families and friends. However, when we approach the Table of the Lord, we should be all the more reminded of His goodness toward us, His Covenant people. We approach His awesome throne to eat of the grandest meal ever known to man, and we do so with full assurance that we are His people, forgiven, cleansed, and made new by the power of the Holy Spirit.

In this simple but awesomely powerful act, we do not enter a Thanksgiving feast that celebrates the success of those who first colonized the land in which we live, but rather we enter into—in part and before-hand—the great Feast of the Lamb, the celebration of the success of our Lord Christ in defeating sin, death, and hell for us. As we sit at table with all our Christian family, let us look forward to that day when all of the Church, of all ages, nations, and peoples, will sit together to be served by our loving Spouse and Head, our beloved Jesus, who gave Himself for His Bride to cleanse us Himself for His Bride to cleanse us and make us new. More than the greatest act of human kindness and love, this should make our hearts soar with thankfulness and love, and give us a newer and greater appreciation for what we already have by faith in the Son of God.