And the sin that was wrought through the tree was undone by the obedience of the tree. (Proof of the Apostolic Preaching. 4)

The city of Lyons, France contains the remains of a Roman amphitheater which was the site of the death of more than forty Christians in the year 177 A.D. The female servant, Blandina, was the most famous martyr tortured on that occasion. Notably absent from this bloodbath approved by the Emperor Marcus Aurelius (161–180 A.D.) was the presbyter Irenaeus. The soon-to-be bishop of Lyons was instead at Rome on an embassy of peace, “showing himself worthy of his name” (i.e., “irenic”). Sovereignly exempted from the martyr’s arena, Irenaeus lived to become the dominant theologian of the second century. The first heresiologist (i.e., cataloguer and opposer of heresies) whose work is extant, Irenaeus provides a window on biblical theology in the century after the apostles. 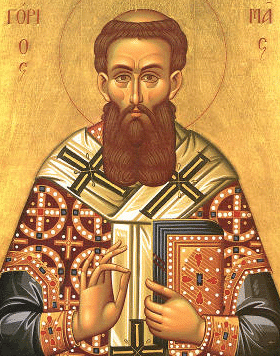 In his battle with the Gnostics, Irenaeus left five books against these heretics. These chapters are remarkable for recounting Gnostic emanations. They display a trenchant opposition to the “knowledge falsely so-called” Gnosticism and its aberrant Christology which left Christianity with only an apparent Savior.

The Gnostics believed that the Son of God only appeared or “seemed” to take human flesh. They were therefore often referred to as Docetists and their Christology, Docetic. The radical Gnostic antithesis between the world of the flesh (visible, material arena) and the world of the spirit (invisible, immaterial arena) made it unthinkable for the Son of God to become incarnate. Hence, the humanity of Jesus of Nazareth was one of appearances for Gnosticism; reality was a distinctly separate spiritual world having no concrete relationship with human nature. The incarnation was a chimera, a will-of-the-wisp, a phantasm, an illusion.

Irenaeus responded with a vigorous defense of the salvation of man body and soul by the “man from heaven” who truly united human nature to his divine nature in order to redeem it. Countered Irenaeus, the Son of God did not “seem” to become flesh (John 1:14) He did not merely “appear” to become man; the Son of God assumed real human nature in the womb of the virgin Mary. And he did this for our salvation. Christology and soteriology are incarnational for Irenaeus.

Gnosticism’s anti-incarnational theology was not the only threat to the church in Irenaeus’s day. Marcion (fl. 140–150 AD) and his followers were also troubling the visible kingdom of God. Marcion believed that he was directed by God to re-edit the Bible in a fashion more palatable to those developing (“growing”) both beyond Judaism as well as apostolic Christianity. Active in Rome about 145 A.D., Marcion eliminated the Old Testament from inspired Scripture (its “Jewish” God was cruel and vicious) and restricted his Canon to the New Testament writings. Yet even the twenty-seven books of the New Testament were not sufficiently MC (“Marcionite Correct”). So Marcion removed the portions which he judged offensive: all the gospels save Luke were dismissed as “Judaistic frauds” (he even abridged the third gospel); the Pastoral epistles were rejected; and he edited/abridged the remainder of Paul’s letters. Marcion’s “canon within a canon” presupposed his own subjective criteria for what constituted the Word of God.

Irenaeus came to the defense of the Biblical Canon, asserting the continuity between the God of the Old Testament and the God and Father of our Lord Jesus Christ. The integrity of the Word written was as crucial to Irenaeus as the integrity of the Word incarnate. (Irenaeus promised a full-length treatment of Marcion’s errors, but this work, if actually completed, is not extant.)

Irenaeus was born in Asia Minor (possibly Smyrna), sojourned for a time in Rome (possibly as a pupil of Justin Martyr), but spent his mature years in Gaul (modern France), where he most likely died. Scholars do not know the precise year of his birth (he left few autobiographical clues in his writings), but Irenaeus does mention the famous Christian martyr Polycarp as a person whom he had seen and heard preach in his youth. Since most scholars believe Polycarp was burned at the stake in Smyrna about 155/56 A.D., Irenaeus must have been born some time before mid-century (?ca. 130–140 A.D.). How he came to settle in the western portion of the Roman empire is unknown; his books, written in the Latin-speaking West, were penned in his native tongue— Greek. When the Lyons martyrs were executed (177 A.D.), bishop Potbinus was included in the pogrom. Upon his return from Rome, Irenaeus was chosen as his successor. Here he labored until his death (ca. 200 A.D.). There is a later tradition that he too was martyred but this cannot be substantiated.

Irenaeus is known to us chiefly from his two surviving works (the second, though known from antiquity by name, was first discovered in a complete Armenian edition in 1904): Examination and Refutation of Falsely Named ‘Knowledge’ ; and Proof (or Demonstration) of the Apostolic Preaching.

The first, and the most famous, is a detailed exposition of Gnosticism with an equally detailed defense of the incarnation of the Son of God. The second work is a brief, almost catechetical, outline of the gospel summarizing the history of redemption from Adam to Christ. Central to both works is Irenaeus’s concept of recapitulation.

Recapitulation or “summing up” is Irenaeus’s redemptive-historical approach to the organic unfolding of God’s revelation. All of history indeed, all of mankind is summed up (“recapitulated”) in two Adams: Adam, the first (Gen. 2–3) and Adam, the last (1 Cor. 15:45; Cf. Rom. 5:12–21). “[Christ] has therefore in his work of recapitulation, summed up all things, both waging war against our enemy, and crushing him who had at the beginning led us captives in Adam, and trampled upon his head” (Against Heresies=A.H., 5.21.1). Irenaeus explains salvation as the recovery (in the last/eschatological Adam) of what was lost (in the first/protological Adam).

“In the times of the end, the Word of the Father and the Spirit of God, having become united with the ancient substance of Adam’s formation, rendered man living and perfect, receptive of the perfect Father, in order that as in the natural Adam we all were dead, so in the spiritual Adam we may all be made alive. And for this reason in the last times, not by the will of the flesh, nor by the will of man, but by the good pleasure of the Father, his hands formed a living man, in order that Adam might be created again after the image and likeness of God” (AH., 5.1.3).

This biblical-theological (indeed Pauline) approach to the progress of revelation is eminently covenantal. Irenaeus sees two heads, two covenant fathers, two races summed up (recapitulated) in the two Adams. All in the protological (first) Adam are lost through the Fall; all in the eschatological (last) Adam are saved through the incarnation, death and resurrection of the Son of God. “Remission of sins follows upon the Lord’s advent, by which ‘He has destroyed the handwriting’ of our debt, and ‘fastened it to the cross’ (Col. 2:14) so that as by means of a tree we were made debtors to God, so also by means of a tree we may obtain remission of our debt” (A.H, 5.17.2).

Against the heretics of his era who repudiated the history of redemption, the reality of the incarnation of God the Son, and the unity of the Bible, Irenaeus resolutely and brilliantly defended the orthodox teaching of Salvation in the second Adam—One who was truly man—so that the souls and bodies of men could be united to God forever in heaven. “Jesus Christ our Lord, the Son of the Most High God [was] promised by the law and the prophets that he would make his salvation visible to all flesh; so that he would become the Son of man for this purpose, that man also might become the son of God” (A.H.,3.10.2).