In the last issue we began discussing the Secondary Dominant Domains™ of IRBC’s philosophical model of counseling. The Secondary Dominant Domains™ consist of the Environmental Domain™ and the Productive Domain™. Within the Environmental Domain™ are three different realms: The Spiritual, Social, and Physical. Last time we looked at the Spiritual Realm. In this article we will concentrate on the Social and Physical Realms.

The Social Realm™ within the Environmental Domain™ primarily represents God’s superintendence over the three basic institutions he ordained for establishing and maintaining order in human affairs. The basic institutions are the family, church, and government. When these institutions are neglected or corrupted, problems arise in people’s lives. Several terms have been attached to these three institutions to make them more descriptive in connection with their importance and role within IRBC’s training model. Let’s take a moment to familiarize ourselves with them: The Primary Social Institution™, the Basal Social Institution™, and the Foundational Social Building Block™.

The Primary Social Institution™ is the visible church. God has designed this institution to be his primary instrument in bringing about the salvation, edification, and sanctification of the elect in order that they might fulfill the ultimate purpose for which mankind was created: the glorification and enjoyment of God. The Bible and members of the invisible church are the means by which the Holy Spirit accomplishes this divine objective. The head of the church is Jesus Christ, her Savior and Lord. The Basal Social Institution™ is government. God uses this institution in a general way to establish and maintain order in the family, church, and society at large (state). God brings this gift of order to human beings in a general way through the realm of (mediate) general revelation via the human conscience. The conscience is an inward “regulator of law and order” built into the fabric of the spirits of the finite creatures who were created in the image of an infinite, eternal, moral, and orderly being: God (imago Dei).

This “regulator” functions in connection with God’s timeless moral law (i.e., the Ten Commandments) and the order and operations1 of the members of the Trinity in connection with the covenant of redemption (pactum salutis). God uses the unseared conscience working in connection with the capacities of reason and memory to establish law and order among human beings, as well as enable them to fulfil their role in exercising dominion over his creation.

The Foundational Social Building Block™ of the Primary Social Institution™ (church) and the Basal Social Institution™ (government/state) is the family. It is the institution from which the other two are built. There is no institution that God has established among men that can surpass the family’s influence and related success in evangelism, discipleship, education, or industry. For this reason Christians must stand united and defend the biblical definition of the family, especially in light of the 2015 United States Supreme Court decision to redefine marriage. Of course, we must also seek to be used of the Lord to defend and restore the other two institutions as well. One of the practical ways this is done at the grassroots level is by shining forth associated truth via the ministry of biblical counseling.

Looking for origins of counseling-related issues arising in the Social Realm™ within the Environmental Domain™ also involves looking beyond the three basic institutions and taking into account the collective actions of persons functioning (legally or illegally) to promote agendas and philosophies which run contrary to God’s truth. The collective actions of people bent against truth often appear in the landscape of our lives today via radical organizations with outspoken activists or by strategically orchestrated rallies and protests. Because the blatantly negative activities and messages arising from these entities pose a threat to the security of morally sensitive and orderly beings, they need to be considered. The bad fruit which proceeds from these entities oftentimes causes a great deal of unrest and fear in the lives of, especially, the elderly—inner tension that often sets their hearts searching for peace and safety. Both can be found in the bosom of the Wonderful Counselor who brings forth this glorious fruit through pulpit ministries and the ministry of biblical counseling.

The Physical Realm™ represents the fixed physical structures in the various geographical landscapes across the face of the earth, the prevailing climate or weather patterns in various regions of the world, and devastating events (natural disasters) which occur through the forces of nature (e.g., tornados, earthquakes, tsunamis). The seasons are also considered within this realm because they, along with the things just mentioned, can also be contributing variables to counseling-related problems in the lives of God’s people (e.g., Seasonal Affective Disorders).

Along with his using the truth of Scripture to minister to counselee’s problems arising in this realm, the Holy Spirit, via the instrumentation of a biblical counselor, can also effectively bring associated truth from the realm of general revelation to bear in their lives. For example, it has been determined (by true science) that some people living in regions where sunlight is limited suffer from depression resulting from a deficiency of Vitamin D in the body. The prescription in such a case would not be to repent of sin but to supplement one’s diet with vitamin D3 or the utilization of a safe lamp that enables the body to produce this vitamin in which it is deficient.

The prefix macro- represents a thing, condition, or an event which is large or exceptionally prominent in scope, while micro- is indicative of something small. Meso- is the intermediate designation signifying something in the middle or between macro and micro. 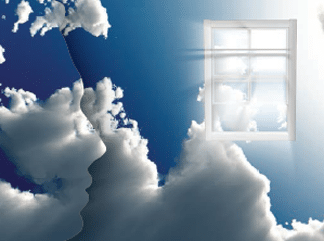 An example of a familiar macro-environment event occurring within the Physical Realm™ with which we can all relate is the worldwide flood recorded in the seventh and eighth chapters of Genesis. This event radically altered the physical contour of the earth as well as the life of the creatures which dwelt upon it. Second Peter 3:6 says, “The world that then was, being overflowed with water, perished.” The various geographical and atmospheric alterations that occurred as a result of the Noahic cataclysm have and continue to affect all of earth’s inhabitants. The negative effects on the earth’s physical environment caused by the Fall and the flood certainly account for some of the extreme prevailing climactic conditions in certain regions, as well as some of the severe weather we encounter today. Such weather-related variables can have direct counseling-related implications that should be explored by counselors, especially in cases of depression.

An example of a meso-environmental problem with variables rooted in the Spiritual Realm™ would be a Christian working in a factory with co-workers who are predominately pagan. Such an environment can be the source of many problems in a counselee’s life.

A micro-environmental problem which is social in nature (Social Domain™) might involve a Christian teenager who is a social butterfly living with Christian parents who are very quiet and subdued. Such a disparity can lead to frustrations and misunderstandings in the lives of those involved. Neither the parents nor the child are necessarily sinning by expressing themselves in association with their varying personalities. The counselees in such a case might benefit more from a session wherein a comprehensive discussion ensues about the different personalities represented in the family and the best way to relate to them, rather than one wherein the counselor spends the majority of his time delivering admonitions encompassing biblical principles of humility and/or communication.

It is my hope that as you have interacted with some relatively deep and complex truths and concepts (in an accelerated fashion) via this article, you have gained a deeper appreciation for the depth of God’s wisdom in creating for his children a multidimensional environment in which they can live in fellowship with him and each other. Although sin has radically altered the three realms God created to encompass and give expression to environment, there is still hope for restoration.

Every time a sinner is saved and faithfully taught and trained in the light of the full counsel of God’s Word, he or she becomes an instrument in the hand of God for the restoration of the institutions that structure environment (i.e., family, church, government) and the realms which encompass and give expression to it (i.e., spiritual, social, physical). May God be pleased to restore within his church around the world a burning conviction to obey the Great Commission given by our chief commanding officer, Jesus Christ. And may it be that this conviction be expressed, in part, through the ministry of Reformed biblical counseling solely for his honor and glory: Sola Deo Gloria!

1. Zacharias Ursinus, in his analysis of the Trinity in his Commentary on the Heidelberg Catechism (1591), expressed two ways that the three persons of the Godhead are distinguished from each other: 1) by their works (ad intra) and 2) by their mode of operating (ad extra). Wilhelmus à Brakel, in The Christian’s Reasonable Service (1700), listed five ways in which they are different: (1) in personal properties, (2) in names, (3) in order, (4) in the manner of existence, and (5) in the manner of operation. Finally, Louis Berkhof, in his Systematic Theology (1938), affirmed the points made earlier by Ursinus about ad intra (i.e., unbegottenness, generation, and spirationall matters connected to manner of existence, divine order, and manner of operation as it pertains to the covenant of redemption) and ad extra (the unified yet ordered works of creation and redemption).