Outlook readers probably all sensed God’s hand at work in 1989 when the Communist governments of Eastern Europe began to collapse. One after the other they toppled like dominoes in a row . It seemed to me that God was both judging the system of communism and offering the people who had lived in darkness a new opportunity to repent and believe in Christ. And the Church responded by beginning to send missionaries. 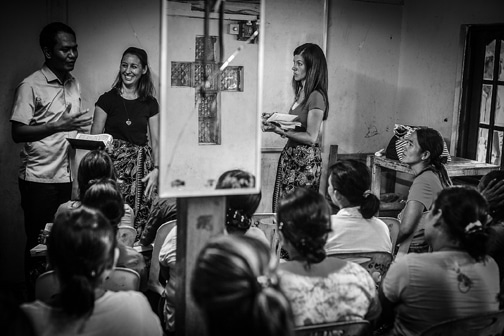 The International Institute for Christian Studies [IIICS] had begun its work a few years before communism fell. Since 1986 we had been at work placing Christian worldview scholars in secular universities in Africa. And with the opening of the Iron Curtain there came a flood of invitations from across the former communist block. Just about everywhere there seemed to be a demand for English speaking Christian scholars to offer an alternative to the Marxist worldview that had failed. And much of this demand for Christian scholars came to the doorstep of IICS because, as far as we know, we are the only Christian agency devoted exclusively to placing highly trained Christian professors in secular colleges and universities. For several years the demand for our Professors has been many times greater than our ability to recruit qualified professors and arrange funding for them.

IICS sent our family to Minsk, Belarus (former USSR) where I spent 21 years teaching in a new university started by a group of anti-communist dissident scholars. During that time I taught numerous classes and also presented Christian perspective papers at academic conferences, arranged the translation of a couple Christian academic books into Russian, and we held a home Bible Study. It was an intense, exciting time.

After completing our term in Minsk, lICS reassigned us to Prague, Czech Republic (former Czechoslovakia) where there is a good school for our children. (The lack of a school for our kids was a major problem in Belarus.) In September. 1996 I began teach ing at Anglo-American College IMCI in Prague. This college was started about 5 years ago by some American and British businesspeople. It is growing very rapidly (about 400 students right now) because so many students want an English language college education. My colleague, Dr. Richard Smith, and I have been able to teach a variety of Bible and Christian worldview classes. This fall I am scheduled to teach “Business Ethics” and “Philosophy of Religion.”

We have had very interesting responses from our students. One wrote, “I found out that I have always understood religion in a far too narrow sense and that this has probably closed my eyes to religion. Religion, with all of its connections to worldview and meaning of life, seems to be so important and fruitful that I wonder how I could have neglected it so far.” A number of my students have written, “Even though I am an atheist. I enjoyed reading the Bible because…” and then different reasons followed.

Though we are discovering a few Christians in our classes, our experience largely follows the national statistics, that 80% of Czechs call themselves atheist or agnostic. But their atheism or agnosticism is often not a firm, committed atheism or agnosticism. Many seem eager to at least learn about Christianity. Our experience in the college classroom again seems to be parallel to the polls of Czech parents that say that 88% want their children to know about the faith of the Church, 62% want their children to know the Bible, 48% want their children tohold Christian moral principles, 22% want their children to believe in God, 14% to go to church, and 9 % to pray at home. I think it is worth our time, effort and money to fulfill those wants in the college classroom. And while we present information about the Christian faith in a winsome manner, we trust that God will be calling people to salvation. Because of the open door God has provided, we are forming a plan to start an entire “Department of Christian Studies and Social Ethics” at MC in Prague. With four or five professors we want to offer a wide variety of classes that will provide information about the Bible and the Christian faith, teach Christian ethics, help those who are becoming Christians, give extra teaching for Christians, and even give basic training for students preparing for leadership in the new churches. This is a big project that will take a lot of time and work, but it really looks worthwhile.

What we need from our fellow Christians is, first, prayer. John Calvin taught us that prayer is the way of appropriating God’s blessing. Without prayer we just spin our wheels, but when God’s people pray, great things can happen. We alsoneed encouragement; sometimes we get tired and discouraged. And as I mentioned, two of our greatest obstacles are sending qualified professors who can go, and arranging sufficient funding. I think Outlook readers can help here.

This past year has been filled with surprise and crises for us. The othertwo families we expected to workwith us both had to return to the States because of cancer. But these crises may have helped our longrange planning. And I think we are positioned for significant work in the coming years.

Paul observed (Rom. 10:14): “How can they hear without someone to preach to them? How can they preach unless they are sent?” To which we might add, “Who will do the sending if not you?”

Dr. Thomas K. Johnson is a graduate of Covenant Theological Seminary and is an ordained minister in the PCA. Dr. Johnson can be contacted at the IICS Prague Project, P.O. Box 12147. Overland Park, KS 66282-2147.