Our January issue called attention to two articles in Stromata, the organ of the students at Calvin Seminary, in which the infallibility of Scripture was questioned while its divine inspiration was maintained.

There is an essential difference between inspiration in a general sense, as for example, of poets, painters, architects,—or of the fruits of their creative and elevating genius—and that special inspiration which marked the writers of Holy Scripture and the books which they wrote. The difference is not only one of content but also of degree. Only the books of the Bible are inspired in the sense that they are infallible, without error, having been written under the special guidance of the Holy Spirit.

It can not be emphasized too strongly that consistency will compel us to relinquish the doctrine of the plenary (full) inspiration of the Bible if we surrender the truth of its infallibility.

Let us also remember that no doctrine is more basic than that of the full and verbal inspiration and infallibility of Scripture. All other Christian teachings are derived from Scripture. All revealed truths stand or fall with that doctrine. The very foundations of the Christian faith, including all it contains, crumble if its source, the Scripture, is found to be unreliable in any of its parts. The primary Author of Scripture is God the Holy Spirit. If we cannot put implicit trust in all that he says we cannot have full confidence in any of his utterances.

If the Holy Spirit was not able to purge the minds of the secondary authors of whatever wrong ideas or information they may have had on earthly matters, what assurance have we that they were kept from error in their declarations concerning those great mysteries of the faith which human reason could never divine! Our Lord told his disciples that when the Holy Spirit would come he would lead them into all the truth. The word “all” is comprehensive; it leaves no room for exceptions.

Reservations regarding the infallibility of the Bible mean a questioning of the Reformed doctrine of verbal inspiration—which means that the very words of Scripture, not less than its thoughts, are God-breathed. In more than one Bible passage the thought is stressed that a certain word or words were divinely chosen (examples: Matthew 5:18; John 10:34, 35; Galatians 3:16). Thought inspiration implies word inspiration. As Professor John Murray puts it in that wonderful first chapter of the book “The Infallible Word” (a symposium on the doctrine of the Bible, by members of the faculty of Westminster Seminary): “It is difficult to understand why those who assent to inspiration should stumble at verbal inspiration. For words are the media of thought and, so far as Scripture is concerned, the written words are the only media of communication. If the thoughts are inspired, the words must be also.” 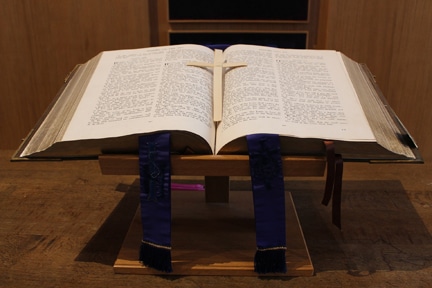 MORE FROM MURRAY’S CHAPTER ON “THE ATTESTATION OF SCRIPTURE”

We wish all our readers could study the aforementioned chapter by Professor Murray in “The Infallible Word.” We regard it as an unanswerable argument for Biblical infallibility. In this chapter the writer discusses the assertion, made also in the Stromata articles, that we can maintain the inspiration of the Bible even though we question its infallibility. We take the liberty to quote Murray at some length:

“The fact of human authorship does indeed seem to provide a very easy argument for the errancy and fallibility of Scripture. Or, to state the matter less invidiously, human authorship seems to provide a very easy and necessary explanation of what are alleged to be the facts of errancy and fallibility. We must accept the facts, it is said, rather than hide behind the theory of inerrancy.

“Those who thus contend should, however, be aware of the implications of their position. If human infallibility precIudes an infallible Scripture, then by resistless logic it must be maintained that we cannot have any Scripture that is infallible and inerrant. All of Scripture comes to us through human instrumentality. If such instrumentality involves fallibility, then such fallibility must attach to the whole of Scripture. For by what warrant can an immunity from error be maintained in the matter of ‘spiritual content’ and not in the matter of historical or scientific fact (italics mine-K)? Is human fallibility suspended when ‘spiritual truth’ is asserted but not suspended in other less important matters?

“Furthermore, if infallibility can attach to the ‘spiritual’ truth enunciated by the Biblical writers, then it is obvious that some extraordinary divine influence must have intervened and become operative so as to prevent human fallibility from leaving its mark upon the truth expressed. If divine influence could thus intrude itself at certain points, why should. not this same preserving power exercise itself at every point in the writing of Scripture? Again, surely human fallibility is just as liable to be at work in connection with the enunciation of transcendent truths as it is when it deals with the details of historical occurrence.”

Not less important than the argument quoted above are the proofs which Murray offers that the Scriptures themselves claim inerrancy. However, before offering those proofs, the writer explains what is the proper attitude toward the apparent (not real) contradictions in the Bible which s 0 m e mistakenly regard as proofs for the fallibility of Scripture. We quote again:

“It must be freely admitted that there are difficulties connected with the doctrine of Biblical infallibility. There appear to be discrepancies and contradictions in the Bible. Naturally, we cannot be expected to believe what we perceive to involve a contradiction. Furthermore, disingenuous and artificial attempts at harmony are to be avoided, for they do not advance the cause of truth and of faith. The conscientious student has, therefore, great difficulty sometimes in resolving problems raised by apparent contradictions. It is true that many such resolve themselves when careful study is applied to them, and oftentimes the resolution of the difficulty in the light of the various factors involved becomes the occasion for the discovery of a harmony and a fulness of meaning that otherwise would not have been recognized by us. But some difficulties, perhaps many, remain unsolved. The earnest student has no answer and he may frankly confess that he is not able to explain an apparent discrepancy in the teaching of Scripture.

“It might seem that this confession of his own inability to resolve seeming discrepancy is not compatible with faith in Scripture as infallible. This is, however, at the best very superficial judgment. There is not a doctrine of our Christian faith that does not confront us with unresolved difficulties here in this world, and the difficulties become all the greater just as we get nearer to the center. It is in connection with the most transcendent mysteries of our faith that the difficulties multiply. The person who thinks he has resolved all the difficulties surrounding our established faith in the Trinity has probably no true faith in the Triune God. The person who encounters no unresolved mystery in the incarnation of the Son of God and in his death on Calvary’s tree has not yet learned the meaning of I Timothy 5:16. Yet these unanswered questions are not incompatible with unshaken faith in the Triune God and in Jesus Christ the incarnate Son. The questions are often perplexing. But they are more often the questions of adOl’ing wonder rather than the questions of painful perplexity.

“So there should be no surprise if faith in God’s inerrant Word should be quite consonant with unresolved questions and difficulties.

“The defense of the foregoing position that faith is not inconsistent with unresolved questions is far more crucial in this debate than might at first sight appear. It lies very Close to the vital question of what is the proper ground of faith in the Bible as the Word of God. The ground of faith emphatically is not our ability to demonstrate all the teaching of the Bible to be self-consistent and true. (Italics mine-K). This is just saying that rational demonstration is not the ground of faith. The demand that apparent contradictions in the Bible should have to be removed before we accord it our credit as God’s infallible Word rests, therefore, upon a wholly mistaken notion of the only proper ground of faith in the Bible.…The nature of faith is acceptance on the basis of testimony, and the ground of faith is therefore testimony or evidence. In this matter it is the evidence that God has provided, and God provides the evidence in his Word, the Bible. This means simply that the basis of faith in the Bible is the witness the Bible itself bears to the fact that it is God’s Word, and our faith that it is infallible must rest upon no other basis than the witness the Bible bears to that fact.”

Anyone of our readers who wants to know how convincing that witness of the Bible to its own infallibility is can do no better than to purchase a copy of the book from which we have just quoted. The title is : “The Infallible Word.” The price is only $3.00. The publisher is the Wm. B. Eerdmans Publishing Company, 255 Jefferson Avenue, S. E., Grand Rapids, Michigan. Anyone of our publishers or book dealers can provide you with a copy.