In 1551—four hundred fifty years ago—a dramatic confrontation occurred in Geneva between John Calvin and Jerome Bolsec over the doctrine of predestination. Today that controversy is largely forgotten, but it was a significant episode that provides a remarkable window on the character and meaning of the Reformation.

The facts of the controversy are rather simple. Jerome Bolsec who was a Carmelite monk and doctor of theology in Paris, was drawn to the Reformation and so forced to leave France. By early 1551 he had settled in the canton of Geneva working as a physician. From early on he became a critic of Calvin’s doctrine of predestination in a variety of ways and settings. The confrontation reached a new height, however, on October 16, 1551. One of the Genevan ministers at a regular Friday gathering for a sermon and discussion, preached on predestination. Bolsec seems to have believed that Calvin was out of town, but Calvin had returned early and had entered the meeting late, sitting in the back. In the discussion Bolsec rose to criticize Calvin and his doctrine of predestination very sharply. In answer to Bolsec, Calvin rose and gave a detailed, and according to his supporters, brilliant defense of predestination. The city magistrates arrested Bolsec and he was placed on trial by the city. To demonstrate the correctness of the Genevan doctrine and the unity of Swiss Protestants, the magistrates in Geneva sent a letter to get advice from Basel, Zurich and Bern. The responses were extremely disappointing to Calvin: the support of the doctrine of predestination was tepid at best and the counsel of the cities was to be lenient with Bolsec. The trial of Bolsec proceeded despite such advice, especially charging him with attacking the religious establishment of Geneva and bringing scurrilous charges against its doctrine. On December 23, 1551 he was banished permanently from Geneva. He eventually returned to the Roman Church and in 1577 wrote a vicious biography of Calvin which propagated many false stories about Calvin. Bolsec died in 1584. The letter of the city of Geneva seeking advice from other ministers of Switzerland provides a clear summary of the way the Calvinists in Geneva understood Bolsec’s position: “That worthless wretch rose up, and affirmed that the false and impious opinion, that the will of God is the cause of all things, took its rise during the present century from Laurentius Valla; but that in this he acted wrongly, for he charged God with the blame of all evils, and falsely imputed to him a tyrannical caprice, such as the ancient poets fancifully ascribed to their Jove. He then took up the second head, and affirmed that men are not saved because they have been elected, but that they are elected because they believe; that no one is condemned at the mere pleasure of God; that those only are condemned who deprive themselves of the election common to all. In dealing with this question, he inveighed against us with a great deal of violent abuse.” The Genevan ministers saw Bolsec as charging them with introducing theological novelties and with making God a tyrant and the author of sin. They also saw him as teaching that predestination was grounded in the actions of men rather than in the will of God. 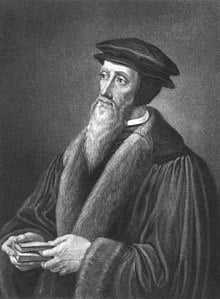 The position of Calvin and the Genevan church on predestination was clear and well-known. Calvin had indeed written much that showed the biblical foundations as well as the importance of this doctrine for the church. When Calvin revised his Institutes in 1559, he alluded to this incident (as well as others) when he wrote in his first chapter on predestination: “A baffling question this seems to many. For they think nothing more inconsistent than that out of the common multitude of men some should be predestined to salvation, others to destruction” (I, 21, 1). He wrote even more strongly in the next chapter: “Some object that God would be contrary to himself if he should universally invite all men to him but admit only a few as elect. Thus, in their view, the universality of the promises removes the distinction of special grace; and some moderate men speak thus, not so much to stifle the truth as to bar thorny questions, and to bridle the curiosity of man. A laudable intention, this, but the design is not to be approved, for evasion is never excusable. But those who insolently revile election offer a quibble too disgusting, or an error too shameful” (I, 22, 10).

Calvin certainly recognized the difficulty of the doctrine for many: “Human curiosity renders the discussion of predestination, already somewhat difficult of itself, very confusing and even dangerous” (I, 21, 1). Yet he saw its importance for God’s glory, for our humility and for our understanding of the character of God’s grace. He wrote, “We shall never be clearly persuaded, as we ought to be, that our salvation flows from the wellspring of God’s free mercy until we come to know his eternal election, which illumines God’s grace by this contrast: that he does not indiscriminately adopt all into the hope of salvation but gives to some what he denies to others” (I, 21, 1).

Although Calvin recognized the difficulty for many of the doctrine of predestination, that recognition did not make him more tolerant or patient of Bolsec. Bolsec was apparently not a particularly acute theologian.

T.H.L. Parker commented on Bolsec that he was “a poor theologian technically.” Calvin’s impatience with Bolsec is clear in a letter that he wrote to Heinrich Bullinger, the leading minister of Zurich, on October 15, 1551 apparently just the day before his public confrontation with Bolsec. In this letter Calvin did not refer to Bolsec by name, but used him as an illustration of the kinds of problems that he faced in Geneva. With considerable agitation Calvin wrote: “A certain Dominican, a minister of the word in a neighboring village, has emerged from the mud under evil auspices. He bawled out openly in the assembly that he had a dispute with me and the Church of Geneva; and this without the least provocation. Not content with that, he brought forward a paper filled with foul accusations, in which I was bitterly reviled for more than twenty times. On the matter being known, he was sent home. Emboldened by impunity, any satellite of the Council of Trent insults me now with equal ferocity. This is the communion of the Church which we daily profess. I omit other matters equally dishonorable, which I endure, not without sadness; although I am not so much moved on my own account, as on that of the public; for I see clearly that such a breaking up of alI orderly discipline, so foreign to Christianity, cannot stand for any length of time.” This controversy is certainly primarily theological and focused on a doctrine very important to Calvin’s understanding of Christian truth and life. Calvin is insistent that his God, the God of the Bible, is just and holy in all His doing, not some arbitrary Jupiter. He is also passionate about the need for sinners in humility to recognize that their salvation comes from God alone, planned from eternity and applied sovereignly to them. The theological issue is not the only matter that this confrontation illumines however. In the next issue of The Outlook we will consider some of the other issues illumined by the Bolsec affair of ISS1.

Dr. W. Robert Godfrey, professor of Church History, is also president of Westminster Theological Seminary in Escondido, CA. He is a contributing editor of The Outlook magazine.