But Christ has indeed been raised from the dead, the firstfruits of those who have fallen asleep. (1 Cor. 15:20)

Do not take the fact of the resurrection for granted. It is not just an ordinary event that happened some time many, many years ago. An ordinary event would be the sun rising in the morning and setting at dusk. However beautiful it may be, however many poets may write about it or artists paint it, the rising and setting of the sun are ordinary events. God has been ever faithful to His promise of there being a time for planting and a time for harvest. Because of His promise, in the spring it is ordinary to see dormant seeds come to life. That which was once buried in the grave of winter breaks open through the sod and arises to new life. However amazing it may be, it is an ordinary event that we can observe every year.

It would not, however, be an ordinary thing for someone who had died to arise from the grave after three days. Nor would it be ordinary if he would live a normal life for forty days and then be lifted up into the skies never to see death and decay. It is so extraordinary that if it happened it would continue throughout the world’s history to be a very important event—an event that would be spoken of throughout the ages. Who has ever heard of a man dying, rising to a deathless life, and then becoming the founder, foundation, and center of a religion? Yet that is exactly the message of Christianity.

Do not take the central truth of the Christian religion for granted. It is not sufficient to attend church on Easter Sunday and then go back to your ordinary routine of life on Monday as though nothing happened.

If Christ had not been raised, there would be no gospel. Jesus of Nazareth was a mere mortal who died as a martyr for a holy cause. His body would be buried in a Palestinian tomb. Perhaps for a time some would make a pilgrimage to His grave as people do to the grave of Muhammed. We would however be still steeped in our sin and remain unreconciled to our Creator. Then Jesus was either a misguided idealist whose life ended in bitter tragedy or a deceiver who declared Himself as the Son of God who miscalculated the probable course of events.

If Christ had not been raised, then our faith is vain. We would be cherishing a delusion and chasing after the wind. We would be like those who fall asleep hungry and dream of sitting at a great banquet table filled with all kinds of delicious delicacies. Oh, what a wonderful dream! But when they wake up they are still hungry. If our faith in the risen Lord is in vain, there would be no victory over death, no assurance of pardon for our sin, no reconciliation with God, and no promise of life eternal.

If Christ had not been raised, then those who have fallen asleep in Christ have perished. Paul, Peter, John, and all the rest of the heroes of faith have perished forever. We know nothing of their present condition. Mary Magdalene, who loved Jesus, and Mary, the mother of Jesus, have entered the dark valley of death alone. Our loved ones who had placed all their hope and trust in Jesus were but misguided souls. We can offer no comfort as we stand at the open grave of a believing family member. A dreary funeral dirge would replace the song of hope. What a gospel of despair. Indeed, as Paul writes, we are to be pitied more than all men (1 Cor. 15:19).

But Christ has been raised from the dead!

It is no longer the darkest, gloomiest day of hopelessness. Think of what the Saturday after the crucifixion must have been like for the disciples. They had hoped Jesus would be the One who would redeem Israel. The hope that had once sent them out two by two had faded into nothing. Peter’s words, “You are the Christ, the Son of the living God,” were empty and meaningless.

Then suddenly everything changed. “There was a violent earthquake, for an angel of the Lord came down from heaven and, going to the tomb, rolled back the stone and sat on it. His appearance was like lightning, and his clothes were white as snow.” The guards were so afraid of him they shook and became like dead men.

Since that first day of the week so many years ago, the church has constantly borne witness to the glorious fact of the resurrection by singing, “Christ is risen! Hallelujah!” The echo of that victorious hymn resounds in the heart of every true believer on every Easter morning.

Early Christians would greet one another with the words, “The Lord is risen!” and respond, “He is risen indeed!” The resurrection of Jesus was not just an ordinary fact—like the sunrise or springtime—to them. Nor can it be ordinary to us! Wrapped up in the miracle of the resurrection of Jesus Christ is our comfort, our assurance, our inspiration, our life view, our world view, our all. It is the anchor of all our hope for this life and for the life to come. 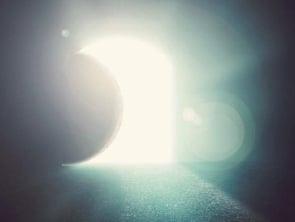 The fact of the resurrection makes Christianity the one religion of triumphant certainty and joyous conviction. It lifts the believer out of gloom and doubt. It is the triumph of light over darkness, day over night, life over death. It is the witness of God to our justification. It is assurance from heaven that those who believe are accepted into fellowship with God. It is the secret of new life through the power of the Holy Spirit. It is the guarantee of the ultimate resurrection of the whole creation that now groans while it patiently awaits the new Jerusalem.

The risen Lord is the firstfruits of those who are asleep. They may seem gone, but they are with the risen and ascended Lord. He keeps them safe with Him until the hour strikes when He comes again to bring all His elect with Him into eternal glory.

The fact of the resurrection is never just an event that happened sometime in history long ago for the person who has repented of his sin and hungered after righteousness. To him it is the core of his comfort. He realizes that in raising Jesus from the dead, the Father has set His approval upon the atoning work of His Son accomplished upon the cross of Calvary.

The penitent sinner has no difficulty in acknowledging the resurrection. Such an extraordinary event has become indispensable to him. He needs a Savior who has faced the wages of his sin and claimed victory over them by rising up from the dead. Is Jesus the risen and living Lord to you? Does He live in you?

The tragedy of much of modern Christianity is that it only nominally celebrates Easter. Dressed in new spring garb, we prattle about the reawakening of nature. We wipe the chocolate from around our mouths as we talk about spiritual values. We get snapshots of the children with the Easter Bunny while whispering about the immortality of the soul. There is something left of the form of godliness but a denying of the power of it.

By faith we are to receive the supremely important fact of the bodily resurrection of Christ. We need to make our pilgrimage every Easter, every Lord’s Day, every day to the empty tomb and realize anew that it is only by the power of the risen, living Christ that we can be lifted above the power of sin. Because He lives we can live a life of fellowship with the sovereign God who lives and reigns forever.