On Monday afternoon around 4:00, a tornado 200 to 300 yards wide tore down Beech Ridge Road in Beaufort County, North Carolina, a peaceful rural road where I spent the latter part of my youth and still consider home. My family and I moved into a solid, beautiful house about half a mile back from the road back in 1999. I spent several years and summers there and many more vacations and holidays, building treasured memories and enjoying the people dearest to me in this world. My sister Elyssa (now eighteen) has known no other home.

Not long after we moved to the Beech Ridge house, my sister Carla married her husband, Mark. They eventually purchased a dilapidated property about two miles down the same road. Over the years, and with a lot of work, Mark and Carla cleaned up the property and the house situated on it, rebuilt the barn, planted trees and a garden, and made for themselves a life. Over the years they had six children, including one set of twins, and have a seventh child on the way.

Tornado watches and warnings are relatively frequent in eastern North Carolina. We pay attention to them but don’t let them upset our routine too much because nothing ever comes of them, or they are always somewhere else.

That afternoon my sister was homeschooling her son Daniel (age 7) when eleven-year-old Joshua, who loves watching and learning about weather, burst into the house and told her that he saw the tornado from the porch. Carla thought he was probably exaggerating, but when he insisted, she followed his lead and gathered the children in the bathtub: Joshua, Josiah (9), Daniel, Hannah (4), Judah and Micah (2). Carla is due to have a baby next week. 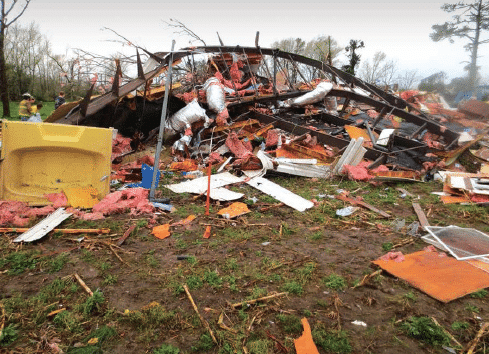 While this was happening, Mark was in the barn. He heard a noise but didn’t realize it was the tornado until he saw debris blowing. Looking outside, he saw the tornado coming from behind a wood, only a few minutes away. He quickly told the neighbor (who lives in a house on their property) and then ran to tell Carla and the kids. Mark made a snap judgment that this was a tornado his house—a doublewide—was not going to withstand. He yelled to everyone in the house to get out and run to a deep ditch about forty yards from the house (on the opposite side from the barn).

Carla told me she thought this probably wasn’t a very good idea. “Isn’t it better to be in here than to be outside, or even to be caught running when the tornado hits?” But the boys, she said, didn’t hesitate, and she followed their lead. Mark grabbed one of the twins, and seven-year-old Daniel grabbed the other. As he ran out the door and across the front yard, Mark said he saw the tornado begin to chew up his barn, about a hundred yards from the house. It was about twenty seconds, he said, from when he told everyone to get out of the house, to the point the tornado swept over their heads and over the ditch.

Carla was following, but she realized that Hannah, still groggy from a nap, had gone back to her room, possibly to get her shoes. Carla went back and told Hannah she had to run in bare feet. Holding Hannah, she climbed or jumped off the three-foot-high front porch—she doesn’t remember how but she somehow injured her leg in the process. Being full-term, she had to put Hannah down. She took her hand and they began to run toward the ditch as fast as they could move.

About half-way to the ditch Carla felt the wind pick up and said she realized they wouldn’t make it. She lay down and covered Hannah as the tornado swept over. Carla tries to describe what happened during the next few seconds but says she doesn’t entirely know. What she does know is that she saw a large cedar tree crash to the ground and land only a few yards away from them. The tree then swept toward them and she felt it slam against her shoulders. The next few seconds, she says, she was thrown around like a little child caught in the ocean’s waves, branches clutching and scraping her. All she could do was repeat the prayer “Lord save me!” She held on to Hannah, but the little girl was pulled from her arms.

Then it was over. Hannah was beside her and the wind was dying down. She saw a snake lying in the grass. They got up and moved toward the ditch just as Mark and the boys were getting out. This was the first moment Mark realized that not everyone had made it into the ditch. “Is everyone OK? Where is Joshua?” Joshua was still in the ditch, extricating himself from part of a tree that had landed on top of him when the tornado swept over the ditch. Everyone was alive.

But the house was gone. Literally gone. Most of the foundation was still there, but the rest of the house consisted of a pile of rubble several dozen yards away. The tree that had swept over Carla and Hannah was lying in an adjacent field. The top story of the barn was gone, and only one wall remained of the rest. The van was upside down and the car totaled. The entire property, including most of its beautiful trees, was entirely laid waste. In this picture you can see the bathtub in which Carla and the kids had taken shelter before Mark told them to get out.

The tornado didn’t stop there, of course. My younger sister Elyssa was reading in the living room of my parents’ house when she heard my Mom, who thankfully was not napping in her upstairs bedroom as she usually does in the afternoon, yell that a tornado was coming. Glancing up, she could see the tornado out the front window, sweeping towards the house. They took shelter in an interior bathroom.

Within two seconds the tornado hit the house. It tore off half the roof (above my parents’ room and my old bedroom) and sent the top of the massive chimney crashing through the back deck. Huge trees were down everywhere, and a barn full of massive farm equipment a few hundred yards from the house was completely destroyed, but just about everything inside the house was fine. It was pouring rain, of course, so that would not last long. Mom and Elyssa could see the tornado moving down the field away from the house.

Almost immediately neighbors, friends, and folks from our church began to arrive. A pale-faced man with a quivering lip told Mom that Mark and Carla had lost everything, but that they were OK. They went to see Mark and Carla and found Carla in a brace with an ambulance getting ready to take her to the hospital. No words can describe the entirety of thoughts and emotions, of course. Only “‘Thank You Lord,’ a hundred times in the ditch,” Carla said. Carla had felt the baby move inside her, so that gave her great relief. Her face covered in grime, she said to my weeping mother, “We’re OK, Mom. Everyone’s OK.” Hannah had blood coming out of her ear but seems to be fine. Carla’s whole body still aches with pain, and she is covered with bruises and scrapes, but aside from that, the doctors determined, she and the baby are fine. She came home from the hospital on Tuesday.

Soon well over a hundred people were helping my parents (my Dad had come home) save their possessions from the rain, and were looking through the rubble of Mark and Carla’s house to see what could be salvaged. There was little in the latter case, but there were some things to be saved. The boys found a precious piece of jewelry that both my older sisters wore at their weddings and that my younger sister wore as a bridesmaid at mine. With the help of the neighbors my parents have saved just about everything of value from their home, though it is clear that the house itself is finished.

There is no doubt my brother-in-law, Mark, saved his family. Thank you, Mark, for your wisdom and decisiveness. The boys were so courageous, taking care of themselves and helping their younger siblings at the same time (seven-year -old Daniel was an absolute hero, carrying his two-year-old brother all the way from the house to the ditch!). And Carla no doubt saved little Hannah’s life. But our loving God, whose ways are mysterious and beyond understanding, saved them all. Our Lord, who did not think it too much to take on human flesh and pay the ultimate price for our sin, continues to show us mercy in ways that can only look to us like the miraculous.

God is our refuge and strength, a very present help in trouble.

Therefore we will not fear though the earth gives way, though the mountains be moved into the heart of the sea,

though its waters roar and foam, though the mountains tremble at its swelling.

There is a river whose streams make glad the city of God, the holy habitation of the Most High.

God is in the midst of her; she shall not be moved; God will help her when morning dawns.

The nations rage, the kingdoms totter; he utters his voice, the earth melts.

On my parents’ living room window, where my sister Elyssa had been reading, Elyssa traced in the filth, “I will praise you in this storm.” Yes, our gracious God, our Savior. We praise you and we thank you. The Sunday after the storm, Carla gave birth to a healthy baby boy. God is good!

Matthew J. Tuininga is currently working on his PhD in ethics and society at Emory University in Atlanta, Georgia. He is licensed to exhort by Covenant United Reformed Church in Pantego, North Carolina. He can be contacted through his blog at www.matthewtuininga.wordpress.com