Fear not; I am the first and the last, and the living one; and I was dead, and behold, I am alive for evermore, and I have the keys of death and of Hades.” Revelation 1:17b, 18

John, the evangelist, is well known as one of the most beloved of Jesus’ disciples. He had his place beside the Master when they gathered at mealtime. He was selected to witness the glory of the Christ on the Mount of Transfiguration and entered the Garden of Gethsemane with him. He was the disciple who walked beside the Savior, to enjoy an intimate fellowship with him day by day.

Yet it seems that when this beloved disciple stands before this same Jesus in the vision of the Book of Revelation it is as if he has to do with an entirely different person. He falls down at his feet as though dead. for the eyes which bum like fire could consume him forthwith. He stands before the Christ who is now clothed with the glory of heaven itself. His reaction, therefore, is quite different than was previously the case when he leaned upon the breast of the Savior. Before the resurrection glory became the actual possession of the Christ John could fellowship with him. But after the resurrection this relation seems to have changed.

To be confronted with the risen Savior and to see his glory is, indeed, to be properly filled with fear and anxiety. The glory of the risen Savior is the glory which is his by divine right. “The glory which I had with thee before the world was,” is that which makes even the apostle John to be filled with awe and to fall as one dead at the feet of the glorified Christ. O God, who can stand before thee and is there one who can withstand the brightness of thy glory? Coming before thee we can do nought else than fall down at thy feet, silent and penitent.

This relationship between the glorified Christ and the prostrate disciple is recognized and also emphasized by the Savior. This essential distinction between the finite and the infinite must be impressed upon the hearts of his disciples. “I am the first and the last and the Living One.” I am the eternal one whose dwelling is above all in light that is unapproachable. Before me men must all bow, yea, must become as dead men at the revelation of my glory.

For the self-conscious Christian such revelation of holiness is made the more awe-inspiring and fearful when seen in contrast to himself. To stand before such holiness and to see the glory of such purity is to be convicted anew of sin and uncleanness. “Who shall ascend into the hill of the Lord and who shall stand in his holy place?” The word of the prophet is laid again before us: “Woe is me for I am undone, for I am a man of unclean lips…and mine eyes have seen the King, the Lord of Hosts.”

If that is the way we stand before the risen Savior there is little comfort for us in the revelation of his glory at Easter. We, too, would fall as dead men for fear before the manifestation of the glorified Christ were it not for the fact that a word of comforting reassurance is given to all his trembling disciples. Fear not is the message of the great Shepherd of the sheep when they come before his glory. It was so in the fields of Ephrata and again on tile morning of the resurrection. And it is so today.

To the sinner standing in the brightest light of the glory of a perfect holiness there is every reason to fear! But to those who make humble acknowledgment of sin in confession there comes the blessed word of assurance and comfort. Be assured. O trembling disciple, that this gloriously risen Savior is indeed the same Jesus who died. To separate the glory of Easter from the fact of Calvary is to lose the comfort of both. “I was dead, and behold I am alive for evermore.” Herein is matchless comfort for the Christian standing before the glory of the resurrected Christ.

“I, the living one, was dead.” This is the mystery of the passion. A mystery which is explained by the fact of our sin. The fearfulness of his death is an infallible commentary on the awfulness of our sin.  “. . . having been once offered to bear the sins of many . . . is the context of his death. In the light of this context the disciples of the Lord stand before Calvary with a confession of sin and a song of praise. Herein is perfect love displayed; “But God commendeth his own love toward us in that while we were yet sinners, Christ died for us.” 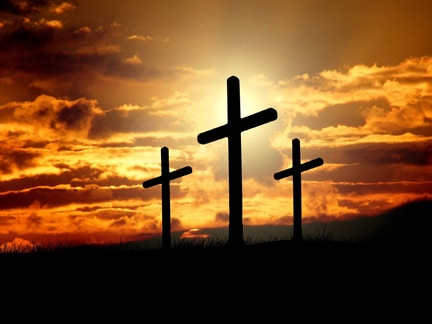 It is against this background of Calvary that we must also view the glory of the resurrection. For he “shall appear a second time, apart from sin, to them that wait for him, unto salvation.” Behold I am alive for evermore as mediator for my people. I am the victor over sin and death for my disciples. Fear not, therefore!

It is the fact of glory by way of the cross which is the hope of the Christian in Christ. Herein is established for us his power over death and his promise of a blessed resurrection. Even death itself must serve the purpose of the risen Savior and further his cause. Death, too, is in his hand for he has entered the house of the strong man and has slain him.

Because this is true, therefore death is no more a punishment for sin for us. The sting of death has been removed by the Christ who died and it remains for us only as an entering into eternal life. “Behold, I am alive forevermore.” Because he lives, I, too, shall live!