“And Hilkiah answered and said to Shaphan the scribe, ‘I have found the book of the law in the house of the Lord.’ And Hilkiah delivered the book to Shaphan.” (II Chronicles 34:15)

One of the most godless kings ever to rule in Jerusalem was King Manasseh. An attempted reformation among the people by his father, King Hezekiah, did not leave much of an impression upon King Manasseh. No sooner did King Manasseh take the throne and the Bible tells us, “He began to do that which was evil in the sight of Jehovah.” Manasseh rebuilt the high places that his father had torn down. He erected altars for heathen gods. He worshipped the sun, moon, and stars instead of the Creator of them. Certainly King Manasseh grieved the one, true, living God.

Worse than all of this was that the king did not just bring this hedonism upon himself; he dragged down the people of Judah with him. He had not learned anything from his father’s attempt at reformation. It got so bad that, according to II Chronicles 33:9, the behavior of the people of Judah was worse than that of the people whom the Lord had driven out. For all of this, the anger of Jehovah was kindled against the king and his people.

It is true that King Manasseh repented late in his life and that among the people there was a measure of conversion. However, when Manasseh’s son, King Amon, took the throne, it started all over again.

That is the way it was when Josiah became king. His father, Amon, was assassinated when Josiah was only eight years old. Josiah was then made king. How different he was from his father and his grandfather! As young as King Josiah was, he sought to serve Jehovah, the God of Israel.

Early in his life, Josiah began to seek the God of his forefather, David. He began to purge Judah of all its idolatry. When he was a little older, Josiah raised money through free-will offerings collected by trustworthy men in order to restore the temple in Jerusalem, which had fallen into a state of disrepair during the reign of his father and grandfather. When he was twenty-six years old, and after eighteen years as king, Josiah presented the money to the high priest, Hilkiah, through the scribe, Shaphan.

When Shaphan arrived with the money, Hilkiah had some startling news that illustrates how far the people had wandered away from God. Hilkiah reported, “I have found the book of the law in the house of the Lord.” In order to find something, it must first be lost or misplaced. In other words, the Word of God had become a relic of the past. The Word of God had become so ignored that the rediscovery of it is recorded in II Chronicles as big news.

Remember that the Law was given by God to Moses. Part of that Law was that it was to be read and discussed by the people on a daily basis (Deuteronomy 6:6–9). The people had no excuse for not knowing the Law. There was no excuse for their ignorance. Apparently, the people had failed to keep even the one small part of the Law that commanded that they read the Law. The natural result was the Book of the Law had become a forgotten book collecting dust in some dark corner of the temple.

Upon rediscovering the writings of Moses, Hilkiah dusted them off and presented them to Shaphan the scribe, who in turn brought them to the king. King Josiah, in turn, had the Law proclaimed to the people of Judah. The rediscovery of God’s Word began a reformation within the land of Judah that lasted all the days of King Josiah.

The events of the reformation in Judah are very similar to what happened at the time of the Protestant Reformation. There, too, the Word of God was rediscovered. It had been buried under a pile of dust— the dust of tradition and man made rituals. By the grace of God, there were men who dusted off the Word of God and gave it back to the people.

Martin Luther, teaching Bible students in Romans Catholicism, was struck by the words of the Apostle Paul in the Book of Romans: “By grace you are saved, apart from the Law;” and “There is now no condemnation for those who are in Christ Jesus.” Grace! Amazing grace! Further study led Luther to read Paul’s words, “Through Jesus Christ, we have peace with God.”

This wonderful rediscovery of God’s Word led to a new proclamation: “My only comfort is that I am not my own, but belong body and soul, in life and in death, to my faithful Savor, Jesus Christ…He has freed me from the tyranny of the devil.” Incredibly good news based upon the truth of God’s Word. 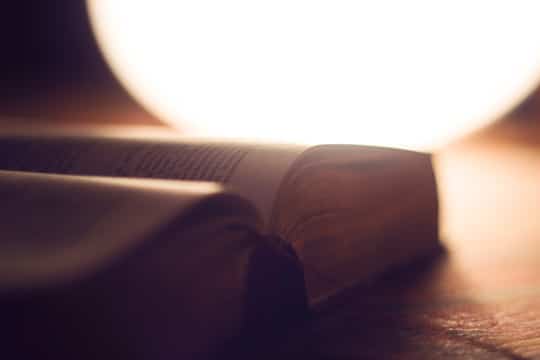 New words began to creep into the vocabulary of the reformers and soon these words were proclaimed in the church: Assurance, Comfort, Grace. The Book of God was dusted off during the Reformation and once again men began to preach the whole counsel of God.

All around us today we see, once again the Word of God collecting dust. In fact, instead of just placing the Word of God in a corner where it will gather dust, our society has been very actively trying to bury the Word of God deeper and deeper in the dust and dirt of this world. It is not just the world that is doing this. Those who stand in the tradition of the Reformation are also experiencing a sharp spiritual decline. It is among the children of the Reformation that the Word of God has once again been allowed to gather dust. For many, the Bible has become a relic of the past with nothing to say to our modern times. Others deny placing the Scriptures on the shelf, but in their hearts they agree that the Bible is not always relevant to the needs of today. Discussions at major assemblies are based on feelings rather than rooted in Scripture.

Sinful human reasoning has set itself up as the judge of God’s holy Word. Man decides, through his own sinful reasoning, what is true and what is myth, what is factual and what is legend, what is relevant and what is not. Our view of Mankind is based upon scientific discoveries made by sinful man rather than the truth declared to us by God.

When is the last time you heard the Law of God read in your church? Have you ever wondered why it is no longer read in many churches today? Is it because we know it so well? Is it because we no longer need to hear it? Is it because we keep it so well? The Law of God has become a relic of the past, collecting dust, because we are told by psychologists we no longer have guilt; we only have guilt feelings. Mass murderers and rapists can not help themselves because they are a product of their environment. Alcoholics and homosexuals can not help themselves because they are born with those tendencies.

Preachers love to preach from Martin Luther’s favorite verse: “There is now no condemnation,” but they forget the last part: “for those who are in Christ Jesus.” How clear it is that we have, as in the days of King Josiah and Martin Luther, allowed a thick layer of dust to gather upon the precious truth of God’s own Word.

If we are to be worthy heirs of the Reformation, we must constantly be on guard. Our calling is not to reform the Church of Jesus Christ by means of every wind of doctrine that comes along. Rather, we are called to reform our hearts but back to Jesus Christ. We must go back to the belief that every word of the Holy Scriptures is God breathed and useful for instruction even in our society today. We must hear the Law in order to recognize ourselves as sinners that we might be ever thankful to the gracious God who has provided us with His only Son as our Savior.