The Word of God has a way of transforming people’s lives because it connects them with the reality of the God who created them and who acts in history and with Jesus Christ, our Savior. One dramatic story of a people being transformed through Scripture concerns a small tribe of people in Papua, New Guinea, called the Binumariens. The change agents were Des and Jenny Oatridge, a young couple with Wycliffe Bible Translators, who, with their baby daughter, went to live in a village among the people.

Some ten years later, around 1970, I met Des and Jenny. They had been busy learning the unwritten language of the people, committing it to writing, and translating the Bible so they could read the Word of God in their mother tongue.

When Des and Jenny moved in, the tribe faced certain extinction. It was probably one of the smallest language groups in the whole of PNG. The Binumariens had been decimated by warfare and expulsion from their tribal land. From an estimated three thousand people, they numbered only 111 when Des and Jenny arrived with ten-month-old Ruth. When their other three children were born, they too lived in the village over the course of the translation project. 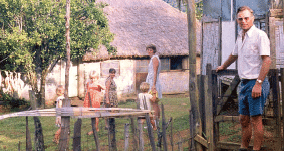 Des and Jenny had purposely chosen the smallest language group they could find because they wanted to demonstrate that God also cares for the weak and insignificant. That was the way the surrounding tribes thought of the Binumarien people.

In 1975, I, along with my wife and three infant children, had the privilege of visiting Des and Jenny. We slept in their thatched house and visited folk in the village in their grass homes.

Des was a great storyteller. One unforgettable incident he tells dramatically shows how the people of the village came to realize that Jesus Christ was a real man who lived at a particular time and place on this earth. This changed their whole attitude to the gospel.

The remarkable event is described in a book about Des and Jenny by Lynette Oates called Hidden People: How a Remote New Guinea Culture Was Brought Back from the Brink of Extinction. I’ve reproduced the story here to illustrate how the power of the gospel of Jesus Christ is unleashed when people realize that the Word of God is true, that it describes events that actually happened in history.

When Des told Jenny, “We finished the last of Matthew today,” she replied, “What about the first seventeen verses?”

Oh, yes. Those uninteresting verses that told of Jesus’ ancestry back to Abraham. They had to be tackled before he had really finished the book.

Surprisingly, Sisia, Des’s language helper, sailed through the long genealogy without a trace of boredom. He made no comment on the translation as he often did. But when he rose to go, he said with some deliberation, “There’s going to be an important meeting in Nameepi’s house tonight. I want you to come and bring what we’ve done today.”

Des wondered, “What’s he up to? Why a meeting tonight? Perhaps he wants to celebrate finishing Matthew. But why does he particularly want me to bring what we’ve translated today?”

That night, Des took the lantern and walked the short distance to Nameepi’s house, just above his own.

He walked into the central room to find it already filled to capacity. All Sisia’s family were there around the fire. Two other rooms, off to either side, were also packed with people. Des had never seen so many packed into a house before. There was also an odd sense of tension in the air that made him nervous.

He was led immediately to a seat on the floor beside the fire. Sisia took command and spoke in his usual authoritarian voice.

“I have asked Mata’a Des to come and read what we translated this morning. I can’t tell it to you. I want you to hear it for yourselves.” The room became extraordinarily still. Des was conscious that all eyes were focused on him. He cleared his throat and began to read: “These are the ancestors of Jesus Messiah, a descendant of King David and of Abraham. Abraham was the father of Isaac; Isaac was the father of Jacob; Jacob was the father of Judah and his brothers; Judah was the father of Perez and Zerah . . .”

Des could not look up. His eyes were glued to the text. He was trying to read as naturally as Sisia had spoken the sentences to him that morning, but the tense atmosphere in the room made this difficult.

He did not see Fofondai’s eyes grow wider and rounder, as did Maraa’aro’s and several others’ near him. He could sense, though, that every word he spoke was being grabbed and critically examined by the listeners.

He became conscious that Yawo was moving near to him. So were A’aaso, Aaka and Yaa’a. He was aware Sao watched his lips unblinkingly. As he continued reading, more and more people began pressing. The people from the other rooms were pushing into the central room. Fofo was so close that his beard almost touched the written page. Yawo’s arm was rammed right against Des’s. Des suddenly felt scared. He had a sense of being crushed. It was not only the pressure of bodies; it was the uncanny silence. It seemed that not a dog barked, not a baby cried, not a person released his breath.

He did not know if the list of names offended some ritual taboo about which he knew nothing. If so, and the people were angry that it was being so blatantly publicized, he was in an awkward position. There was no way of escape, hemmed in as he was. And with the atmosphere so charged, he felt he dared not ask a question. These people were so volatile; they could erupt in a fury so easily.

They had heard him out.

Des raised his eyes to look at those within a breath of his face—and saw not anger, but incredulity. “Why didn’t you tell us all this before?” Yaa’a demanded.

Des recoiled instinctively as if he’d been struck.

“No one bothers to write down the ancestors of spirit beings,” Fofondai stated.

“Jesus must be a real person!” someone else cried, his voice ringing with astonishment.

Then everyone seemed to be talking at once. “Fourteen generations, that’s two hands and a foot, from Abraham to King David . . .”

“This ancestry goes back further than ours.”

“Yes, none of ours goes back two hands and a foot three times.”

“Jesus must have been a real man on this earth then. He’s not just white man’s magic.”

“Then what the mission has taught us is real.”

Yes, real. Des pondered on that as he made his way home. The ancient list of names that he had always found boring and pretty well meaningless had ratified Jesus as a real person to his unlettered friends. He possessed a genealogy like their own! To the Binumariens, the truth of the Scriptures was now beyond doubt.              Article reprinted by permission from Creation Ministries International (Creation.com). Dr. Tas Walker works full-time for Creation Ministries International (CMI) in Brisbane, Australia, where he is employed as a researcher, writer, and speaker. He has authored many articles in both Creation magazine and the Journal of Creation.