The clock in the belfry of the small church across the pond sounded loud and clear. It had just struck the midnight hour.

The midnight concert was in full swing. Katydids in the trees were serenading the insects below, the violin section of crickets sounding off on the high notes. The cymbals of cow bells in the meadow, the barking dog in the distance all join in the harmony. The back ground music furnished by the hoot owl, and not to forget, natures own boom box, the bull frog in the pond completed nature’s midnight choir. Unknowingly, the creatures were praising their Creator.

Rocking alone in that old creaking rocking chair I gazed out on what seemed to be a world at peace. The psalmist, years ago, remembered and thought on the days of Old — Psalm 143. Many thoughts went through my mind of days long gone by, which brings me to….

No narthex, we went right into the Sanctuary. Silence prevailed. Some early comers were praying, some reading the Canons of Dort, Bibles or what ever. You could hear a pin drop. If any Civil War Veteran were there he would have been reminded of “The stillness at Appomattox.” It was an atmosphere of reverence in the house of prayer. 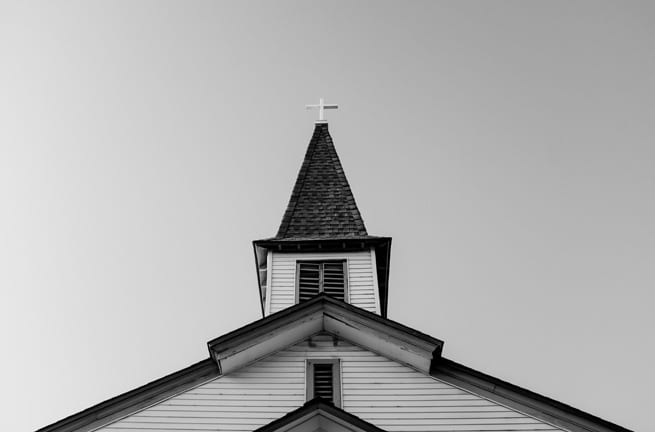 The service is about to begin, the congregation is comfortably seated on the hard wooden slide easy benches. No padded seats in those days, except for a few ladies who preferred to carry pillows from home.

The sermon was an hour, more or less, mostly a little less. This proved to be a grueling and uncomfortable experience for the restless and weary ones on those hot summer days. Sit still or else, while the man on the platform kept throwing his bait across that sea of humanity before him. After all, ministers are fishers of men. We kids sat through all this.

The cooling system was hand powered by those who felt the need. Fans were furnished free through the generosity and courtesy of the funeral directors, Joldersma and Klein and the Langeland Brothers. On one side of the fan was a beautiful picture of the Good Shepherd, the other side a picture of the funeral parlor plus their ad. That created a little stir among some of the oldsters. Advertising on the Sabbath and of all things in the house of prayer! This was competition with the Kalamazoo Gazette and the Hollandsche Amerikaan. It soon blew over by a non spiritual wind. The fans remained in the pews, and the funeral directors are still with us, doing business as usual.

The difference is as great as night is from day. What’s this I hear? “Just an old Fogey” You are right. The 20th century was only eight years and eight days old when I arrived.

How times have changed. The beautiful new church buildings of today have under one roof, what is known as the narthex, a sort of outer court, where people gather in groups to tell one another about their experiences of the past week. Just stand still and listen. It’s Tom, Dick and Harry trying hard to out do Sue, Liz, and Mary. With everyone talking through each other it sounds like an “after wedding” party celebration, or sad to say, like a county fair. All this shatters the silence and the stillness of the sanctuary. Conducive to worship? You are the answer.

At 94, Mr. Janus Vaar is the second oldest member of the Covenant United Reformed Church in Kalamazoo, Michigan.