If you are reading The Outlook, this new year, 2016, is an important year in which to remember our Lord’s faithfulness and His blessings. On February 21, 2016, Reformed Fellowship and The Outlook will celebrate their sixty-fifth anniversary.

For many years Calvin Theological Seminary had been publishing a weekly magazine called The Outlook. As 1950 approached, a number of Christian Reformed ministers and laymen became concerned about some things that began appearing in that publication. It was then decided to form an organization that would publish an alternative magazine devoted to upholding and defending the Reformed faith. This would be an avenue to counter those things being published in The Outlook at that time that were contrary to the Scriptures and the Reformed confessions. 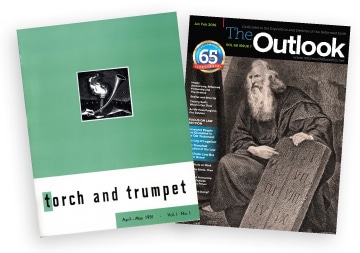 These Articles of Incorporation are signed and acknowledged by the incorporators for the purpose of forming a nonprofit corporation under the provisions of Act 327 of the Public Acts of the State of Michigan for the year 1931, as amended, known as the Michigan General Corporation Act, as follows:

Article I. The name of this corporation is Reformed Fellowship, Inc.

Article II. The purpose or purposes of this corporation are as follows: to study the Reformed faith and to develop its implications as it relates to all of human life and activity; to disseminate and defend the Reformed faith in opposition to all errors, heresies and trends of thought hostile to the development of a full-orbed and fully committed Christian life; to encourage and promote respect for the Reformed tradition by all lawful means; to publish Reformed periodicals and literature.

Reformed Fellowship then began publication of a magazine called Torch and Trumpet. The verse chosen for the magazine was Judges 7:20: “And the three companies blew the trumpets . . . and held THE TORCHES in their left hands, and THE TRUMPETS in their right hands . . . and they cried, The sword of Jehovah and of Gideon.’”

In early 2000, the name of Torch and Trumpet was changed to The Outlook. The verse was changed to Jude 3: “Exhorting you to contend earnestly for the faith which was once for all delivered to the saints.”

In keeping with the stated purpose of Reformed Fellowship, to publish Reformed periodicals and literature, the publication of Bible study materials and books by Reformed authors was also eventually begun.

Over the years Reformed Fellowship struggled, and the minutes indicate times when even dissolution of the organization was considered. In December 2001, the minutes show that Outlook subscriptions were declining and RF was twenty-one thousand dollars behind. But at that very time a very sizable estate gift was received. That is how God continually blessed the efforts of this small organization in defending the faith in the midst of a declining appreciation and understanding of the precious truths that the forefathers so vigorously defended and preserved.

Reading through the organization’s minutes shows that many of the concerns and discussions presently facing the Reformed Fellowship board are much the same as those throughout the years. God is good, and He blesses. He has blessed the small efforts of Reformed Fellowship for sixty-five years. We give Him the praise for this milestone.

We live in a time that the proclamation and defense of the Reformed faith is needed as much as ever. May God continue to bless Reformed Fellowship to vigorously do so even as our forefathers did under God’s blessings for sixty-five years.

Mr. Myron Rau      is the chairman of the board of Reformed Fellowship.

This meditation was originally published in Torch and Trumpet, April-May 1951.