This spring a front page article in The Washington Times highlighted the growing problem Americans have with money management. A coalition of more than 80 financial and consumer groups is lobbying states and the federal government to add personal finance to required high school classes and standardized tests. Our nation’s economic boom has given even young people greater access to money than ever before, yet many of them cannot balance a checkbook.

One out of every five people has trouble controlling spending, and for one out of ten it is as serious an addiction as alcohol or drug addiction.2 With credit so easy to get, people are using it instead of savings to buy now rather than wait. And in a time when consolidation and home equity loans are a common quick fix, and lottery and day trading give hope of getting rich fast, debtors deceive themselves that the day of reckoning will never come. But Proverbs 28:20 warns, “A faithful man will abound with blessings, but he who makes haste to be rich will not go unpunished.”

Surveys show that money problems are blamed in the breakup of many marriages. “Even the strongest marriages can begin to buckle under the pressure of consistently spending more than you earn,” says financial speaker and author Ron Blue.

The Christian community is not immune to the problem of overspending. The cry of many worshipers is that once the mortgage, grocery, college, and credit card bills are paid each month, there’s little extra to give to God’s kingdom. Nearly three-fourths of American church attendees drop about one dollar in the offering plate each week.3 Many of these people can be found buying lunch out every day and racking up bills on vacations and luxuries while they complain that they don’t have enough money to make ends meet. It is a poor witness to the world when followers of Christ are among those who misuse funds God entrusted to them as stewards. 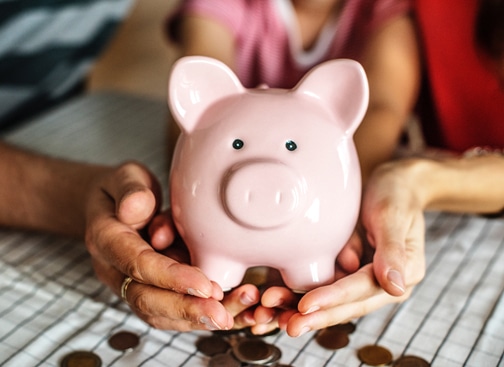 A secondary problem to debt is that of insufficient saving. America’s savings rate has fallen from seven percent in the 1980s to at or below zero today.4 Proverbs 21:20 says, “There is precious treasure and oil in the dwelling of the wise, but a foolish man swallows it up.” Those with no reserves risk being unprepared when unforeseen financial blows come, and they also have no means to help a brother in need.

The good news is that almost anyone can learn good money management skills. To be a good citizen in the kingdom, a Christian should plan his use of finances carefully. Ron Blue defines stewardship as “the use of God-given resources for the accomplishment of God-given goals.” He calls financial planning “allocating limited financial resources among various unlimited alternatives.”

2. Money is never an end in itself, but is merely a resource used to accomplish other goals and obligations. “For we have brought nothing into the world, so we cannot take anything out of it either” (1 Timothy 6:7).

3. Spend less than you earn and do it for a long time, and you will be financially successful. “Dishonest money dwindles away, but he who gathers money little by little makes it grow” (Proverbs 13:11).

As unpopular as the idea is, the place to start improving money management is with a budget. Financial counselor and author Larry Burkett explains in Crisis Control in the New Millennium, that a budget is a tool to help with money allocation, useful for achieving the long term goals of avoiding debt and saving for future needs. To illustrate how a budget works, his ministry, Christian Financial Concepts, offers a free online budget guide at <www.cfaninistry.org>. It takes a given gross income and suggests percentages for spending in 14 categories including tithes and taxes.

The average person has no idea how much he or she spends monthly. Many financial counselors advise people to write down every expense for a month so they can see where they are overspending. After this exercise, they will be better able to establish budget goals. But that is where many people stop in their resolve to change habits. Besides good record keeping they have to quit spending in excess of available resources.

So what is the point of all this cutting back, saving, and goal setting? A believer does not have to dig too far into the Scriptures to find guidelines about the use of money. More than 1,600 verses deal directly with financial situations.5 Some of these warn against letting money rule one’s life. In Proverbs 30:7–9, the writer asks God to make him neither poor nor rich, lest he either resort to stealing or become proud and forget God altogether.

When Christians follow principles of money management, they become free in their service of the King. Proverbs 22:7 says, “The rich rules over the poor, and the borrower becomes the lender’s slave.” When credit cards always have a balance, the debtor is shackled and becomes a slave to the credit corporation. His effectiveness for the King is reduced. It’s like trying to run the 100-yard dash with heavy barbells in hand.

Perhaps one of the foremost reasons for spending beyond one’s means is a lack of contentment, not trusting God to know what is best for each person. Paul talked of this level of satisfaction, as a great mystery: “For I have learned to be content in whatever circumstances I am. I know how to get along with humble means, and I also know how to live in prosperity; in any and every circumstance I have learned the secret of being filled and going hungry, both of having abundance and suffering need” (Philippians 4:11–12). How did he learn this? The answer follows in verse 13: “I can do all things through Him who strengthens me.” As with other areas where growth is needed, man can turn to the Father in prayer to ask for contentment, and trust that He will provide whatever is necessary for life.

As God’s Word is consulted on money matters, the seeker will increasingly want to use the true Owner’s resources in the way He wishes. When God’s stewards are faithful with small things, He usually entrusts them with more. The parable of the minas says, “If therefore you have not been faithful in the use of unrighteous mammon, who will entrust the true riches to you?” (Luke 16:11).

If each of us who reads this article were to reduce our debt, manage our resources more closely; and learn contentment with what God has given us, the resources that would become available could be tremendous! Think of how many people could be blessed through such stewardship, including people close to you.

One biblical use of our resources is to remember the poor. Christians are encouraged again and again in God’s Word to give to the poor. Two convicting verses read, “Each of you should look not only to your own interests, but also to the interests of others” (Philippians 2:4), and “He who gives to the poor will never want, but he who shuts his eyes will have many curses” (Proverbs 28:27). The great affluence of Americans could do so much good in places where surviving another day is a desperate struggle.

Ron Blue’s challenge to common thinking in his book of giving leaves a believer with something to ponder: “If you choose to run life’s race with an eternal perspective, that decision will be evidenced by your lifestyle… Instead of asking yourself how much money you need and then trying to figure out how much you can give out of whatever’s leftover …start by asking yourself how generous you want to be.”6

This article is reprinted from Covenanter Witness, a periodical of the Reformed Presbyterian Church of North America (RPNA), July–August/2000.

Harry Nagel is a systems engineer with STI and a volunteer budget counselor, trained through Christian Financial Concepts. He serves as an elder at Anchor Fellowship RPC in Waldorf, MD. Harry and his wife, Jeanette, a former writer for Prison Fellowship, are raising two sons in Fairfax, VA.