The late Dr. R. L. Haan, a highly-respected Christian Reformed pastor, was closely associated with the Christian junior college movement especially during the closing years of his ministry at Hull, Iowa. Out of his interest in and activity in behalf of such an educational institution he once ventured to prophesy that in the not-too-distant future a wave of enthusiasm would sweep over our Reformed people carrying with it the actual establishment of Christian junior colleges in various sections of the Christian Reformed denomination. That observation was based upon his great familiarity with the historical genesis and development of this movement.

No one has been able, we believe, with any degree of success to argue away the need for the junior college type of educational institution among us. To the contrary, as time has rolled along, circumstances have created and exerted ever greater pressure and correspondingly more and more voices have begun to cry for organized activity along these lines. Lesser waves oE interest, beaten back for lack o[ sustained strength and because of the superiority of opposing forces, have been followed by more vigorous waves, whose power finds its only explanation in those struggling elements which lie deep in the bosom of zealous, progressive Christian education proponents. Our aim in this article is to review the history of this development. 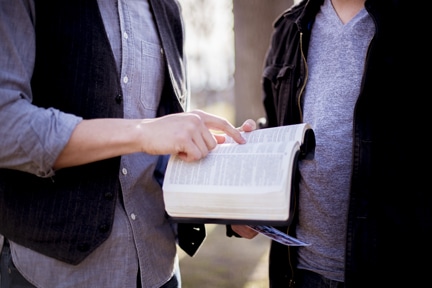 In the larger historical background of this movement one can hardly a[ford to ignore the unpleasant experience which centered about the now defunct Grundy College, which was located in Grundy Center, Iowa. Its supposed failure still casts an ugly shadow upon all subsequent attempts to establish a school for higher education by Christian Reformed adherents outside of or in addition to Calvin College, a four-year school owned and operated by the Christian Reformed denomination.

The Grundy College issue was a highly debatable one, to say the least. Nor can it be denied that Grundy enjoyed a measure of success. What is more, the most serious of the objections raised a’t the time when its future recognition and existence was questioned no longer exist. Meanwhile all the reasons then cited for its continued existence are doubly emphatic today, and, in addition, several other sound reasons are now present. It is only too sad that this noble attempt, representative of the deep love of our people [or truly Christian higher education, had to suffer the dismal experience of failure in 1931. Even worse is the undeniable fact that this experience has in many ways served to discourage all honest efforts among us to initiate movements toward the realization of the higher education ideal subsequently.

In view of this dark background of trial and hardship, is it not extremely significant as well as interesting that the very first official body to prompt new action in this respect was the classis of Ostfriesland, Iowa, in whose midst Grundy College had its location? The following is quoted from the Report of the Committee on a Junior College in the Midwest, issued in July of 1940: “At the 1938 spring meeting of the classes Minnesota, Orange City, Pella, and Sioux Center a communication from Classis Ostfriesland was read and discussed concerning the advisability and possibility of establishing a Christian Junior College in the Midwest.”

In answer to this letter from Classis Ostfriesland each of the four classes appointed a committee “to discuss the advisability and possibility of establishing such a Christian Junior College.” With this a long series of historical proceedings began. Very significant is the conclusion reached in the way of joint action by the committees from the five classes.

The joint committee met for the first time at Kanawha, Iowa on Monday, July 11, 1938. Detailed minutes of this and subsequent meetings were recorded and preserved. The following resolutions were unanimously adopted:

Resolution 1. The joint committee of the five classes recognizes that our Christian Reformed people in the Midwest need a junior college based upon a positively Reformed basis. (Four grounds are then given, which we shall have opportunity to refer to in a later article, B.J.H.)

Resolution 2. To take steps toward the realization of a Christian junior college in the Midwest.

A. The Classes to adopt the above resolutions.

B. The classes to re-emphasize the necessity of primary, secondary and higher Christian instruction.

C. The classes to appoint a joint committee:

1. To contact Calvin College to the end that only such steps be taken in the organizing of a junior college in the Midwest as are consistent with the welfare of Calvin College.

2. To map out, and to submit a program of action which, with God’s blessing, may lead to the establishment of a Christian junior college in the Midwest.

All the members of this committee, representing five classes, voted in favor or these resolutions.

Upon approval of the five classes, the joint committee made contact at once with the board of trustees of Calvin College, asking (or cooperation in this venture. To this request that board gave, in summary, the following reply in a letter dated June 29, 1939. In this reply the Calvin College board indicated that although they were convinced of the need, yet (or various practical reasons, such as the large financial burden a Christian junior college would entail, and the fear that Calvin’s future progress and support might be jeopardized, they could not encourage the Midwest classes to go ahead.

This by no means satisfied the joint committee. Consequently the joint committee pleaded for a meeting with representatives of the board of trustees of Calvin College, convinced that these so-called “practical difficulties” were contrary to fact. To re-enforce their plea several arguments were presented which, to this day, have never been overthrown.

The board of Calvin College agreed to meet with the joint committee. On July 10, 1940, the following members representing the Calvin College board met with the joint committee at Hull, Iowa: the Reverends Lambertus, J. Lamberts, Jan K. Van Baalen, and Daniel Zwier. After a lengthy discussion of all available materials pertinent to the subject, the representatives of the Calvin College hoard promised that they would request that board to take up the matter once again, and would present then their conclusions in a formal report. In the meantime it was mutually agreed to continue emphasizing the need for Christian higher education in the churches.

At this moment in the history of the movement several things factored to temporarily halt all further action. These were occasioned, of course, by the entrance of our nation into war with Japan. We are all well acquainted with the effects of war upon college life. Enrollment at Calvin and all colleges dropped rapidly.

It is hard to imagine what would have developed within the years 1940 to 1945 if war had not interrupted the work. And it must not be forgotten that by the time war conditions had ceased, so too the labors of the leading spirit in the junior college movement had come to a close. We refer again to the late Dr. R. L. Haan, whose retirement came in 1943, after having given so much time and study to this project.

Immediately after the great international conflict ended, there arose a resurgence o( demand for the Christian junior college. At this time, however, it came about through other channels. Why the five Midwest classes did not resume united activity remains unknown. But now the Christian school leaders and supporters began to clamor for recognition. The Christian School Alliance of Northwest Iowa, Minnesota and South Dakota formed its own junior college committee, whose unstinted labors deserve the highest praise. It is interesting to note from the records that after much research and after hours or discussion the Alliance committee recommended that their organization take their problems to the classes in their district. This recommendation met with a favorable response on the part of the Alliance.

What the Christian Reformed synods have done with this matter subsequently has been well publicized. As is customary, the 1946 synod appointed a study committee mandated to bring a report in two years. Things took on a favorable aspect for the junior college cause when this committee unanimously argued in favor of the idea through its report. We feel that this was a very thorough report, which called for certain positive steps. Why synod could not find rest in the recommendations of this committee is difficult to answer.

Fact is that synod brushed the report aside and appointed another two-year study committee.. In 1950 this committee returned with a recommendation practically the opposite from that of the previous committee. To analyze this committee’s report and to criticize it is not the intent of this article. Suffice it to say that the very heart of this report was a questionnaire which the committee had sent to the consistories of the Midwestern churches, particularly in Northwest Iowa, Minnesota and South Dakota. We believe that this contributed the most toward making up the mind of synod.

The questionnaire was directed, we said, especially to’ the consistories of Northwest Iowa, Minnesota, and South Dakota, where interest in a Christian junior college was highest. This questionnaire asked these consistories to indicate how great the desire for a junior college was in the consistory itself and in the congregation which they served. They were also requested to estimate how much money their people would be willing to give for the establishment of such a school. The reported results from those questionnaires which were filled·in seemed to indicate that there was not a strong desire for such a school, and certainly that there was very little willingness to contribute financially.

The fairness of this type of approach to the consistories is not only very questionable, but the conclusions were certainly contrary to fact. For one thing the consistories were at a distinct disadvantage as far as their ability to judge the measure of interest and support was concerned. More distressing still is the fact that the real life and pulse of the junior college movement was by-passed. For example, the Christian School Alliance was not so much as contacted. Nor did this committee approach the various classes.

When the need is genuine, and 25 to 45 percent of the people stand ready to form a nucleus of zeal and enthusiasm with which leadership might easily begin to work, is such interest not of such tremendous importance that we ought to go ahead’ How many present day Christian educational projects have not had at the time of their earliest beginnings a smaller percentage or support? How many of these now well-established schools have not experienced the handicap of, and yet have overcome, seemingly unsurmountable obstacles? Compared with these the Christian junior college movement in the Midwest area finds today a field rich and fertile.

Although synod had thus spoken, the junior college movement did not disintegrate. On the contrary, two things happened. The 1951 California convention of the National Union of Christian Schools brought the issue on the table and enjoyed a lively discussion of it. A committee to study the matter further and to report back in 1952 was, as a consequence, appointed. Another important event takes us back to the Christian School Alliance of the Midwest. In the fall of 1951 the Alliance went on record as enthusiastically favoring the establishment or a junior college in its area, and it appointed an enlarged committee to prepare the way for its realization.

Since that time this area has become alive with interest. This wave of interest seems to have the strength and proportions which the late Dr. R. L. Haan had prophetically envisioned. Contributing to the strength of this wave is the support officially given the movement by certain resolutions adopted at the 1952 Chicago convention of the National Union of Christian Schools.

These historical developments add up to but one conclusion: the Christian junior college is on the way!