Mr. and Mrs. Jones walked into the counselor’s room with smug looks on their faces. They almost let the door slam in the face of their early-teenage son Sam and his younger sister Emma. As the family sat down, the parents locked eyes on their kids as if to say, “We all know you’re why we’re here. Go on and tell the counselor how you are.”

And in truth, the kids had been misbehaving at school. Their church family, too, knew things were not well. Less obvious was the unhappy home the Joneses were cultivating. Mr. Jones, a successful business man, expected everyone else in the family to live up to his unreasonable standards. Mrs. Jones, frustrated and overwhelmed by her husband’s heavy work schedule, had made a habit of yelling at their kids and highlighting their failures.

The Joneses had forgotten Colossians 3:21, “Fathers, do not provoke your children, lest they become discouraged.”

It is tempting to blame children for our family problems. But Scripture does not allow us to do this. Children bear the responsibility to obey their parents. But God commands parents to raise their children with godly nurture, being careful not to frustrate them. Inestimable damage is done by parents who provoke their children and cause them to become discouraged.

Who Is God Addressing?

While specifically addressing fathers, God is speaking to both parents. The word translated “fathers” is elsewhere used to mean “parents” (Heb. 11:23). Additionally, fathers are spoken to as covenant heads of the families. Fathers are to see that neither parent provokes the children. Fathers cannot stand idly by if their children are being provoked by their mothers.

What Does It Mean to Provoke?

The word used in Colossians 3:21 means to agitate, often to anger. Matthew Henry explains that parents provoke their children by treating them with rigor and severity, by holding the reigns too tightly and thereby raising their passions, discouraging them in their duty.

Years ago I was invited to participate in a long and strenuous horse ride. Due to fear and inexperience I held the reigns so tightly that the bit began to agitate the horse’s mouth. Before long the horse grew restless and threatened to throw me. I was provoking him to anger by holding the reigns too tightly. He was willing to be directed. But I was undermining his willingness by my heavy hand.

The word literally means to lose energy or passion. Discouraged children lose hope, stop trying, and give up. When children say, “I don’t care” or “It doesn’t matter,” they are often conveying discouragement. It is tempting to dismiss a dispirited child’s behavior as being teenager-ish or childish. But parents must resist assuming that their child’s indifference is normal. In fact, there are hosts of young people who are passionate about life and enthusiastic in godliness. But sometimes this passion is squelched by parental provocation.

Mishandling the Rod of Discipline

Surely the rod can be used too little: “He who spares his rod hates his child” (Prov. 13:24). Children need to be taught that sin hurts. If they don’t, they may lose interest in pursuing godliness because they don’t see the danger of sin.

But the rod can also be used too much. The Apocrypha says, “He who loves his son will whip him often . . . bow down his neck in his youth, and beat his sides while he is young” (Ecclus. 30:1, 12). This is not Christian discipline. Sometimes a wise rebuke is better than the rod (Prov. 17:10). This is particularly so as a child moves past the early years of childhood. Matthew Henry urges parents to exercise authority not “with rigor and severity, but with kindness and gentleness.” If your children can forget that you love them, either during or immediately following discipline, you might be doing it wrong.

God is a God of order (1 Cor. 14:33). He has created us in his image to promote order and thrive in the context of order. A disorderly home can discourage children. A perpetually messy or especially an unsanitary home can help produce poorly adjusted children. A lack of regularly scheduled meal times and bed times can frustrate children’s God-given desire for order.

Some parents expect almost nothing from their kids. In such settings, children can lose energy or passion because they are never helped to “reach forward to those things which are ahead” (Phil. 3:13). In other homes too much is expected.Experience teaches that unreasonable expectations are the ideal breeding ground for discouragement.If your children regularly fail to measure up to your standards, you might be expecting too much.

In some homes children are not treated with the dignity that God requires. Some parents rarely congratulate or encourage their children, focusing instead on their faults. Parents must never forget that their children are people created in God’s image. Children of believers are even included in God’s covenant (1 Cor. 7:14).

Failing to Speak as “One Flesh”

Too often, dad and mom are not operating by the same rules when it comes to interacting with their kids. One parent might be more lenient. The other might be more demanding. But such “accidental doublespeak” is dangerously confusing to our children. In irreconcilable disagreements the wife must graciously acquiesce to her husband’s leadership (Col. 3:18). 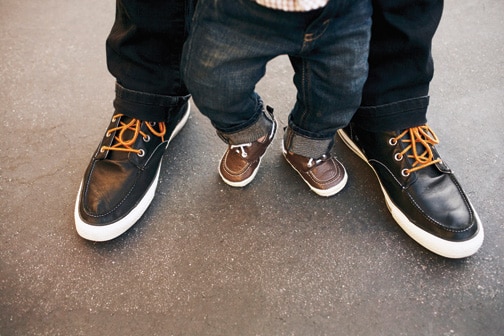 In some “Christian” families Christ is simply not central. Too often we emphasize our own righteousness or the righteousness we expect from our children. How is this ethic different from that in a non-Christian home? We sing, “My hope is built on nothing less than Jesus’ blood and righteousness.” Do we apply those words in our homes?

Christ-centered parenting also means explaining to our children how they can come to Christ. Too often we tell our children to respect us, to obey us, and to grow up. But we don’t help them bring their troubles to, and find healing in, Jesus. Christ said that his yoke is easy; his burden light. He will give rest for our weary souls (Matt. 11:29–30). We need to lead our children to rest in Christ. God forbid that we would make things more difficult for our children than Jesus would.

Make Grace Shine in Your Family

Is the most powerful principle in your home grace or law? The law merely tells us what God’s will is and that we must obey it. It is grace alone that teaches us how to please God.

William Hendriksen explains that “fathers should create an atmosphere which will make obedience an easy and natural matter, namely, the atmosphere of love and confidence.” Our emphasis should be on the positive.

Imagine that on the first day of a new job your trainer gave you only negative instructions. “Don’t ever be late to work, interrupt the boss during his meetings, use the phone for personal calls . . .” You would eventually wonder, “What AM I supposed to be doing? How do I do my job?” We often lead children to the same exasperation.

Gracious parenting especially applies to correction. Be sure that your children know that you love them as they are, not as you would like them to be. As a good rule of thumb, ask yourself, “What kind of correction is most helpful for me?”

Model Repentance Before Your Kids

Many children are rarely shown what it looks like to seek forgiveness from others for their sins. We tell them to do it, but we don’t show them how. We tell them to “apologize like you mean it.” But we don’t demonstrate what heartfelt sorrow for sin looks like. One way to model repentance is to seek our children’s forgiveness, especially if our provocation has driven them away.

Listen to the Advice of Others

Effective parents seek counsel from their pastors and elders, their own parents, and even their own kids. They also take advantage of good books on parenting. Two great helps on spiritual parenting are Shepherding a Child’s Heart by Tedd Tripp and Parenting by God’s Promises by Joel Beeke.

Our children are a sacred trust. Our task is not so much to rule over them as to lovingly, graciously train them to fear God. If you have ever worked with concrete you know that you have only a few hours to work it into the proper shape before it becomes immovable. So it is with children. We have just a few years to help shape the spiritual impulses that will guide them through the rest of their lives. We must do all we can to avoid misshaping our children by provoking them to discouragement.

This article previously appeared at http://www.ligonier.org/blog/5-dangers-avoid-parenting/ and is reprinted with permission.

Rev. William Boekestein is the pastor of Immanuel Fellowship Church in Kalamazoo, MI.