I met Mrs. L. in the early years of my ministry. She was a widow who had already passed the fourscore mark. In her modest home she was caring for her two developmentally challenged children. The son, Piet, was terminally ill with cancer, the daughter, Johanna, was severely crippled with arthritis. Mrs L.’s formal education consisted of a few years of grade school training in the Netherlands. Her knowledge of the Scriptures and Reformed theology, however, was profound.

I often called at this home on Monday. Many times we discussed the sermons of the previous Lord’s Day and many times I entertained the wish that I had preached them to Mrs. L. on Saturday so that I could have incorporated her observations, especially her insights from the Old Testament, into the sermons so that the entire congregation could have benefitted from them.

Her godly influence was reflected in the childlike faith of her son and daughter. Piet’s understanding was severely limited. However as we visited he would often say, “dominee, danke” thereby expressing his desire for prayer. Johanna knew severe pain because of her arthritic condition. After our devotions, in which we always included a petition for the lessening of pain, she would declare, “The pain is getting better already.” In their minds there was no doubt about the fact that God hears and answers prayer. 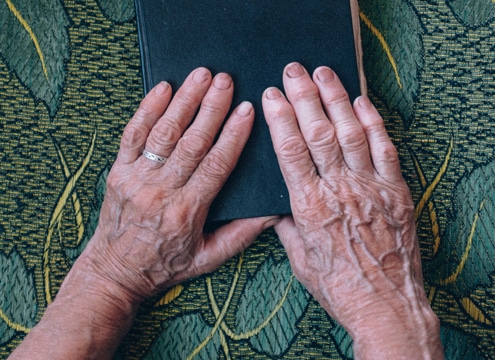 Sometimes I would express my concern for Mrs. L. because of the heavy responsibilities which were hers at her advanced age. Each time she responded by quoting in her native language, “For by you I can run against a troop, by my God I can leap over a wall.” Psalm 18:29.

Upon my departure from that home Mrs. L. would often say to me, the young pastor,” Vergeet niet dominee. ‘Tegenspoed is beter dan voorspoed’” (“Don’t forget, pastor, ‘Adversity is better than prosper ity’”). When her words resound in my ears after these forty or more years, I am reminded that she had learned the lesson of Job 23:10 “When he has tested me, I shall come forth as gold.” I am still learning that lesson.

Rev. Art Besteman is a emeritus minister who lives in Caledonia, Michigan. He is a member of the Bethany United Reformed Church of Wyoming , Michigan.