I saw him out of the corner of my eye. It was late. I had just stopped in at the church to pick something up and there he was. It wasn’t the first time I saw him at the church, I just never expected him to be there that late.

“Just fixing the drinking fountain,” he said. “Somebody told me it was leaking a little.” The last time I saw him it was early in the morning. Then he was cleaning the carpets.

That’s just the way Neil is. He’s a handy handyman who can fix just about anything. I take that back he can fix everything. I have never brought anything to Neil that he was not able to fix, usually better than the original parts that I had brought to him. He loves the challenge.

He also loves the church. Neil has served as a deacon and as an elder. He has worked on everything from the Building Committee to the Music Committee. But most of all Neil loves to be in the church doing what he knows how to do-fix things. 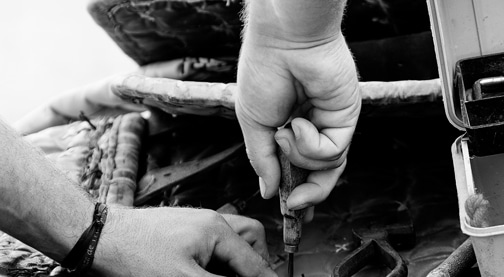 I thanked Neil for what he was doing and headed home. He was still there when I left.

As I drove home, I couldn’t help but think about how much the church needs people like Neil. People who are willing to use the talents and gifts that God has given them for His kingdom.

People like Neil are often the unsung heroes of the church. Year in and year out they are there contributing to the church not only financially, but they give something much more important – their time.Through all the challenges and changes that the church will go through, these people are there giv-ing of their time to the church. The church will go through new ministers, new elders, and new deacons, but people like Neil will always there to help in any way that they can.

Most of the people in the church have no idea how much Neil does for the church. I’m sure that’s the way it is with most of these unsung heroes. Those who do know probably take it for granted. “Well, that’s what Neil does,” would be their attitude. Maybe that’s because their presence in the church and their years of service seem to be as much a part of the church as the cornerstone and the steeple.

If you were to thank them, they probably would be embarrassed. They don’t want to be recognized anyway. That’s because they do not do their jobs to be complimented. The mere doing them is thanks enough. More to the point, if they can be humble servants of Christ, that is all they ask.

The Psalmist wrote, “I would rather be a doorkeeper in the house of my God than to dwell in the tents of the wicked.” People like Neil really understand that verse and live it. And I would rather have one “Neil” in my church than a dozen Pastor’s Assistants.

Rev. Wybren Oord is the pastor of the Covenant United Reformed Church in Kalamazoo, Michigan.