John came to America to seek a better way of life for his family. His wife and five children remained in the Netherlands while John worked to make arrangements for their coming to the United States. John had worked as a skilled craftsman in Holland but the language barrier forced him to accept employment as a menial laborer with minimum wages here in the States. At the end of a year while John had worked to provide support for his family back home and to meet his own meager needs he found himself still short fifty dollars of the needed funds to transport his family to their new land. 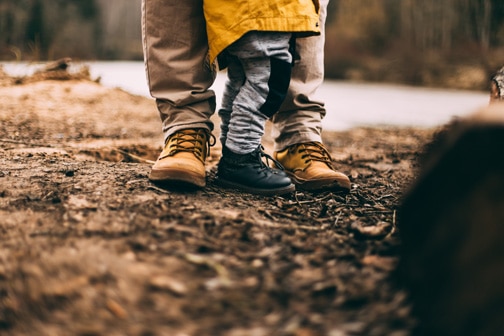 Desperately lonely for his family he decided one night to approach the deacons of the church he had been attending to find out if they could provide some assistance so that he could be reunited with his family. The deacons listened attentively to his story and then informed him that since they were not a “leenbank” (loan office) they could not help him. John was completely downhearted as he left the meeting with the deacons. He stopped in front of a furniture store located along the main street of the Dutch community in which he was living and prayed, “Lord, I cannot go on like this, please help me.”

John remembered that a friend was boarding with a family on one of the courts that ran off the main street along which he was walking. He decided to visit his friend. He turned unto the narrow street of modest houses and stopped at what he thought was his friend’s residence.

An elderly lady responded to his knock. He realized he was at the wrong house. The lady at the door recognized by John’s speech that he was from the same province in Holland from which she and her husband came. She invited John to come in. John was deeply distressed and soon found himself unburdening his heart to these kind folk who were showing him hospitality. At the close of the visit they invited John to meet them at an appointed time at the local bank because they wanted to help him.

John met the elderly couple at the neighborhood bank. The vice-president of the bank who was well acquainted with the affairs of nearly everyone in the Dutch community came out from behind his desk and told John that the man who was befriending him was a street sweeper whose income was severely limited and that he and his wife were withdrawing their life’s savings to assist him. John informed the banker that every cent would be repaid as indeed it was in due time.

John sent for his family. However John had learned in the course of the contacts with his benefactors that they had no church home. John said to them, “You have done something for me, now I want to do something for you.” and he went on to invite them to go to church with him. They agreed and the following Sunday the three of them made their way on foot to the church which John had been attending. The Spirit of God worked and the Word was applied and in due time the elderly couple expressed their desire to confess their faith in Jesus Christ. This they did publicly in one of the neighborhood churches.

Each time that John told me this story—and I listened to it more than once—the tears flowed down his cheeks and I was reminded anew that our God is indeed sovereign and “all things come not by chance but by His fatherly hand.”

Neil came to America as a young boy. He had been born into a Christian home, was reared in a Christian Church and had attended Christian Schools both in the Netherlands and in the States. As a teenager in America he made some bad friends and it wasn’t long before he was living an immoral life. He became an alcoholic and forgot completely the training he had received from Christian parents. In time the church of which he was a member by baptism exercised discipline and erased his name from the membership rolls. Neil became bitter and vowed that he would never again enter a church. He declared that the church was made up of hypocrites. Some time later Neil married a woman who had been reared in the Roman Catholic Church.

Neil had an older brother, John. John and his wife had an only child, a son. This son was killed in a traffic accident when he was only thirteen. On the morning of the day of the funeral of Neil’s nephew, Neil and his wife had a heated argument. Neil’s wife said that he should attend the funeral of his nephew. Neil reminded her that he had vowed that he would never again enter a church. Neil’s wife retorted that that didn’t matter, the funeral was for his nephew and he should go. Neil replied by asking why he should go when she had no plans to attend. Neil’s wife replied that she had never been in a Protestant Church and didn’t intend to enter one now. After a long morning of bickering they reached a compromise. Each would go if the other one did. And so Neil and his wife attended the funeral service.

The pastor who presided at the funeral of the teenager who had been killed chose as his text that day the opening words of Psalm 46, “God is our refuge and our strength, a very present help in time of trouble.” The Gospel is God’s power unto salvation. The Word proclaimed at that funeral was used by God to bring Neil and his wife under conviction of sin and to faith in Jesus Christ. In the presence of death two sinners came to know the gift of life in Jesus Christ and to know it more abundantly.

How important it is for every pastor to proclaim the Gospel faithfully, also at funeral services lest the blood of lost sinners be on their hands.

Rev. Arthur Besteman is an emeritus pastor in the United Reformed Churches in North America. He is a member of the Bethany URC in Wyoming, Michigan.