Lubert was a retired farmer. Every time I would drop in, he and his wife would be listening to Christian music. Next to Lubert’s favorite chair there was always a large stack of religious magazines because Lubert loved to read. I enjoyed my visits with Lubert and his wife because each visit left me spiritually enriched.

Lubert was in his late seventies when the doctors told him he was going blind. We began enlarging the church bulletin for him. I would also enlarge the songs because Lubert loved to sing.

We did this for about two years and then one day Lubert told me I could stop printing the large bulletins. He could only see shadows and couldn’t read anymore. I felt bad about that because I knew how much he loved to sing. He would miss it and I would miss his enthusiastic singing on Sundays. 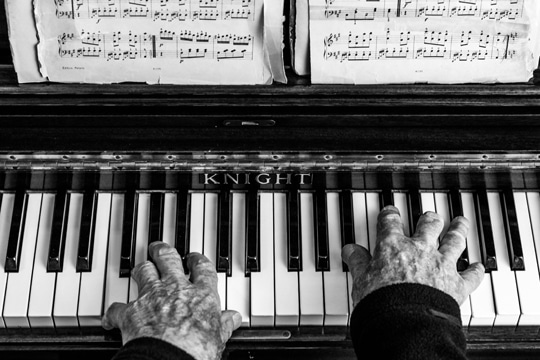 When I visited with Lubert and his wife that week, I commented on his singing and how thankful I was that I had picked songs he knew. He smiled and began talking about something else. The next Sunday, the same thing happened: holding the book for his wife and never looking down, he sang every verse with joy. The next Sunday was the same.

The next month when I visited with him, he told me his secret. “You know, dominie,” he said, “I love to sing. I grew up with these songs. I’ve sung them all my life. When the doctor told me I was going blind I knew I needed to do something if I wanted to keep on singing. So every day and every night I would go through the hymnal, song by song, until I had it memorized.”

Lubert is in heaven now, singing with the saints in glory. His body has been perfected, his vision restored. But even with 20/20 vision, he doesn’t need a song book because he sings every song from the heart; a heart that has been cleansed by the blood of Jesus Christ.