Henry and Lena were married for fifty years already by the time we moved into their neighborhood. I remember one summer afternoon I heard voices coming from their yard. I walked over to their house and discovered them sitting on lawn chairs in their driveway. I also remember coming home and telling my wife how surprised I was by that sight. “They’ve been married for fifty-some years,” I said. “What could they possibly have left to talk about?” 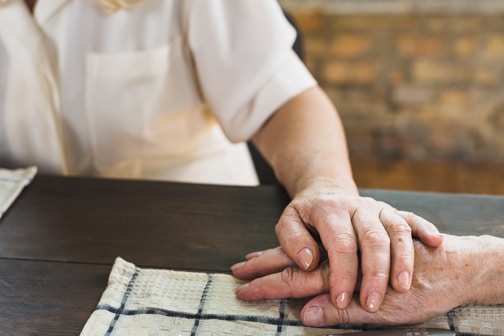 I would soon find out that they talked about everything together. And what a pleasure it was for me to be able to often share in their conversations.

It didn’t take long for me to realize the wonderful love they had for each other. I recall one day Henry came to our house very upset. I asked him what was bothering him. He replied,

“I lost my wedding ring somewhere between our two houses. Could you help me look for it?” He continued to make excuses for losing it. After all, he reminded me, the band was over fifty years old. “A lot thinner than it used to be.” While he was talking about it, I began to realize how precious what the ring symbolized was to him.

We never found the ring. He joked about how that freed Lena of her responsibility to him, but I knew it hurt him not to be able to find it. Every now and again I would see him walking around the area where he said he lost it. And, I have to admit, I was there a time or two, as well.

Years passed and every warm afternoon or early evening, Henry and Lena would get their lawn chairs out of the garage, put them on the driveway, and sit and talk with one another.

When we moved to another church I would talk about Henry and Lena in my pre-marital counseling class. I began to use them as an example of how couples need to communicate with one another. “Nothing fancy,” I would tell them, “you just need to take the time to talk with one another.”

One of the biggest problems in marriages today is that we fail to do what Henry and Lena did. Couples are so busy with their lives, so glued to the television set, and so involved in activities outside the home that they no longer know how to just sit on lawnchairs in the driveway and talk to each other. And then, when they get older and the children are out of the house, they don’t know what to say to each other. A couple of years ago we got a phone call that Lena had passed away. Shortly after that, we got another call that Henry had become so ill he was unable to go to her funeral. We drove out to Iowa to visit with our dear friend. By the time we arrived, the Lord had taken him home, as well. Jesus says in John 14, “In my Father’s house are many mansions…” I can almost picture the mansion God has prepared for Henry and Lena. Only they are not in it. They are out on the driveway just talking with one another and gazing at Him who is Light.