The war of independence was still going on in the Lowlands. It would last from 1568–1648. During that time the Reformed faith had taken root in the Lowlands and became the dominant religion. It was during that time, on March 3, 1589, that a baby boy was born in the family of a Dutch Reformed minister in the town of Heusden. His parents gave him a true Dutch name: Gijs Voet. In later years, this little boy became an ardent defender of the Reformed faith under his Latinized name, Gisbertus Voetius. 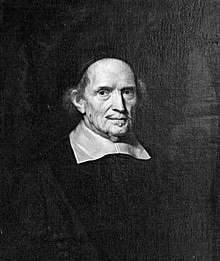 Voetius received his formal higher education at the University of Lyden under Arminius, Trelcatius, and Gomarus, by whom he was deeply influenced. He was an outstanding student with an excellent memory, advancing quickly in his studies. While still studying, Voetius was appointed as a lecturer in Logic and showed already then that he was a strict and uncompromising defender of Calvinism.

Upon graduation in 1611, Voetius became a minister in Vlijmen, where he served for about six years. Then he returned to his birthplace, Heusden, where he served the church for about seventeen years. Voetius was very faithful in his ministerial work and was loved by his congregations. He was deeply interested in evangelism and missions. In Vlijmen he was instrumental in bringing a large number of Roman Catholics to the Reformed faith; in Heusden, he was influential in persuading the large trading companies to send missionaries to different parts of the world using their Dutch ships.

Voetius also studied Aramaic so that he could better understand the Semitic languages. In 1634 he was appointed professor of theology and oriental languages at the Academy in Utrecht. While teaching there, Voetius also served as pastor of a local church in Utrecht. When the Academy became a university in 1636, Voetius gave the inaugural address on Luke 2:46, “And it came to pass, that after three days they found Him in the temple, sitting in the midst of the doctors, both hearing them, and asking them questions.”

Under his unswerving leadership, the Utrecht faculty of Theology took over the lead from Leyden as the heartland of unyielding Calvinism. Voetius saw Arminianism for what is was: a wholesale attack on the very heart of the Reformed faith and a return to Roman Catholicism’s view of salvation by works. Voetius was elected as a delegate to the Synod of Correct (1618–1619) and made major contributions in the debate which led to the defeat of Arminianism. Voetius was also instrumental in the discussion that led up to the printing of the Canons of Dort.

Firmly convinced that when the Reformed faith is embraced whole-heartedly it leads to Christian piety, Voetius reflected his theology not only in the classroom but also in his life. He is often referred to as “the standard-bearer of the Nadere Reformation.” Voetius wrote a manual for his students that gave them practical advice for daily walking in the spiritual life, covering such topics as prayer, meditation, the sacraments, and listening to God’s Word.

Not only did Voetius defend the Reformed faith against Arminianism, but he also took up arms against other heresies. When French philosopher and scientist Rene Descartes promoted his view that the Christian faith could be supported by reason alone and that there was no need for faith to bolster its tenets, it was Voetius who attacked the philosopher’s views, speaking boldly against a simple rationalism. Voetius also disagreed with the separatist views of Jean de Labadie. His greatest battle, however, was against Johannes Cocceius, a German by birth who studied at Franeker, Holland where he was appointed theological professor in 1643. He later began teaching in Leyden in 1650. Cocceius developed what later became known as Biblical Theology in which he made a sharp distinction between the Old and New Testaments that led to the denial of the validity of the New Testament Sabbath.

Voetius had three sons. Two of them became professors, one a minister. One of his grandsons also became a professor. Voetius died on November 1, 1676. To read more about Gisbertus Voetius: The Unknown Voetius by J. Van Oort, editor; Gisbertus Voetius by A. C. Duker; and Reformed Dogmatics, edited and translated by John W. Beardslee III.

Mr. Nicholaas Van Dam is a member of the United Reformed Church in Escondido, California.