This Easter meditation was written by the late editor John Vander Ploeg, (formerly editor of The Banner) in March, 1975.

A blessed Easter to you!

But let’s be clear about one thing.

That wish can come true only on this condition: that by faith we think the right thoughts.

Fragrant flowers, a new outfit, and delicious food can serve a good purpose only if they are outward symbols of believing thoughts in our minds and in our hearts. Without that, all these are only so much folderol or a plain farce. 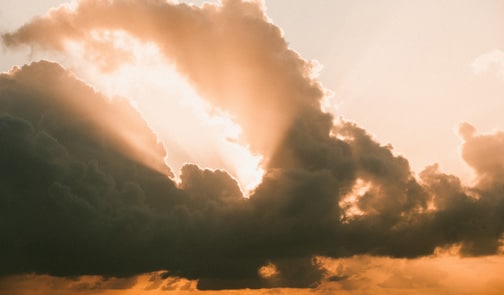 Following are four such thoughts.

1. First, think of what Easter means for the earth. “And behold,” Matthew tells us, “there was a great earthquake…”

Surely, it is not unwarranted to find special significance also in this that the earth quaked at the resurrection of our Lord. We believe that this is so because this earthquake came just at that particular time. Everything that happened at that time must have had meaning. Bear in mind that there was an earthquake at Calvary also.

The significance of Christ’s resurrection for the cosmos or the creation is truly precious. It seals the glorious fact that our Savior by His redeeming work also delivered the universe as God’s creation from the blight of the curse of sin.

Once upon a time the heavens and the earth were perfect. God had made them altogether good, able to serve the purpose for which He had brought them forth: to glorify Him. What a beautiful and wonderful earth that must have been when Adam and Eve were in Paradise!

But we know that all this is different now. God spoke of that to Adam immediately after the Fall: “Cursed is the ground for thy sake…” Romans 8:22 tells us: “For we know that the whole creation groaneth and travaileth in pain together until now.”

But a better day is coming because of our Lord’s redeeming work. This universe is going to be renewed. We are to have new heavens and a new earth. Creation will one day be restored to its original beauty and perfection. When God sent an angel and raised our Savior from the dead He showed thereby that Christ’s atoning work was sufficient. Sufficient not only to redeem us from our sin and from death and hell, but sufficient also to take away the curse that was resting on the cosmos. So, we now “look for new heavens and a new earth, wherein dwelleth righteousness” (II Peter 3:13).

2. Second, think of what Easter means for our Savior.

When this angel of the Lord came on Easter morning, he came with a message for Christ also. Matthew tells us that “an angel of the Lord descended from heaven, and came and rolled away the stone and sat upon it.”

It may seem strange that an angel should be sent from heaven to roll this stone away for the Lord to come forth. After all, Jesus is not only man but also the very Son of God. Did He need an angel to do this for Him? Celsus, a critic of Christianity in the second century, is said to have scoffed at this.

But Celsus was wrong. Surely, God had a purpose in sending an angel to do this. It seems to me that this act was symbolic. This was God’s way of showing that He had accepted the payment Christ had made for our sin. Accordingly, Scripture tells us not only that our Savior arose but also that God raised Him from the dead.

On the cross Jesus had reported to the Father concerning His mission: “It is finished.” The angel sent to roll away the stone may very well have been the Father’s response to show thereby that He was fully satisfied and that our Savior was therefore to come forth out of the state of humiliation into the state of exaltation.

This rolling away of the stone would then be God’s seal of approval to show that our Savior’s redeeming work was altogether acceptable to God and that we who look to Him do not trust Him in vain.

3. Third, think of what Easter means for a godless world.

As long as men remain in their unbelief, let them beware! For them the resurrection of Christ comes with a terrifying message.

Note again what Matthew tells us: “His appearance [the angel’s] was as lightning, and his raiment white as snow: and for fear of him the watchers did quake, and became as dead men.”

Think of what a frightening experience this must have been for these coarse, brutal Roman soldiers. For the first time in their lives they were in the presence of a holy being who had just come from heaven where all is pure and holy. Otherwise afraid of nothing these men now began to tremble and they became paralyzed with fear.

And these enemies of our Lord had reasons to be afraid. The angel made that clear also when he said to the women: “Fear not ye.” By implication the angel said that these unbelieving soldiers indeed did have good reasons to be terrified.

There is such a close connection between our Lord’s resurrection, as the first step in His state of exaltation, and the judgment on His enemies.

Jesus is now no longer the Man of Sorrows, but He is risen to reign as King of kings and Lord of lords, and able also to judge the wicked. Let the unbeliever, therefore, cast himself upon the mercy of the living Savior and thus flee from the still greater wrath to come.

4. Finally, think of what Easter means for the Christian.

Here is a glorious gospel for all who believe in Christ and love Him as these women did: Fear not yet Matthew tells us: “And the angel answered and said unto the women, Fear not ye: for I know that ye seek Jesus, who hath been crucified. He is not here; for he is risen…”

We are told by men that “there is nothing to fear except fear itself.” What fools we are to be duped by such false assurance. Without Christ as the crucified and risen Savior, man has everything to fear: sin, death, the grave, and eternal punishment in hell! But now, hand in hand with the living Savior, we can be fearless and also face death and eternity as more than conquerors in Him.

A blessed Easter to you as you address your minds and hearts to these thoughts in faith.