“The supreme need of the Moslem world is Jesus Christ. He alone can give light to Morocco, unity to Persia, life to Arabia, re-birth to Egypt.” Samuel Zwemer [1867–1952]

Since the horrific September 11 slamming of two planes into the World Trade Center and a third plane into the Pentagon, and the war against terrorism in Afghanistan, many Americans and Canadians are debating the nature of Islam. For example, Aaron Hughes, professor of religious studies at the University of Calgary, says the number of students taking his class, Introduction to Islam, is “way, way up” since Sept. 11.

Secular journalists are also showing great interest in Islam and religion as such. But what most of the journalists describe is not the Islam that is practised by the average Muslim. They seek to understand Islam from their Western-postmodern perspective, defining it in terms of formal, institutionalized religion with its sacred text the Koran, commentaries, and organized mosques. 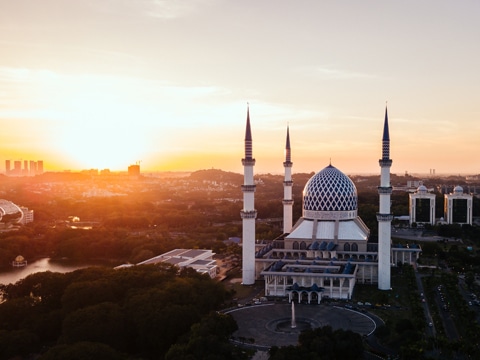 Scripture mandates that we bring them to the Gospel of Jesus Christ. But if we are to reach the Muslim world with the Gospel, the pioneer of Reformed missions to Muslims, Dr. Samuel Zwemer, noted that we must first know of it and know it. To understand Islam we must begin by making distinctions of various kinds of Islam. There are fundamentalist Muslims as well as mystics and secularists. The 1.2 billion Muslims in the world are divided along three major groups: Sunni, Shi’ite, and Sufi, each with their own branches and subdivisions. But while their leaders might be wholly committed to Islam, the ordinary Muslims are impacted by folk Islam, a mixture of formal Islam and local animistic practices and beliefs.

These beliefs contradict many formal aspects of the Islamic faith. They are, however, common and permeate the every day life of Muslims from Morocco to Malaysia. In fact, in Arabia, Pakistan, and Indonesia most Muslims are folk Muslims. In other words, when Islam became the major religion in these regions, animistic beliefs and practices did not disappear, nor were they stamped out. This folk Islam worldview built upon and integrated with the everyday stresses and joys of ordinary people must be addressed in reaching Muslims with the Gospel. In his carefully documented book The Unseen Face of Islam. Sharing the Gospel with Ordinary Muslims, Bill Musk notes that the commitment to folk Islam by many Muslims has remained mostly hidden from or ignored as irrelevant by Western missionaries. Not only must formal Islam be studied but Folk Islam as well. These two expressions of Islam, tend to live easily with one another. In fact, Musk says, that “both views may well operate in veiled partnership within any one single Muslim.” Muslims may attend mosques, but they also go to the shaman or the witchdoctor.

In his book, The Influence of Animism on Islam, Zwemer shows how Islam sprang up in pagan soil and retained many old Arabian beliefs in spite of its vigorous monotheism. Wherever Islam went, it introduced old and new superstitions. Superstitions and animistic beliefs still bind mind and heart with constant fear of demons, with witchcraft and sorcery and the call to creature worship.

Zwemer believed that the rapid spread of Islam in Africa and Malaya was largely due to its animistic character. His accounts reveal that many Muslims live in a world densely populated by an array of good and evil and earthly spirits which influence human affairs. For example, in the Philippines, ceremonies connected with rice planting and harvesting, birth and death, are part of the living routine for Filipino Muslims. Much of the pre-Islamic, Malaysian belief systems and customary laws (adat), which are indigenous to the people of Mindanao and Sulu, were simply carried into Islam.

Filipino Muslims conceive the world as alive with spirits and make offerings to these spirits, the same way as pagans do. They believe that these spirits relate not only to the physical and mental well being of a person, but also to the success and failure in agriculture and business. For these Muslims their religious practices are nothing less than Islam. They believe that they are faithful and true to the basic teachings of the Koran. There have been instances when foreign-fundamentalist Islamic teachers have tried to point out that many of their local religious practices were un-Islamic, but in each case the local religious leaders repudiated these charges by saying that they (the foreigners) didn’t have a correct understanding of Islam.

The practice of animism extends to the use of the Koran. Various surahs (chapters) and verses are reputed to be powerful for such problems as headaches, fevers, blindness, and toothaches. For example, Surah 113 is believed to be a deterrent to all sorts of disease. Surah 114 has the power to counter psychic afflictions, and Surah 13 is a sure cure for headaches. And throughout the Islamic world, the Koran is used as a charm in itself. Miniature copies of the Koran are pinned on to children’s clothing as talismans. In Egypt a common saying is that Satan does not enter the house in which the Koran is recited every day. The act of recital keeps evil at bay.

Musk notes that such unorthodox views of the Koran are exaggerated among Muslim populations for whom Arabic is a foreign tongue. He observes that although the reading of the Arabic Koran may be encouraged as an act of piety, its obscurity in non-Arabic societies helps promote an alternative view in its effects, where it is seen as power and efficacious in a magical sense.

The Saints of Folk Islam

In Folk Islam saints fulfill an important role. A major distinction is between the dead and the living saints. Whitewashed, domed shrines dot the landscape of much or rural Africa and the Middle East. Both the corpses of saints and their shrines – even the ground, water, or foliage surrounding their graves are endowed with large deposits of baraka. Folk Muslims believe it is a magical power that can be created by ritual and manipulated for human benefit.

Anwarul Karim says, “It is the saint who can avert calamity, cure disease, procure children for the childless, bless the efforts of the hunter and even improve the circumstances of the dead.” In return, devotees express their gratitude and dependence in the form of vows, visits to shrines, and celebration of saints’ days.

Living saints (pirs) are Muslims who have progressed beyond the confines of legalism. The pir is expected to have almost magical powers. Muslims believe that living saints are capable of performing miracles. They are expected to render certain services to believers. Bab Farid, a Pakistani saint, is said to have cured incurable diseases, raised a dying man to life, converted dried dates into gold nuggets, and covered vast distances in a moment.

For Muslims, the birth of the prophet Muhammad is one of the most important events in history. Veneration of the prophet Muhammad, including his relics, are part of the religious devotion for multitudes of Muslims. In Qandahar, Afghanistan, the cloak belonging to Muhammad is treasured. The Topkapi Palace in Instanbul, Turkey displays an encased hair from the Prophet’s beard. In Cairo, Egypt, the Qaitbey Mausoleum houses a stone block bearing the footprints of the prophet. His footprints marked in the Dome of the Rock at Jerusalem are world famous. And his tomb in Medina is perhaps one of the greatest objects of veneration associated with Muslims devotion today.

Although the Koran stresses the humanness of Muhammad, in reality he became deified. The prophet’s biographer, Muhammad Ibn Ishaq, a Muslim historian who died about AD 768, passed on stories of miracles, such as those in which Muhammad melted a rock with a drop of water, or produced water from a dried waterhole with an arrow.

Addressing Muhammad with blessing and prayers constitutes an important feature in daily religious life of most Muslims. Musk observes that orthodox Islam, although unwilling at times, has usually yielded to the imagination and needs of the ordinary Muslim’s heart concerning an object of devotion, a mediator with God, and a powerful answerer of prayer. The key place of Muhammad in Islam and his veneration by millions demonstrate that he is believed to be more than a prophet. They ignore and distort the basic facts of Christ’s life and purpose of His coming into this world.

In practice, Muhammad has supplanted Christ in the mentality of the Muslim community. Islam, therefore, poses for Christianity a greater problem than any other religion or belief system. As Zwemer states: The sin and guilt of the Muhammad world is that they give Christ’s glory to another, and that for all practical purposes Muhammad himself is the Moslem Christ. Jesus Christ is supplanted by Muhammad not only in Moslem world tradition and in the hearts of the common people who are ignorant and illiterate. He is supplanted in the hearts of all Moslems by Muhammad. They are jealous for his glory and resist any attempt to magnify the glory of Jesus Christ at the expense of Muhammad.

The folk-Islamic view of the world presents a great challenge for Christian mission outreach ministries. The world of popular Islam demonstrates the reality of the kingdom of darkness. Its demonic nature must be exposed and dealt with. Christianity is the final religion and not Islam. The message of Christ incarnate, crucified, risen and glorified has not changed and must be proclaimed for the evangelization of the Muslim world. The task of the Christian church then is not only to show folk Muslims that their religion is without hope. They must be brought to the point that they realize that their spiritual need can be met only in Jesus Christ, rather than in false teachings and practices.

The Author of this article writes under the alias of “Dick Wunnink” due to past threats received from the Islam community when writing about this subject.