In order to fully understand how Luther presents and defends his arguments, one must first understand a little about Luther himself. Martin Luther was born in Saxony, Germany in 1483. He is described as an intelligent, studious boy with an overall cheery disposition. He continued his education at the University of Erfurt, enrolling in 1501. He was known there for his abilities in philosophical studies and debate.1

There were times in the life of Luther when he would go through deep despair. These times became more frequent at college. There he became convicted of his sins and was discouraged over the state of his soul and his relationship with God. This despair and discouragement led Luther to go against the wishes of his father in pursuing a career in law in order to join a monastery to save his soul. He was accepted to the monastery of the Erfurt Augustinians in 1505.

Although he thought this would help, it only served to deepen his despair. His theological studies only convinced Luther that he was right in being so discouraged, for the writings of the day, mainly those of Thomas Aquinas and Occam, taught a salvation by works. Luther knew that there was no way he could earn his salvation, no matter how hard he tried to do good works. He knew that “he deserved condemnation and hell” for the things he had done and would do.

The Vicar-General of the Order in Germany, Johann von Staupitz, gave Luther some very wise advice on Matthew 4:17: “Repent for the kingdom of heaven is at hand.” He told Luther that the repentance of which Christ spoke was a true repentance of the heart and not repentance of prescribed acts of penance. Von Staupitz also encouraged Luther to continue studying for his doctorate.

Graduating with his doctorate in 1512, Luther followed von Staupitz’s advice and succeeded von Staupitz as the chair of theology at the University of Wittenberg three weeks later. During a series of lectures on the Psalms, “the light broke through the mists of doubt and despair caused by scholastic theology, ignorance, and personal soul-anguish”.2

As well as being the chair of theology, Luther was also a minister at the Castle Church at Wittenberg. During this time the practice of selling indulgences began to permeate the church. In 1516, and Luther was began to preach publicly against the sale of indulgences. Luther began to study indulgences and what they meant to the church. He wrote his beliefs down, and on October 31, 1517, posted his Ninety-Five Theses on the door of the Castle Church.

In 1519, Luther debated with Eck about the primacy of the pope. Eck had better debating skills and drove Luther to a point where he admitted to agreeing with John Hus and others whom the church had declared to be heretics. The only way Luther knew how to respond was with Scripture. Luther was put on trial, and on June 15, 1520, he was condemned for heresy.

Now that we know a little bit about Luther and his life, it will be easier to understand how and why he presented his arguments the way he did. Two questions that Luther’s sermon, Two Kinds of Righteousness, answer came from the list of seven basic worldview questions in Sire’s Universe Next Door. These questions are how we know the difference between what is right and wrong and what we are as human beings. 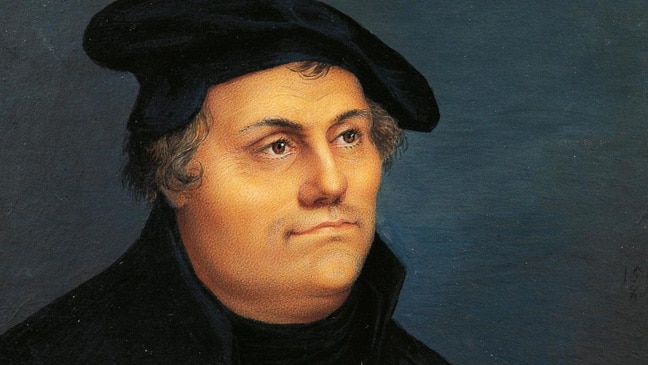 Luther classified people into two different categories. “Men can be classified as public or private individuals.”3 Public individuals are those who have been placed in an office of authority. They are required to judge and punish evil men, vindicate and defend the oppressed, be servants of God, and act for the sake of others and not for themselves.

Private individuals are split into three categories. Luther does not give these different types of private individuals names, but he does describe the way they behave or act. The first type are those who seek vengeance and judgments from the representatives of God, the public individuals. The second type are those who do not desire vengeance, nor do they resist when evil attacks. They are the ones the Bible call the sons of God, the brothers of Christ, and heirs of future blessing. These are the type who do not avenge themselves. The third type are those who agree with the second type in theory but not in practice. They seek vengeance not for themselves, but for the betterment of the offender. They are the ones the Bible calls “zealots”. Luther tells us that no one should ever seek to become this type of individual. He says the only way to become this type of private individual is through maturity and experience.

This discussion leads us to ask the next question. How do humans know the difference between right and wrong? Luther does not address this question explicitly in his sermon, but we can definitely find the answer there. The two kinds of righteousness that Luther discusses are alien righteousness and proper righteousness.

5:13: “Through love be servants of one another.” “When each person has forgotten himself and empties himself of God’s gifts, he should conduct himself as if his neighbor’s weakness, sin, and foolishness were his very own.”7

When Luther debated with Eck, he kept falling back on Scripture to defend his positions. It is no different with this sermon. Luther continually fell back on Scripture as his basis for truth. In this sermon, he used over fifty Scripture references. He used Scripture from the Old and New Testaments to verify his claims.

Luther’s answers are applicable to us today, because we still need to hear that salvation is not by works but by the grace of God through Christ. Even if we do not agree with him, Luther’s thoughts and views changed the course of church history. Though Luther did not mean for them to be used in such a manner, his Ninety-Five Theses were taken up at the beginning of the Reformation. Luther intended the theses only for debate over the topic of indulgences, a subject very pertinent to the church at that time. Some of the students from the University of Wittenberg translated the Ninety-Five Theses and distributed them to the people. Within a few months, the Theses had spread across Europe, and people were using them as a cry for Reformation. Without Luther, the church would be a very different institution from the one that it is today.

Miss Susan Allgaier is a Junior at Grove City College in Grove City, PA. She is a member of the Covenant OPC in that city.