In the September 29, 1955, issue of The Christian Century a challenging article appeared under the title of ‘“The Church’s Suburban Captivity.” In it the writer attempted to point up what he considered one of the greatest perils of American ecclesiastical life. Since World War II the trek from the larger cities with their overcrowded streets and outmoded houses to the suburbs with grassy plots and gardens has been growing apace. Millions have been spent in erecting church buildings in outlying areas.

All this, the author notes, has left the churches in the city in the back-wash. The flight to the suburbs has almost taken on the appearance of panic. In these days of rising prosperity people don’t want to be caught in the old neighborhoods. And the net result has often been that others less prosperous have moved in, whom the churches in their weakened condition and their fear of getting the “wrong people” into the Lord’s house have failed to reach. The whole temper of our Spiritual life has been affected. Clergy and leadership are largely recruited from people with the suburb-mentality, which the writer considers a “threat to the church’s witness to Christ’s lordship.” The concept of success has been introduced into the church with its emphasis on “pushing competition,” “distributive rewards,” and “individualistic thinking.” In spite of its hyperactivity, the church with the suburb-mentality has been too successful in insulating itself from the masses.

This points up a problem which we also have with us, be it in a somewhat different form.

As Reformed Christians we confess vigorously that the Lord Jesus Christ and not man (whether preacher or parishioner) gathers the church in the unity of the true faith. In principle we react strongly against any attempt to make the church “class-conscious.” Traditionally we even insist that people should attend that church of our faith which is located nearest their homes. 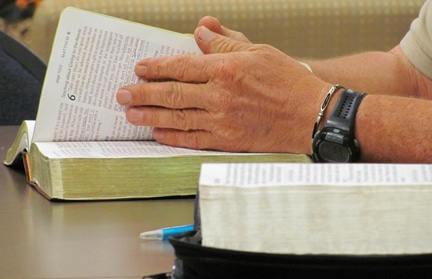 Much of this profession, I fear, has been with tongue in cheek. Practice has often given the lie to our principle. At times, indeed, it is advantageous and even necessary for people to retain membership in a church farther removed from them. The language used at worship, the mobility or people who live in rented apartments or rented farms, strong family ties in a church which stresses the covenant idea, and dwindling membership in certain congregations may justify some of this.

But a problem has arisen which needs to be pointed up. During the past two decades there seems to be a growing awareness of “class” within the Christian Reformed Churches. And though the subject is a delicate one and lays all who mention it open to sneering or scathing denunciation, it demands discussion not only but strong resistance. It can hardly be denied that many of our people moving into a new area chose their church-home without thought to principle. Instead of asking where they are most needed, they select their church-home on the basis of where they feel they “will fit in best.” Thus in our larger centers we find certain congregations made up almost exclusively of day-laborers; others of farmers; others of business men; others of professional people. The parlance of the people betrays the rise of this trend unmistakeably. We hear them talking about “rich” churches, “snooty” churches, “common man’s” churches, “sound” churches, and “rather liberal” churches. Although many of these remarks are unjustified and most of them are unkind, they sound an alarm which we do well to heed.

In the Christian Reformed Church we have always taken a measure of justifiable pride in the reality and vigor of our denominational unity. We are one in our common faith in Christ. We are one in the preaching heard in our pulpits from coast to coast. We are one in seeking to realize common goals in education, philanthropy and missions. But if this unity is not to be undermined or destroyed, every congregation ought as much as possible represent a cross-section of our Reformed believer’s. What more impressive sight can there be than a congregation assembled around the Word and sacraments comprising rich and poor, educated and uneducated, farmers, business mell and day-laborers, teachers and doctors and lawyers, yes even black and white and red and yellow! The gospel of our Lord Jesus Christ is the great leveler of men. In the sight of God the souls of all his saints are precious. The church of the Savior must do more in our days of social climbing and growing class-consciousness, stimulated by rising nationalisms throughout the world and increased luxury at home, than preach the principles of spiritual unity in Christ. We need desperately consistent personal practice.

This requires a large measure of self-denial. All of us like a church where we can feel perfectly at ease with our little clique of friends and associates. But by seeking the gratification of these man-centered desires, we fail to grow spiritually ourselves and weaken our witness in a hopelessly divided and warring world.

As ministers and elders we must warn incessantly against this growing evil. The sin lies at the door of every human heart. Here we must experience the relevance of the Word which teaches us, “Owe no man anything but to love one another; for he that loveth another hath fulfilled the law.” In choosing a church-home that love will seek not itself but the welfare of others and the unity of Christ’s body which is so essential in our sin-wracked world.