* Midway in the Simplon Pass the traveler journeying southward comes upon a stone bearing the simple word “Italia.” At that point he passes a boundary line, and every stage from there on makes plainer how great has been the change from Switzerland to Italy. The air becomes warmer and vines line the wayside. And below, embosomed in verdure, Lake Maggiore expands before him. It is as if that stone in the pass with the word “Italia” signaled the entrance into a new world. Blessed is the man who by the grace of God comes upon the sign, “Bethlehem,” and whose eyes are then opened to the new life that lies before him in Christ.

* Bethlehem is for sinners. It is because we are sinners that we need a Savior. In the sight of God we are fallen foes. Nor can the salvation of God have any thing to do with us but as fallen foes. It is only as sinners that we can call to God. Should we call in any other character, we call with a lie in our mouths. Bethlehem is not for righteous people. It is for sinners! “This is a faithful saying and worthy of all acceptation, that Christ Jesus came into the world to save sinners” ( I Timothy 1:15).

* The Author of our salvation is God over all blessed for ever more. He is God’s Son who was born at Bethlehem. God’s only-begotten Son! He is the Christ, the Messiah, the Anointed, the great High Priest, who, after offering himself as an atonement for the sins of his people, entered, not into the holy place made with hands, but into the heaven of heavens, where he sits as the King of kings, and the Lord of glory. He is King on the holy hill of Zion, where he reigns and will continue to reign until he hath put all his enemies under his foot-stool. He is Jesus who shall save his people from their sins. Jesus!—the name dear to sinners!—the name by which he is given to sinners—a name that ought to vibrate like music in the ears of sinners; for this is the only name under heaven by which men can be saved. He who is the first and the last, the great Alpha and Omega, came into the world to do for sinners what sinners could never do for themselves. Christmas spells hope for the sinner, but that hope lies not in the sinner. The hope is outside the sinner. It must be brought to him by one who comes to him. That is what Jesus did. He who was from the beginning God, the eternal Word was made flesh and tabernacled among us. He came into the world—the incarnation of Deity, and did not abhor the Virgin’s womb. He came into the world as the fulfillment of all the promises made to the patriarchs. He came as the substance of all the shadows and sign and symbols of the Mosaic ritual. His coming was not untimed, unplanned. “But when the fulness of time came, God sent forth his Son” (Galatians 4:4). 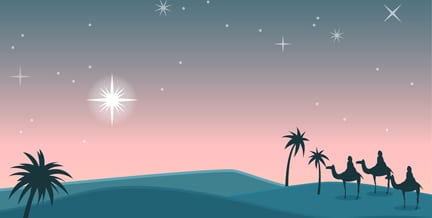 * Bethlehem was not friendly to him. The world was not happy to greet him. Thrones and crowns and scepters did not await him. Had they been glad to receive him, it still would have been for him a great condescension. But, no! He came into the world to be a man of sorrows and acquainted with grief. He came into a rebel world, a world in arms against him, a world that finally crucified him. Yet he came, knowing to what he came. And he came to bless and to save!

* Who can measure the distance from the throne of glory to the manger at Bethlehem and thence to the cross of Calvary? We search in vain for an illustration to help us understand such impoverishment. He was rich, yet for our sakes became poor! This is grace! The love of the King of heaven for rebels who have flamed his authority and broken his laws. The love of the altogether lovely One for the altogether unlovely. The love of the Monarch of the universe stooping in mercy and saving power from the throne of glory to rift those who are in the horrible pit and the miry clay. Grace deals with disgrace.

* In an inscription that belongs to the period of the birth of Christ, Augustus is addressed as the Caesar who reigns over the seas and the continents, who holds from Jupiter, his father, the titles of liberator, master of Europe and Asia, star of all Greece, who lifts himself up with the glory of the great Jupiter. But born to us in the city of David is another David who has out-lived and out-ruled this Roman Goliath. His titles endure—Savior, Liberator, King of kings, Lord of lords, Star of Judah and Son of the Most High God.

O where are kings and empires now

Of old that went and came?

But, Lord. Thy Church is praying yet.

A thousand years the same.

A mountain that shall fill the earth,

A house not made by hands.

* And he is coming again! He is coming “to judge the living and the dead.” Every eye shall see him. They also who pierced him. The final judgment is necessary, for the wheat and the tares cannot harvest themselves. He is coming again. What if it were today?

* Thanks be to God for his unspeakable gift!