I had gone to visit Grandpa in Groningen, Holland, for the last time before coming to the United States to study in January, 1996. He was in a nursing home because of a stroke years earlier, but he still played excitedly in a chess club, often went to concerts, and wrote us newsy letters about what all our cousins were up to. He enthusiastically looked forward to the daily visits of Grandma and the rest of the family.

But on the day of my visit, something was clearly wrong. Inexplicably, he had declined dramatically. He clenched my hand, asking for a glass of water because he was terribly thirsty I helped him drink with a straw He told me that he loved me and that I should enjoy my studies, He was very sleepy, so I gave him a hug and a kiss and he lifted his hand to wave me goodbye. 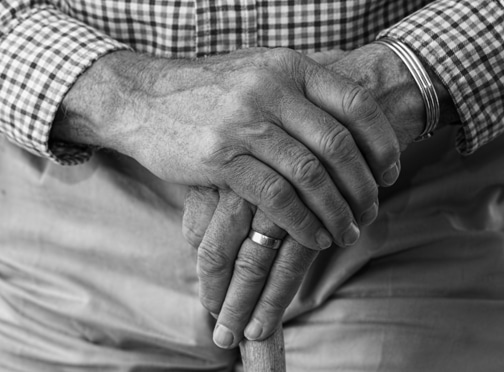 I called my father, telling him that I felt something wasn’t quite right Everyone else in the family wondered why Grandpa was declining so rapidly. On January 22, three days after my visit, my aunt was with Grandpa, giving him some water when a nurse walked by and told her that she couldn’t do that as it was the doctor’s orders to withhold all food and water. My aunt, beside herself, ran crying down the halls telling everybody what was happening, but nobody lifted a finger. The wider family tried to talk to the doctor, but he refused all consultation. I never saw my grandfather again. Five days after he wished me well in my studies, he was dead.

The awful truth about Grandpa’s decline eventually became maddeningly clear. A week before his death my aunt had taken him for a biopsy. He had slight problems with a bump on his gum. The biopsy had shown the presence of non-Hodgkin’s lymphoma in a virtually symptomless form. Given Grandpa’s age, it was not an immediate problem. In the presence of Grandma, he had asked the doctor at the nursing home for help because he had pain in his leg from deep venous thrombosis, not a life-threatening problem, and one that was improving. The pain was there because he’d stopped taking his blood thinners for a few days in connection with the biopsy.

But the doctor claims that Grandpa’s request “for help” was really a plea for assistance in ending his own life. So, without discussing his plan with my grandfather, my grandmother or anyone else in our family, the doctor prescribed a lethal dose of morphine and wrote orders that my grandfather be starved to death. Of course, he didn’t write it that way.

Grandpa, gone! He had held my hand five days ago, How could it be? Impossible! Why?

By now, euthanasia estimates in the Netherlands range from 5,000 to 20,000 out of 130,000 deaths recorded annually, according to Hebert Hendrin in his book, Seduced by Death: Doctors, Patients, and the Dutch Cure. The decision that was initially made to help those in irretrievable pain, has become a slippery slope that has gotten steeper and more slippery. Hendrin insists that “virtually every guideline established by the Dutch to regulate euthanasia has been modified or violated with impunity The Dutch government’s own commissioned research has documented that in more than 1,000 cases a year, doctors actively cause or hasten death without the patient’s request.”

The death forced upon my grandfather is not a wild exception. In the two weeks after my grandfather’s death, there were 18 deaths in that one nursing home.

What gives us the right to determine that it is time for someone to die? And who goes next? The patient that the doctor is angry with? The one who is filling up bed space? The one who is a nuisance?

I was dumfounded when I read Ellen Goodman’s column in the St. Louis Post Dispatch on April 22, 1997, “The Dutch Way on Assisted Death.” Euthanasia appears to be spreading, Goodman describes euthanasia in Holland as “somewhere between forbidden and permitted…The ending of a life by a doctor remains illegal, but doctors who follow careful guidelines may grant their patients’ death wishes.”

She rather optimistically proposes: “If there is an American parallel to the Dutch way, it might be by a state-by-state experiment, a testing of different rules and experiences with assisted suicide. The truth is that we, too, want to find a way of dying that is both merciful and careful.”

Is euthanasia really merciful and careful? Or in our must-fix mentality is it an expedient way that allows us to pretend that we’ve found a “cure” for the physical demise which awaits us all?

I agree with Dr OJ Baker, a surgeon at the Amsterdam Municipal Hospital who wrote in 1992, “A medical science that is in need of euthanasia has to be changed as soon as possible to a medicine that cares beyond cure.”

A medicine that “cares beyond cure” is a medicine that teaches doctors how to take the scientific knowledge of God’s world we’ve gained and apply it with integrity and honesty in the alleviation of pain; how to walk through the very real human fear of death with the patient when it comes without thinking it has to be somehow fixed; and perhaps, most of all, how to affirm the integrity of the life the patient has lived and, in fact, is still living. No one is served by doctors pretending to be little gods who will make the world a better place, and their own work easier, by hastening our death.

Grandpa, dead. How could it be?

Edith Reitsema wrote this article for the St Louis Post-Dispatch November 30, 1997, It was re-published in Covenant, a monthly publication of Covenant Seminary (PCA) in St. Louis, Missouri, August–September, 1998. It was reprinted by permission of the author, a Dutch citizen who grew up as a child of missionaries in South Africa. Edith now serves at the Dutch L’Abri Fellowship.