The Epistle of James is an intensely practical guide in matters of Christian living. The author’s wisdom cuts through all the religious sham and all our pious play acting. He calls for a commitment. A commitment that is more than just words & sentiment. He calls for a faith that shapes our lives.

James especially takes aim against our self-deception and the many ways in which we kid ourselves into thinking that things really are not our own fault. One of those illusions has to do with temptation. James wants us to get rid of our false, self-serving notions about temptation. “When you are tempted,” he writes; when you sense that strong pull toward doing something you know is wrong; when you find yourself under pressure to compromise; when you find yourself about to lie to someone, or about to exploit someone, or about to inflict pain upon someone, who is to blame? 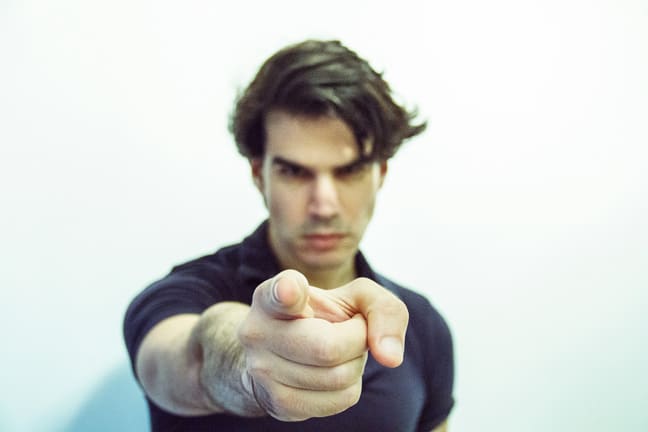 How quick we are to put the blame on someone else when we are tempted. Usually we point that blame in one of three directions: our environment, our companions, or our heredity.

The most common excuse for our sin today is “Everybody else is doing it.” And everybody else probably is! Too much of the world’s morality is based upon the prevailing standards of our environment. People today drift along in whatever direction the wind happens to blow. If the majority of people say “This is okay” who are we to argue?

But that doesn’t make it right! That is the excuse Pilate used as he stood with dripping fingers before a crowd that had shouted: “Crucify Him! Crucify Him!” But that did not exonerate him or excuse him from the guilt of condemning a righteous Man. Paul writes in Romans 12:1 “Do not be conformed to this world.” You cannot use the world as an excuse for your sin.

The next thought that comes into our minds is that if we can not blame the world, maybe we can blame somebody else. That is not a new technique. When God confronted Adam with his sin in the Garden of Eden, Adam was very quick to reply, “Oh, but that woman you gave me, she gave me from the tree and I ate.” Then when the Lord turned to Eve, she very quickly responded: “Ah, but that serpent, he deceived me and I ate.”

All of these excuses are nothing but a reenactment of the drama that took place in Eden. We see already there the ability to make excuses. But we also see how those excuses really blame God. Ever since the Garden we have all excelled in placing the blame for our evil upon anything but ourselves and ultimately upon God. Proverbs 19:3 says: “The foolishness of man subverts his way, and his heart rages against the Lord.”

James challenges us to figure it out logically. He writes that God Himself cannot be tempted with evil. That truth concerning our God is made plain in Scripture. That statement is only true concerning the one, true, living, holy God. All the man-made, demon-inspired, pagan gods reflect the frailties and shortcomings of those who created them. If you read about the Greek and Roman gods of mythology, for example, you will find them to be incredibly immature and, at times, downright wicked. They have supernatural powers but they are without supernatural wisdom. They commit gross sins and often lead their mortal subjects into sin.

The true God is totally different than them. God is light and there is no darkness in Him. Our God has no experience of evil. He is holy. In the actual personal experience of God there has never been any evil nor has there ever been any desire for doing evil. How can goodness experience evil?

Even in the incarnate life of God, from the very day the Son of God was born in Bethlehem to the very day He died upon the Cross of Calvary, He knew no sin. Most certainly, Jesus encountered a great deal of sin everywhere He went while He was on this earth but it never became a part of Him.

Our God, whom no evil can ever even tempt, certainly tempts no one Himself. To understand that more fully, we need to look carefully at a key Greek word. The Greek verb “PEIR-I-AS-MOS” means “to test”. That very same word also means “to tempt”. Whenever the word is used in the New Testament, we have to discover what the word means by the context within which it is used.

Remember the Old Testament passage where God gave Abraham the command to sacrifice his son, Isaac, as an offering to Him? In early Greek translations the verb used in that passage is PEIR-I-ASMOS. It can be translated: “God tested Abraham” or “God tempted Abraham.”

Let us look at a common English word to get a better understanding of this Greek word. Let us say you are running for political office. Your campaign manager realizes that you are not very well known in the community. You need to have your name and your face more widely and prominently displayed. Your manager promises that he will take care of that. He tells you: “I will give you the exposure that you need. I will let everyone know what an attractive, competent, dedicated public servant you are.”

Your political opponent has a different idea in his mind. He wants to ferret out your weaknesses. He wants to discover some moral lapses in your past. He wants to know about every compromising situation you have ever been in. Then, having compiled some of these, he threatens you, saying: “I’m going to expose you.”

James tells us that the devil is out to trip us up. He wants to see us fall. He would like nothing better than to see us renounce God and make a complete mess out of our lives. And so he tempts us. God, on the other hand, wants nothing but the best for us. He wants to see our faith come forth in the midst of life’s struggles as pure gold. And so He tests us.

The primary difference, then, is not in the PEIR-I-AS-MOS – that is, in the event that is happening. The difference is in how you respond to it. If you respond in faithful obedience to God’s Word, you have successfully endured the trial. If you respond by succumbing to the flesh, doubting God and disobeying, you have yielded to temptation.

If you fall for the tempter’s bait do not blame God. That was not what God was after. That was no part of His plan for you. When you responded to temptation, you had to silence His still small voice and turn your back on God to do what you did. In fact, God was there all the time with resources to help you resist Satan. Paul writes: “No temptation has overtaken you but such as is common to man; and God is faithful, He will not allow you to be tempted beyond what you are able, but with the temptation will provide a way to escape also, that you may be able to endure it” (I Corinthians 10:13). You certainly cannot lay the responsibility of your sin at God’s door.

For that matter, you cannot lay the responsibility of your yielding to temptation at Satan’s door, either. The tempter did not overpower you nor did he compel you to do something that was against your will. When you surrender to temptation you cannot pretend to be a helpless victim. It is no one’s fault but your own. It is our own venomous nature that turns everything into poison.

Temptation may come from the outside, but the yielding, the giving in, and the allowing it to take control of our life comes from inside of us. Sin is always an inside job. We would never have a problem with temptation if there were not so much within us to which it appeals. According to James, the culprit is our own evil desires.

No woman can tempt you if your heart is right. Strong drink is no temptation when your inner desires are under control. Money would not be a problem if you didn’t love it so much. It is the desire for the forbidden object – the fruit that attracted Eve; the gold that attracted Achan; and the beauty that attracted David – that led them to sin.

The Cure for Blame

Think on those things! We must identify ourselves with Christ. Then evil will find no place in our lives! When we focus upon Christ; when we become fascinated with His death upon Calvary for our sin, then temptation will not have its way with us because our desire is to love Christ. The more we desire Him, the less we will desire anything else.