It was a warm and humid evening on September 5, 2014, as many people filed into the auditorium of Redeemer University College in Ancaster, Ontario. This humidity would eventually turn into a crashing thunderstorm, which echoed throughout the building. Yet despite some of the discomfort caused by the conditions, it was an evening filled with praise and thanksgiving to our faithful God for everything that He has given us in the past year.

After everyone was seated, including the graduating students, professors, and board of governors, it was clear that we were close to a full house. It is a wonderful thing to witness the support that people have for the seminary education provided by the Canadian Reformed Theological Seminary (CRTS)! Together, we had the opportunity to raise our voices in praise by singing Psalm 68:1–2, ably accompanied by Mr. Brian Vanderhout on the organ. The chairman of the board of governors, Rev. Richard Aasman, then formally opened the evening with Scripture reading and prayer.

Dr. G. H. Visscher presented his principal’s report from the past year to those assembled. It is special to sit and reflect on the many blessings we as seminary community have received from our Father in heaven. Among other things, Dr. Visscher mentioned that the previous year had been a year of many firsts. It was the first year that CRTS had been served by five full-time professors. It was the first time that CRTS and the Theological University in Kampen (seminary of our Dutch sister churches) could have a conference dealing with the topic of how to interpret Scripture. And yet among all these firsts, there was still the regular, daily instruction that could take place. Every day, we had the privilege of studying God’s Word as students and professors. Speaking of students, Dr. Visscher noted that we had three students who would be receiving the master of divinity degree this evening, while we had three new students beginning their studies, for a total of eighteen students. While we can and must be thankful for this, there is still an urgent need for young men to consider whether the Lord has blessed them with the gifts for the ministry of the Word.

After responding in song, Dr. T. G. Van Raalte delivered the keynote address, “The Reason for Our Hope: Christ in Our Apologetics.” His speech was tightly connected to 1 Peter 3:15: “But in your hearts set apart Christ as Lord. Always be prepared to give an answer to everyone who asks you to give the reason for the hope that you have.” Last year was the first time that CRTS offered a course in apologetics (I will refrain from any bad jokes about Canadians here). Dr. Van Raalte pointed out that the text had four specific points: (1) Christ as Lord, (2) our hope, (3) people asking the reason for our hope, and (4) our giving the reason or explanation for our hope. After taking us through each of these points in some detail, Dr. Van Raalte showed what it all meant for our lives in a practical way and ended with seven reflections for apologetics. A full copy of this speech will be published in Clarion. In response, we sang together Psalm 36, which speaks about the wicked choosing lives of sin and self-delusion but how we see light in the light of the Lord.

The master of divinity degree was then conferred on three graduating students: candidate Gerrit Bruintjes, who has accepted the call to the Bethel Canadian Reformed Church at Toronto; candidate Jeff Poort, who has accepted the call to the Grace Canadian Reformed Church at Kerwood; and candidate Tyler Vandergaag, who has accepted the call to the Canadian Reformed Church at Taber. After the degrees had been conferred, Candidate Vandergaag spoke a word of thanks on behalf of the graduating students. He did so in a serious and yet light-hearted way. He not only reflected on the many people who had supported them throughout their studies but also provided some humorous moments from their time in the classroom over the last four years. 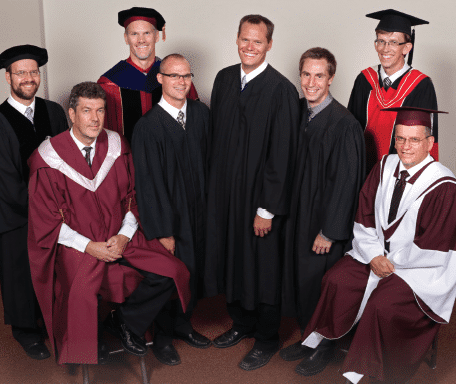 Following this, the Women’s Saving Action (a group of women who diligently raise money for the library at CRTS every year) presented the principal with a check for more than thirty-one thousand dollars. Again, we can see in this the love and support that is present in the churches for their seminary! A collection was then taken for CRTS technological improvements while the Niagara Voice of Praise Choir entertained the audience with two musical pieces. Following the singing of “A Mighty Fortress Is Our God,” Rev. Anthon Souman, a member of the board of governors, closed the evening with prayer, after which we sang our national anthem.

But just because the formal part of the evening was ended, the festivities were not yet over. There was an opportunity to congratulate each of the graduates and their families and to enjoy a time of fellowship over refreshments. While the evening was formally closed before 10:00 p.m., a large number of people did not leave until well after 11. It was a time where many reconnections could take place. Many of the current students had been busy with internships in Canada, the United States, and around the world! It was a time to share our experiences with not only fellow students and professors but also people from the local churches who had an interest in hearing what the students at CRTS were busy with. We thank the Lord for the many blessings he has given us as a seminary community and as churches of our Lord Jesus Christ. We pray that He would continue to bless us all in this coming academic year.

1. For further information about this magazine, see www.clarionmagazine.ca Gerard Veurink is a student at the Canadian Reformed Theological Seminary in Hamilton, Ontario, Canada.