The very first synod of the United Reformed Churches in North America, meeting in 1996 appointed an Inter-Church Relations Committee for, “correspondence and contact with other churches”. Since then, the committee has begun working toward what is termed “complete church unity”, with a number of Reformed and Presbyterian churches that share a common expression of faith with the URC.

The Inter-Church Relations committee was originally appointed for the purpose of “correspondence and contact with other churches.” This would be in keeping with URC Church Order, Article 36, which refers only to ecumenical relations but says nothing about organic union with other churches. That is not to preclude however, that church union certainly could result eventually through ecumenical relations. 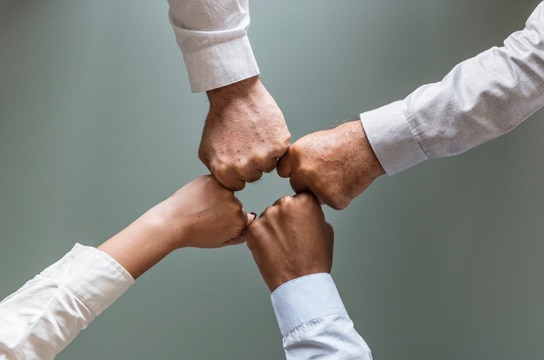 In its report to Synod 1999, CERCU states that the mandate of ecumenical relations and church unity is found in John 17 and Ephesians 4; as well as in Heidelberg Catechism, Lords Day 21 and Belgic Confession, Articles 27-32. In the zeal to achieve complete church unity, Biblical and Confessional references that deal with unity are emphasized along with the importance of confessional unity. Overlooked however, is that Ephesians 4, according to verse 3 also requires, “Being diligent to preserve the unity of the Spirit in the bond of peace.” It should also be noted that John 17:23 in the NIV is interpreted as “complete unity” while most other translations use the word “perfected” or “perfect”, which in the Greek have different meanings.

The unity spoken about in Ephesians 4 and Catechism, Lord’s Day 21 is the unity of the universal church through Christ, the head of the church. Because of our sinful natures, complete unity will not be achieved this side of heaven, and it is only possible to be one in a very limited sense on this side of heaven as the Father and the Son are one, (John. 17). Nonetheless, we must strive toward certain unity on this side of heaven, but doing so in the diligence of preserving the unity of the Spirit in the bond of peace as we already are doing through such endeavors as NAPARC and ICRC.

Consider for example, what happened when congregations that are now a part of the federation of United Reformed Churches in North America seceded from the Christian Reformed Church. In that instance, separation was justified because the unity of the Spirit was already broken on the basis of biblical and confessional integrity, but in each instance without exception, there were those who did not go along with their congregation but went their separate ways.

Likewise, it can be anticipated without a doubt, that even churches with common confessions of faith joining together in organic union would result in splintering. Not all members and perhaps not all congregations would choose to enter into such a union. It would result in disrupting the unity of the Spirit in the bond of peace in all the churches involved. The end result would be a further fragmentation of the church in the pursuit of complete unity.

CERCU in 1999 also stated, “We acknowledge that due to the many limitations and shortcomings of human understanding, there is a brokenness of the church both in local situations and in broader federations. This implies that there can be more than one true church in a particular place at any given time. We need to reject a broad denominationalism on the one hand, as well as a narrow sectarianism on the other. Churches of various backgrounds but of one confession have the duty to pursue the highest form of ecclesiastical fellowship in their context, in order to promote the unity of the church locally as well as in a federation of churches.” To that, we can say we already have that unity through NAPARC and ICRC.

Furthermore, the churches with which CERCU is exploring the possibility of organic union all have their differing peculiar diversities with which the committee seems to believe we all can live together with in an organic union. It is conceivable then that each would be able to do things much in the same manner that they have always done them, all under the umbrella of one organic union. Allowing for various differences among the churches was precisely one of the reasons many of us left our former denomination and in the unity of the Spirit joined together in a new federation of churches.

To each one of those denominations with which CERCU seeks to explore unity, “Grace was given according to the measure of Christ’s gift.” (Ephesians 4:7). In that context, it would be best that we work together each according to those gifts, in reaching out to the world with the truth of the Gospel as expressed in the Reformed faith.

The URCNA Synod should go back to 1996, return to the Church Order and work diligently with those churches of a common confession in preserving and promoting the Reformed faith everywhere by way of ecumenical relations. Real unity in the bond of peace can best be accomplished in that way, as we look forward to complete unity with Christ in the mansions of glory

Mr. Myron Rau is a member of the Covenant United Reformed Church in Kalamazoo, Michigan.