d purposes it was a typical Christian Reformed ordination examination. Delegates offered sermon evaluations, questions were asked in the areas of practical and biblical and theological competency. What set the July 4 exam apart, however, was the fact that a woman was answering the questions.

Ruth Hofman became the first female candidate to be examined by a CRC classis for ordination to the ministry of the Word and sacraments in the 139-year history of the denomination. Hofman’s examination was preceded last March by that of Lesh van Milligen of North Hills e Re in the Detroit suburb of Troy, who was ordained by Ciassis Lake Erie as an evangelist—a limited office allowing persons to preach, administer the sacraments, and do most forms of pastoral ministry in emerging mission churches or as staff assistants in organized churches.

The event came during a special meeting of Classis Toronto just weeks after the 1996 CRC Synod said “no” to 24 overtures requesting a change to last year’s decision on women in office which allowed churches to ordain women as elders and ministers by, in effect, bypassing the church order. At the same time at Synod 1996 three women were declared candidates for the ministry in the CRC. 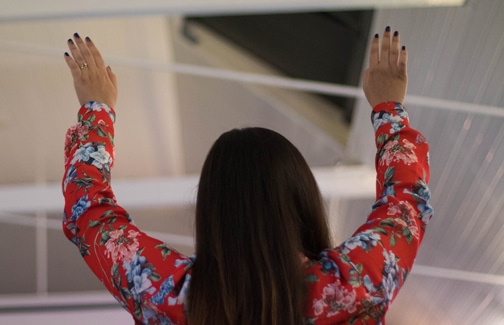 Twenty-four years after the debate over women in office began in earnest, and dozens of study committee reports later, Hofman faced an audience of her colleagues, fellow ministers, elders, members of her home congregation, First Toronto CRC, and other interested observers. After two-and-a-half hours of fielding questions ranging from her own spiritual development to specific points of theology, the chairman of the meeting, Rev. Jack Vos of First CRC in Barrie entertained a motion to accept Ruth Hofman for ordination as a minister of the Word and Sacraments in the CRC. After a brief executive session in which delegates discussed and voted on the motion, Hofman entered the sanctuary of the Willow dale CRC to a standing ovation and sustained applause.

Explaining the decision of classis, Vos said the delegates asked themselves a basic question: “Are we persuaded that the Lord has laid His hand on you to become His servant?” The decision, said Vos on the part of the majority of the delegates, was obvious from the applause.

Long a proponent of women’s ordination, Vos offered two words of pastoral advice to Hofman: “Preach the Word with passion,” and realize that “it will take time for people to get used to the idea of women preaching” in the CRC. Vos said he did see some hope that over time opinions and attitudes would change. He mentioned the example of his mother-in-law, an opponent of women in office, who told him that if she was to hear a woman preach “she was likely to listen better, and would not focus on the gender of the speaker.”

Vos called the declaration of ordination, “a rich moment that you will treasure, and that we will treasure as well,” although in reference to the intentional absence of delegates from two churches in particular, Vos said “it is unfortunate that there are some who could not participate in good conscience.”

Two churches, Maranatha CRC in Woodbridge and Springdale CRC, both located north of Toronto, sent letters to classis expressing that position. The Springdale letter stated the matter in no uncertain terms: “We cannot participate in an action that is unbiblical.” Woodbridge consistory’s letter explained that “the decision of the 1994 Synod accurately reflects our position and we can’t in good conscience participate.” That synod took a strong position against women in office when it stated that “the clear teaching of Scripture prohibits women holding the offices of minister, elder and evangelist.” Three other churches did not send delegates. Covenant CRC in Barrie offered no reason to classis for its absence; Orillia CRC informed classis that no one was available to attend, and the Chinese CRC in Toronto attended but did not send delegates. After reading the letters of the two churches, Vos expressed what he said were the feelings of classis. “While we regret the lack of participation of the two councils, we do respect their position.”

Called by First Toronto as an “expounder” three years ago based on the so-called “compromise decision” of Synod 1992, Hofman has pastored the church since that time and is no stranger to the classis. Her church is also home to a homosexual support group called AWAre, or “As We Are,” headed by church member Dr. Hendrik Hart, who is also a professor at the Institute for Christian Studies in Toronto. The group is controversial for many because of its non-judgmental stance toward homosexuality.

Although appearing initially tentative at the beginning of the examination, Hofman relaxed as the examination progressed, choosing her words carefully in response to various questions. Rev. John Luth, co-pastor of First Barrie, was the questioner in the area of practical, and Rev. Paul Stadt, co-pastor of Georgetown CRC, led the questioning in the areas of biblical and theological matters.

On a number of questions Luth seemed to leave the door open to Hofman to comment on the last two decades of debate over women in office, but Hofman chose not to enter. Luth asked if there were hindrances to the gospel in the CRC. Hofman answered simply, “We’ve been stuck on issues, but they won’t hold us back if we are a praying church.” Asked about the “general health of the CRC,” Hofman said she believes the Spirit is equipping the church. “We are said to be an argumentative church, one that airs its family laundry,” said Hofman, but “we don’t have any arguments that aren’t around trying to understand what God is saying in His Word.”

It was under Stadt’s questioning that certain “sticky” issues were broached. Asked about her response to the charismatic movement and particularly the phenomenon called the “Toronto Blessing,” Hofman said that she has attended the “Toronto Blessing” meetings, and would not discourage anyone from attending. “I don’t know what God might have in mind for any of us….”said Hofman, referring to the movement of the Spirit in people’s lives. “Go,” she advised. “but go with discernment.”

Asked about the growing movement toward cooperation from some in the evangelical community with Roman Catholics, Hofman said that the Catholic Church was not the same church “that is was when we protested it” at the time of the Reformation, and said that there is more attention to the Word of God in the Catholic Church than there once was. “We’re a lot closer together than we once were.”

Although not asked directly about her position on the issue of homosexuality, Stadt instead asked Hofman’s opinion of the 1973 synod report on homosexuality.

Hofman tiptoed delicately. “For its time it was ahead,” said Hofman. “There were few churches at the time addressing those types of concerns. It was very well done in terms of its conclusions from Scripture.”

Making reference to the recent decision of synod to appoint a committee to restudy the issue, Hofman said that the church needs to be more prayerful, mindful and pastoral to homosexuals. “I presume the study coming forward will note that we are not as pastoral as we should have been,” said Hofman.

Asked about her views on feminism, Hofman again walked delicately through the potential mine field, focusing instead on those in the feminist movement who feel the need to change their image of God in the face of what they consider to be inequality and an imbalance in the church. Hofman firmly disagreed with that position. “I don’t need to change my image of God…I know that my God is a transcendent God.”

Synodical deputy Dr. H. Vander Plaat representing Classis Niagara, reopened the homosexuality issue when he posed a question that was raised in the debates over women in office in his classis a few years earlier. “What do you say to the argument that the issue of women in office necessarily opens the door to the acceptance of homosexual ministers?” asked Vander Plaat.

“I don’t see the consequence is necessarily there,” said Hofman, citing examples of denominations which for years have ordained women ministers and yet do not have homosexuals in the pulpit.

“Yes,” answered Hofman, whereas the state of women in creation is not a distortion. “We have different discussions there,” said Hofman.

Later in the evening, Rev. Herman Van Niejenhuis, pastor of Willowdale CRC and co-author of a report on homosexuality for Classis Toronto, asked Hofman for a one-word answer to the question, “Is your sexuality distorted?” “And I want a one-word answer, yes or no,” said Van Niejenhuis. Appearing somewhat flustered, Hofman hesitated, attempted to qualify her response, was cut off by Van Niejenhuis, and finally answered, “Yes, it is.”

Hofman, the first “official” woman minister in the CRC, is to be ordained at First Toronto CRC on Saturday, August 24.