In January of this year, I had the privilege of teaching at a fledgling Reformed seminary in Riga. Latvia. under the auspices of International Theological Education Ministries, Inc. lTEM, formerly, Christ for Russia, Inc. Dr. George Van Groningen, who introduced readers of The Outlook to the work of Christ for Russia in the Ukraine in an earlier issue [June, 1996], was instrumental in the founding of this seminary and initially contacted me about the possibility of teaching a course during the month of January. Since January coincides with the interim at Mid-America Reformed Seminary, I was able, with the Board of Trustees’ permission, to accept this assignment. The following report was originally written for the Board of ITEM, but the editors asked that I submit it for publication in The Outlook as well. As background to this report, I would like to quote the Statement of Purpose and Philosophy of Ministry of ITEM:

“In obedience to the Great Commission, ITEM exists to serve the churches in the Commonwealth of Independent States [CIS, formerly Soviet Union] and Central Europe in their efforts to train biblically sound pastors and church leaders. To this end, ITEM works to secure prayer, labor. resources and finances 1) to establish seminaries and pastoral training centers, 2) to assemble theological libraries and 3) to translate and publish solid biblical literature. ITEM’s purpose and philosophy of ministry spring from the belief that the most effective evangelism, discipleship and church planting occur not by exporting American institutions and methods, but by equipping national believers with the biblical tools to do the work of ministry in their own cultural context. Not only do we believe this to be a biblical model for missions, we believe it is a particularly strategic model. We further affirm the importance the Bible places on the teaching office of pastors in equipping these national believers (Ephesians 4:11–15; Romans 10:12–15). Therefore, ITEM works in a support role with national churches in the establishment and operation of programs to provide pastoral training. By sending professors, financial resources and resource/reference materials, ITEM can train many pastors whose ministry and influence will far exceed that of transplanted westerners.”

Before going to Riga, Latvia, in January of 1999, my only acquaintance with Latvia and the work of I.T.E.M. there was through information given to me by Dr. George Van Groningen and Larry Stout, acting director of the fledging seminary in Riga. Though I had done some study of the history of the Latvian republic and its people, it was with a sense of the unknown and just a little uncertainty that I left for Riga on Friday, January 15.

My flight to Riga was with SAS airlines. I flew directly to Stockholm from Chicago and then flew with Air Baltic to Riga, arriving early in the afternoon of the 16th. Dainis Smits, an elder of the Reformed Bible Fellowship Church and a member of the educational committee for the seminary, met me at the airport. Dainis brought me to my hotel, Ragi and Braugi (“relatives and friends” in Latvian), which is located in the center of the “old city” of Latvia. The hotel was located only a few blocks from the Technical University where the Reformed Bible Fellowship Church meets for worship and the seminary has rented a classroom for its classes. I was struck by the age and beauty of the old city of Riga, originally built in the early thirteenth century. The Gothic steeples of the cathedrals dominate the skyline of the city. The old city is surrounded by an ancient moat on three sides and the Daugava River on the other. 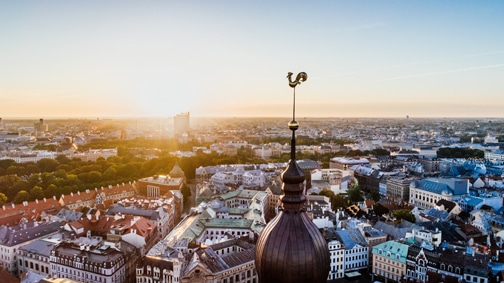 The class I taught during my two weeks in Latvia was on the subjects of Revelation, Inspiration and Hermeneutics. Rather than teaching two different classes at two different locations and times, we were able to combine the Russian class from the Riga International Bible School and the Latvian class from the Reformed Seminary. For those students who were not proficient in the English language, simultaneous translation was offered in either the Russian or Latvian languages. Approximately 22 Institute and Seminary students took the class for credit; another 10–12 students were regular auditors. The course was well-received, though the historic Reformed position that God’s special revelation has ceased with the closing of the canon of Scripture met with some opposition among the students. Charismatic and pentecostal pastors from North America have influenced many of the students. Consequently, they are inclined to the view that God continues to reveal Himself today through prophecy and other means, beyond the limits of the Scriptures.

Throughout the two weeks I spent teaching this course, I was often impressed with the students’ eagerness to learn and their competence in handling many of the topics that were addressed. Though the students from the Riga International Bible School were not as advanced as the seminary students, they were very conscientious in their attendance and gave a good account of themselves in their oral examinations at the end of the course.

While I was in Riga, I had some additional opportunities to preach and to teach in the Reformed Fellowship Bible Church. On my second Sunday in Riga, Pastor Alvis Saukis invited me to preach during the morning service. Pastor Alvis also asked me to present a lecture on Abraham Kuyper after the morning service to an adult Sunday School class. Many of the members of the Reformed Fellowship Bible Church are young Christians who are committed to the cause of the gospel and the rebuilding of Latvia after many years under Soviet domination. Some of them are in strategic positions in business and construction. One member of the congregation and student at the seminary is a noted playwright. Through the work of Larry Stout, an educational missionary in Latvia, many of them have been introduced to the life and work of Abraham Kuyper and are keenly interested in articulating the Christian worldview in its relation to the reconstruction of Latvian society. For many of them, the idea of a Christian “vocation,” a calling to serve the Lord in their respective places of service, is a liberating idea. Having recently written a series of articles on Kuyper in The Outlook, I was quite happy to make this presentation.

Though there are many details of my time and work in Latvia that could be reported further. I would like to summarize my teaching in Latvia with several observations:

First, though the Latvian Reformed church(es) are small in number and size, and though they do not enjoy the advantage of a long history in Latvia (historically the Latvian nation has been Lutheran in confession), the Lord is building His church there in a remarkable way. I was struck during my visit by the youthfulness of the members of the Reformed Fellowship Bible Church, their eagerness to grow in understanding the Scriptures and the Reformed faith, and their keen interest in how the gospel of the kingdom of our Lord Jesus Christ relates to the present challenges confronting the Latvian nation and people. There is a profound sense that this is a critical moment in Latvian history and a moment of great opportunity so far as the communication of the gospel is concerned. Pastor Alvis is anxious to plant a number of Reformed churches and to see missionaries go to Russia with the gospel. He has a great vision (the “Amber Vision,” as they have chosen to call it) for the extension of the gospel in Latvia and throughout Eastern Europe, especially in the Baltic states and the various parts of the former Soviet Union.

Second, there is no doubt that our brothers and sisters in Latvia need whatever assistance we can provide them in teaching and instruction in the Scriptures and the Reformed faith. While I was in Latvia, I was surprised to discover that the great Reformed confessions of the 16th & 17th centuries have not been translated into the Latvian language. Larry Stout indicated to me that this was a project they would like to undertake, perhaps asking Maira (the English/Latvian translator for the seminary courses) to begin the work. There are very few, if any, written resources in the Latvian language that represent the Reformed position. Many of us who have received such a rich inheritance in the Reformed faith and life have the obligation and opportunity to share it with the churches in Latvia. May God give us the desire and means to make the best use of the opportunity.

Third, Latvia is a nation facing many extraordinary challenges. There are long-standing hostilities and problems between the majority of the people who are Latvian and a sizable minority (approaching 45%) who are Russian. Politically, Latvia has never known any sustained period of freedom or independence. As a result, the development of political parties and the functioning of the national parliament (called the “Saeima”) are matters fraught with many difficulties and problems. Furthermore, the legacy of Soviet and communist tyranny in Latvia can be witnessed in such things as: a weak and as yet underdeveloped national economy; a widening disparity between the rich and the poor; rampant corruption in the political and legal systems; high divorce and abortion rates; and a great measure of uncertainty about the future development of the nation. One can witness in Latvia today the destructive effects of ideologies that were born out of sinful rebellion to God’s ordinances and law. Only the gospel, articulated in all of its richness and implication for all areas of life, can answer to the need of the Latvian nation and people. At this critical juncture in the history of Latvia, the opportunities for making a difference in the rebuilding of Latvian society are as promising as they are daunting.

I will not make any more observations than these, lest I pretend to know more about Latvia than any visitor such as myself could possibly learn in a few weeks time. I offer these, however, in order to say that my time spent in Latvia was most enriching. To see the Lord at work among His people there; to have the opportunity to teach students eager to learn the Reformed faith; to be able to make a small contribution to facing the challenges of the Christian community in Latvia today – these were blessings for which I am deeply grateful.