For you know the grace of our Lord Jesus Christ, that though he was rich, yet for your sake he became poor, so that by his poverty you might become rich. II Corinthians 8:9

These words are part of an appeal made by the apostle Paul to the Corinthians for financial aid to the poverty stricken mother church in Jerusalem. He makes mention of the churches of Macedonia, who though themselves poor, gave beyond their power of their own accord. No high pressure methods were needed. There was no need of suppers, sales or drives. Paul writes concerning the giving of the Macedonians: “beseeching us with much entreaty in regard of this grace and the fellowship in the ministering to the saints.” Neither is it his purpose to put pressure on the Corinthians to do their part in the support of the poor in Jerusalem. “I speak not by way of commandment, but as proving through the earnestness of others the sincerity also of your love.” Thus he comes to speak of the grace of our Lord Jesus Christ towards them as the motive for giving liberally. “For you know the grace of our Lord Jesus Christ, that though he was rich, yet for your sake he became poor, so that by his poverty you might become rich.” 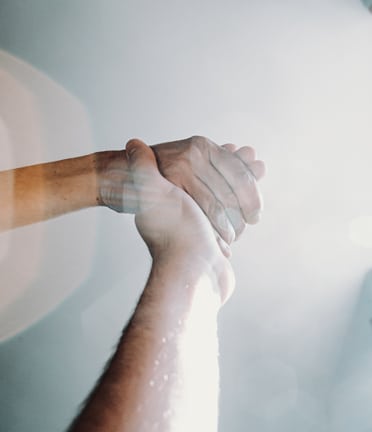 Part of our Christmas celebration is the giving of gifts. Personally I love this part of the Christmas celebration. I know the danger. We can easily lose sight in the giving and the receiving of our gifts of that which is the only important part of this feast. I could not honestly say that I never sin in connection with the giving and receiving of Christmas gifts. I am also in this respect most deeply concerned about our children. It requires a great deal of effort on the part of parents and grandparents to keep the thoughts of our children directed to the great gift of God. But I deeply appreciate this part of the Christmas celebration, because our love for one another delights in manifesting itself in the thoughtful selection of a gift, which will bring happiness to the object of our love.

Remember the Poor at Christmas

This, however, is not the giving Paul has in mind. He is thinking of the poor, which ought to be remembered. And it seems to me, that in the Christmas season, we might also think about this. There is a great deal of need. We, who enjoy a prosperity even far beyond the imagination of citizens of other nations, are prone to forget that we live in a hungry world. A few days ago I saw two pictures. The one showed a group of children playing in a mountain of wheat dumped on the street of one of our western towns, because storage for it was not available. The other pictured a group of children who plainly showed the ravages of hunger. We as Christian people may not forget: that we live in a hungry world, “for you know the grace of our Lord Jesus Christ, that though he was rich, yet for your sake he became poor, so that by his poverty you might become rich.”

There is need everywhere. I remember that a few days ago we spent about an hour in our consistory meeting reading letters of appeal for funds. Everyone of them was worthy of our attention. I know that there is reason for gratitude when we behold the liberal hand shown by Christian churches and individuals. But I wonder whether the apostle could write about us as he wrote about the Macedonians “how that in much proof of affliction the abundance of their joy and their deep poverty abounded unto the riches of their liberality. For according to their power, I bear witness, yea and beyond their power, they gave of their own accord.” It seems to me that everyone of us will do well to examine himself and to see whether we are good stewards of that which the Lord has committed to our care.

When we once again go to Bethlehem to look upon the babe born of the virgin Mary, let us meditate upon the fact that he, who was rich, became poor for our sake. He was rich. We cannot begin to measure his riches. He was the Son of God. How could we possibly have an adequate knowledge of this riches? He was surrounded by the glory of heaven. He was the beloved of his Father, whom he loved with all the intensity of his infinite self. The tongue of men and of angels could not describe the glory, which was his. It is he, who became poor.

And as little as we can understand his riches, so little we know about his poverty. In his letter to the Philippians the apostle Paul makes an attempt to span the difference between his riches and his poverty. We read: “Christ Jesus, who, existing in the form of God, counted not the being on an equality with God a thing to be grasped, but emptied himself, taking the form of a servant, being made in the likeness of men; and being found in fashion as a man, he humbled himself, becoming obedient even unto death, yea, the death of the cross.”

Standing at the manger, we should remember that there was no place for him in the inn. His mother was poor, being compelled to make the sacrifice of the poor, a pair of turtledoves. He himself declared that though the foxes have holes and the birds of the heavens have nests, the Son of Man did not have where to lay his head. When the temple tax is demanded he must send Peter to catch a fish. Material wealth and abundance he has never known. Yet this was not the worst: part of his poverty. Isaiah testifies concerning him that he was “as a root out of a dry ground; he hath no form nor comeliness; and when we see him, there is no beauty that we should desire him. H e was despised, and rejected of men; a man of sorrows, and acquainted with grief: and as one from whom men hide their face he was despised; and we esteemed him not.”

The Poverty of Isolation

There is no greater poverty than to have to walk alone! This Jesus walked alone among men. I can imagine that the children of Nazareth often shunned his company, because he would have no part of anything that was sinful. His own mother did not understand him, and he loved his mother more than anyone ever loved a mother. Her words spoken to him when she found him in the temple stung him, and out of the anguish of his soul he asks: “How is it that ye sought me? knew ye not that I must be in my Father’s house?” When he gives bread to the hungry, the multitude surrounds him with acclaim; but when he insists on giving them the Bread from Heaven, they leave him so that he turns to his disciples and says: Do you not also want to go away? His poverty was greatest in that h e was despised and rejected of men. He came unto his own and his own received him not. Just imagine that you and I would have to walk without friends, with·out ever being understood; this would be a poverty which no amount of silver and gold could ever satisfy.

But his poverty was greater than .all this. He, the Son of the Father, had to experience the eternal wrath of God. “Jehovah hath laid upon him the iniquity of us all.” He experienced that his Father turned away from him and the consciousness of this poverty of his soul caused the bloody sweat in the Garden of Gethsemane and the cry which ever echoes down the corridors of history:

“My God, my God, why hast thou forsaken me?” And only the damned will know something of the utter poverty of being forsaken by God. O, we do not know, nor can we fathom the depth of these words: He, who was rich, became poor.

He became poor for our sake. He took upon himself our poverty. Man through sin had lost his highest good. Man because of sin was under the curse of God and consequently was consumed in God’s anger and troubled by his wrath. We were without God in the world and consequently without hope. Nor do we know our poverty! It is only because of the work of the Holy Spirit in our hearts that we may begin to realize our poverty a little; but only when we know even as we are known shall we see and realize that without this Christ we had nothing.

He came to make us rich. And again I ask, how rich? Do you know? Can you measure the riches of being restored to the favor and service of God? When Paul thinks of this riches he declares, that which no eye has seen and no ear has he are!, and has not entered in to the boldest imagination of man, God has prepared in Christ Jesus for those who love him. Because of him it can be said that all things are ours. We can glory in the riches of having peace with God and being able to sing: There is now therefore no condemnation for those that are in Christ Jesus.

Paul said to the Corinthians, “You know.” I trust that you who read this meditation also know at least in principle what the coming of Christ into the world means for you.

Knowing this, let there be found in us a heart of compassion for those who are poor because of the lack of material things. Let the call for help, which comes from those who are in need, always find a glad and happy response in our hearts. But let us also remember those who are in spiritual need. Let us both in word and in deed be witnesses of the Light, which came into the world. Doing this our celebration of the Christmas will prove to be a fountain of riches and happiness and peace in the days to come.