This is the season of Christmas. Many of you are sending and receiving Christmas cards. Perhaps the most recurring theme on these cards is “Peace on earth.” This is a popular phrase with believers and unbelievers alike for a reason. “Peace” is something all human beings crave even though they may differ substantially on their definition of that “peace” and on their method of obtaining that “peace.”

All decent citizens are uncomfortable with the moral disintegration, the physical and emotional suffering and the apparent uncertain destiny of man in today’s world. At this season of the year there is an expectant spirit which floats around hoping that somehow, someway, the soft light of candles, the soothing strains of music and the spirit of gentleness and goodwill can be generated among all men all over the world, bringing a peace sufficient to solve all the problems for the coming year. What these people fail to see or accept is the source and the path of true peace.

In announcing the birth of our Savior, the angels saw it and sang it: “Glory to God in the highest and on earth peace to men on whom his favor rests.”

Why did the angels sing “Glory to God”? They sang it because God is a God of truth, of power, of grace.

God is truth because He keeps His Word. All through the Old Testament He promised a Savior and this night that Savior is born. 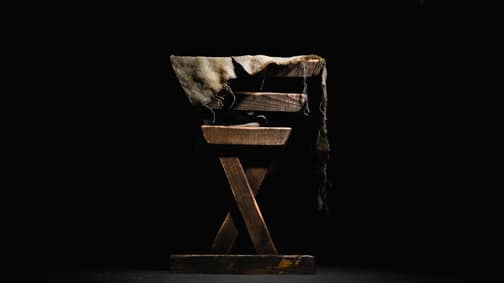 God is power because on this night “the great our Savior, and all God’s fullness in Him!”

God is grace because on this night God’s love paid God’s justice. There are very few people who would exonerate a judge who dismissed a criminal from punishment with the words, “Don’t do it again.” Justice demands that sin be punished and God demanded it, too. But out of pure grace, He punished Himself by placing Himself this night in a cradle under the shadow of a cross.

And because we can sing “Glory to God (the God of truth, power and grace) in the highest,” it is possible to have true peace among men. To this world of perpetual conflict between nations and races, labor and management, husbands and wives, parents and children, the angels sing “Peace.”

What is true peace? It is first of all, peace with God, knowing that I stand before Him clothed only in the righteousness of Christ, my Savior. What I need is not a diplomat, not a general or politician, not a fleet, army or rockets—but a Savior from my sin. And because of His love, demonstrated by His grace and accomplished by His power, I can have peace with myself, knowing that I have been cleansed and comforted by the indwelling presence of His Spirit. And out of that indwelling peace, I can have peace with my neighbor, not a peace that sweeps all differences under the rug, but one which meets challenges with the Word of God, striving to keep the unity of the faith in the bond of peace.

Why aren’t people finding this peace today? It is because they are singing, “Glory to man in the highest.” Human beings are worshiping at the shrines of their own perceived successes—intellectually, scientifically, economically, technologically, sexually. Some pay lip service to a god of their own design, immersing themselves in a kind of mystic union with nebulous forces which they perceive to be greater than themselves. But for the pressing problems in today’s world—loneliness, moral disintegration of every description, emptiness, fragmentation, purposelessness and pain—they have no answers.

If you are one of the redeemed, the Savior’s benediction rests upon you in this season always: “Peace I leave with you, my peace I unto you, not as the world giveth unto not your heart be troubled, neither let it be afraid” (John 14:27).