Some of the most significant thoughts about Christmas may well center around the breath-taking contrasts suggested by the Nativity.

First, we are amazed at the contrasting attitudes of angels and men toward the child born in Bethlehem. The angels, who represented the heavenly world, made swift their journey to the fields of Ephrata eager to announce the coming of the Savior, Christ the Lord. They appeared to certain divinely selected representatives of humanity. If it had not been for their angelic announcement, the astonishing mystery of heaven’s union with earth in the Person of the Word made flesh would have remained unnoticed by all men. 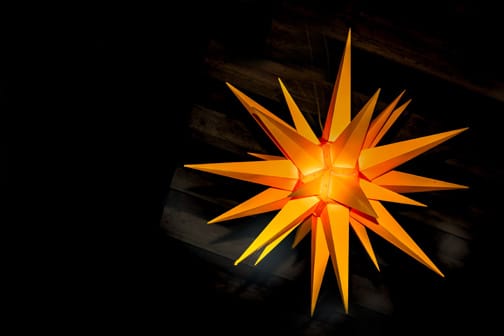 Notice also the contrast between the attitude of those men who heard and believed the message of the angels, and the rest of mankind. The gospel gives us two accounts of men who came and worshiped the Christ-child. First we read about the shepherds who left their flocks to see the Child in the manger. Then we are told about magi who brought their gifts and homage to the same Child months later.

In contrast to their eagerness to worship Jesus, we read about the ral attitude of the human heart is like that of the indifferent citizens of Jerusalem, the prejudiced chief priests and the scribes, or the hostile and hypocritical Herod.

Still, even the shepherds and the Magi would have been unconcerned about the Child of Bethlehem had it not been for God sending them a heavenly message. How true also in our day that a genuine interest in the incarnation of the Son of God is not found in ourselves but must be heaven-sent. The Word of God, coming through God’s messengers, must awaken our otherwise darkened hearts that the Light of the World has arrived.

A still more fundamental contrast is that which exists between the spiritual condition of Bethlehem’s Baby and that of all other members of the human race. Today, people speak and sing so glibly about the Holy Baby in the manger. Do they really mean it? Those who contend that every baby is born with a pure and sinless soul cannot see any unusual excellence in the Child of Mary.

As a result of the Fall, we are conceived and born in sin. Yet, the newborn baby in Bethlehem’s manger is declared holy. The only explanation for His miraculous escape from the taint of sin that has infected our nature at its very source is that this Child was not affected by Adam’s fall. The only way He could escape the result of Adam’s fall is that He is very God of very God. This Baby could not be holy unless He was conceived by the Holy Spirit and born of the virgin Mary.

Because the Baby was holy, a mighty contrast exists between His attitude toward God and the attitude that all the others of our race have toward God. Mankind rashly claims Jesus as its own but it fails to see that spiritually He is not one of us. A deep gulf separates all the sons of Adam from Him who was our sinless High Priest and the sole champion of holiness and righteousness. His spotless holiness accounts for the universal hatred which His appearance and labors called forth. Even those who loved to hear Him preach, and sought His signs, were offended by His preaching when He told them the truth about His heavenly origin. Simeon foresaw it and predicted as much when he said that Mary’s Child would be a sign that is spoken against. Jesus will always be spoken against in this world because He alone defends the honor of the Father while all others are enemies of God. It is true that some have become friends to God, but only as the result of the Messiah’s redemptive work.

We can not begin to understand the extent of Jesus’ humiliation unless we remember the divine glory which He had with the Father before His birth. We should not make the mistake of thinking that His humiliation lay only in the humble circumstances that attended His birth or even in the poverty, persecution, and suffering which He experienced in later life. Even if Christ’s mother had been a queen, his birthplace a palace, and His bed one of softest down, His coming to earth from heaven would still have been a degradation. He, the High and Lofty One, entered a tabernacle of clay. He assumed our nature at its weakest. The Almighty Son of God became a helpless Baby in its mother’s arms. The omniscient God became an unconscious, speechless infant. The omnipresent God became man and was confined to a crib. He who had owned the mansions of heaven had no decent shelter so that we might be sheltered from the stormy blasts of God’s wrath. The Son of God exchanged His heavenly throne for a feedbox. He who was accustomed to the association of angels was laid among the animals. The Father of eternities took upon Himself mortal flesh. The Judge of heaven and earth became the scapegoat of man, laden with guilt and groaning under the penalty of their crimes. That mediatorial work, completed on the cross, began as soon as He was conceived in the womb of the virgin and was born in Bethlehem. The Manger was the first station on the way to the Cross.