“Christianity isn’t a religion; it’s a _______________.” If you need help filling in the blank, the missing word has twelve letters, starts with “r,” and has become modern policy speak for describing the New Testament faith. And, yes, Christianity is about relationship. But it’s the contemporary church’s reluctance to call it a religion that ought to be disconcerting.

This kind of thinking is ubiquitous today. Darrel Evans’s popular worship song “Field of Grace” speaks longingly of heaven as the place “where religion finally dies.” Jefferson Bethke’s 2012 viral video, “Why I Hate Religion but Love Jesus,” declares that “Jesus and religion are on opposite spectrums. See, one is the work of God, one is a manmade invention. One is the cure, the other the infection. . . . Religion is like spraying perfume on a casket. . . . Jesus hated religion.” With less colloquialism but similar confidence, in his excellent series Gospel in Life, Timothy Keller identifies “religion” as self-righteous moralism.

Perhaps Christians have eschewed religion in favor of relationship in response to strong atheistic condemnation of religion. And surely people have been hurt by misapplications of Christianity. Yet, perhaps counterintuitively, “Religion versus Relationship” might be one of the worst messages we could communicate today. Perhaps most obviously, it suggests that we must settle either for a religion-less relationship with Christ or a Christ-less relationship with religion.

In an effort to reevaluate the issue, here are four propositions, with a little help from sixteenth-century reformer Ulrich Zwingli.

Religion Can Be Good or Bad

“Religion” is a neutral term for an “institutionalized system of religious attitudes, beliefs, and practices.” Beyond reasonable doubt Christianity is a system, the ideals of which are institutionalized by the standard of Scripture and by the organization of the church.

In his letter to pilgrim believers, James reflects on two faiths, from which incurably religious people (Acts 17:22) must choose (James 1:26–27). “Useless” religion flounders from a desperately deceived heart. “Pure and undefiled” religion flourishes through rituals of kindness and in a rigorous pursuit of holiness.

Zwingli argued in his 1525 Commentary on True and False Religion that religious disagreement is between those who think “it not worth while to have God in their knowledge (Rom. 1:28), and . . . those who do.” True religion is a heart relationship with God which pervasively affects Christian piety: “faith, life, laws, worship, [and] sacraments.” By contrast, manmade religion ought “more properly to be dubbed ‘hypocrisy, impiety, and superstition.’” 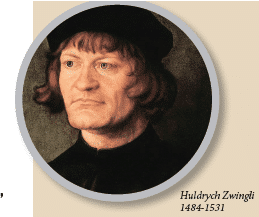 Sadly, moralism sometimes masquerades as true religion. Zwingli compares teaching a man-centered religion with “setting un-cracked nuts before little children.” “Being unable to reach the meat they lick the shell till finally in disgust” they throw it all away. Is it possible that those today who feel fed up with religion have never known a robust Christianity that connects every human experience to the cross? If hirelings are setting uncracked nuts of moralism before God’s children, the solution is not to dispense with religion but to promote one that is rooted in the gospel.

The Bible Combines Religion and Relationship

If religion outlines duties, and relationship is about love, the Bible joins the two in strong and simple terms. When Jesus said, “If you love me keep my commandments” (John 14:15), he’s calling those in relationship with him to join him in being religious! As Kevin DeYoung has pointed out, “If religion is characterized by doctrine, commands, rituals, and structure, then Jesus is not your go-to guy for hating religion.”

Zwingli was convinced that “religion took its rise when God called runaway man” back to his good grace. Religion begins with the God who has revealed Himself to man as creator (Rom. 1:19) and to believers as heavenly Father. Our great hope is to know and be known by God and to rest in His perfect providence. Says Zwingli, God has “this one thing in view, that He may belong to those things which were made by Him.” To know God religiously, as the self-created one who gives being to everything else (Heb. 11:6), is to structure our lives around Him.

Religion structures a vital relationship between God and man the way your skeleton structures your body. When we remove the religious skeleton of the church, we get a slippery, unstable, and spineless body.

“Religion-less Christianity” wants a relationship without ritual, routine, and regulation. Try that in your marriage. Tell your wife you love her but that you don’t want the relationship to get complicated by rules that insist on things like fidelity and commitment. You hate restraints such as regular date nights. You despise observing such rituals as birthdays and anniversaries. Such a “pure and unfettered” relationship is a pipe dream.

Religion is like a marriage. At the heart of marriage is the duty to faithfulness. Zwingli ties together the religious and relational components of Christianity: “Faithfulness demands, first that we learn from God in what way we can please him, [and] in what manner to serve him.” DeYoung observes that “there is one religion whose aim is to worship, serve, know, proclaim, believe, obey, and organize around this Jesus. And without all those verbs, there’s not much Jesus left.”

Is it possible that postmoderns disapprove of the idea of religion not because it sounds old-fashioned but because people prefer a relationship with God without terms?

We Should Rejoice in Religion, Not Ridicule It

What if biblical faith has been a vital force throughout history because it is a religion? What if the church is so weak today because of a rapid erosion of the religious roots that have held the church together for millennia? What if, in the name of a “relationship” with Jesus, many Christians have abandoned religious activities like visiting orphans and widows, evangelizing, tithing, studying, practicing family worship, valuing church membership, and regularly attending corporate worship? Can Christianity meaningfully exist where it is communicated simply as a relationship without a religious framework?

We don’t need less religion; we need more! We need a religion that affirms that all people stand condemned before the holy bar of God’s justice and that all believers stand justified in God’s gracious presence. And we need a religion that stimulates rescued sinners to devote their entire lives to the praise of their rescuer. This religion will compel men and women to do good and resist sin (Gal. 6:10, James 1:27). It will guide them through their whole earthly journey and will lead them to heaven, where religion will not “finally die,” but where its seed will become the tree that will flourish into eternity.

Here’s hoping that someone will someday write a praise song in praise of religion!