What a strange title for a Christmas meditation! Christ the destroyer! The words jolt us. We are unprepared for such a sentiment at Christmastide. Much more congenial to our festive feelings are the oft-quoted references to the Prince of Peace. Isaiah 9:6 and Luke 2:10–14 fit into our Yuletide thoughts much better than the text of this meditation.

Has anyone of us ever sent or received a Christmas card bearing this text? I think not. Yet, such a greeting card might well be printed and circulated, although it is unlikely that anyone but a Christian publisher would be interested in producing it. Only a Christian understands that the announcement of the birth of the Savior was also a sentence of judgment upon Satan. Indeed, this is intimated in Isaiah’s Christmas text. The Son who is given shall have the government upon his shoulder. The Prince of Peace shall exercise his crown rights. His kingdom shall be distinguished by its justice and righteousness “from henceforth even for ever”. How can Satan and his works prevail against this throne!

THE WORKS OF THE DEVIL

What these works arc in the unseen world no one of us knows. We do know what they are in our world, and what we see here astonishes us. That any creature, however powerful, can be the author of so much misery is more than we can understand.

Sin is one of his works. He introduced it into our world, brought it into Eden, ingrafted it into our nature through the voluntary disobedience of our first parents. All the other works of Satan attach to this original treachery. Sin is the foundation of them all.

Suffering is another of them. It grows out of sin and by God’s own law follows sin wherever it goes. We should be utterly confounded were we able to see all the suffering and misery of body and mind in a single city. Imagine, then, what a horrifying spectacle could be presented by all the poverty, illness, pain, soul-withering care and wretchedness that can be found among the millions that inhabit this groaning earth. And it is all the result of sin.

Strife is another of Satan’s works. What a dearth of amity prevails among peoples and nations! What contentions between man and man, family and family, and even church and church. Satan is the sponsor of them all. The crushing waves on a tempestuous sea are only a mild illustration of the bitter strife so often witnessed in human society and of the inhumanities to which it gives rise. We are not safe anywhere this side of heaven.

Death is the final consequence. Here is where the devil appears to complete his triumph among us. No landscape is more pleasant to his eyes than the landscape of a cemetery.

These are his works. God sees him in them all. God sees us in them, too, for we gave our consent and commitment in the original apostasy and we are instruments in carrying them on.

THE SON OF GOD MANIFESTED

If the works of the devil are ever to be destroyed, someone greater than the devil must interpose. Satan has wrought more evil in the universe than any other creature might conceivably accomplish. The powers which Scripture attributes to him in his fallen state have no match among the sons of men. None but God can destroy the works of the devil.

To exhibit a glory greater than what might have been seen had Satan never wrought, God himself comes forth in the person of his Son. He comes forth openly, visibly. The Son of God was manifested. Dwelling eternally in light that no man can approach unto, he chooses to reveal himself in a human factors that can be seen. God manifest in the flesh! Wonder of wonders! When he created the heavens and the earth he was unseen. He spake, and it was done; he commanded, and it stood fast. The Builder was out of sight. The Destroyer becomes visible. By the word of the unseen Lord were the heavens made, but to take away our sin the Word becomes flesh and dwells among us.

How strange is the method of destruction! How surprising the means employed! Man never would write the story this way. For the Destroyer comes not as we should have expected him to come in glorious majesty with the angels of his power in flaming fire, but as one of us, his majesty laid aside, a babe wrapped in swaddling clothes, lying in a manger. 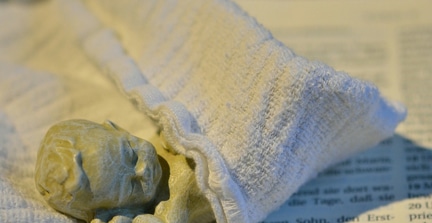 Born under a sentence of death! An infant cradled for a cross! It had to be so, for through death he must destroy him that has the power of death, that is, the devil (cf. Hebrews 2:14). Given by God to be forsaken by God. Only then can the works of the devil be destroyed. Christ must himself first be put away that Satan may be put away. Sin is Satan’s great work. It is that upon which all his other works rest. They can be demolished only when sin is removed.

And this Christ accomplishes by dying as tho propitiation for sin. The terrible blow of divine justice that smites Christ on the cross, where he hangs as an outcast of earth and of heaven, is the judicial stroke that collapses the foundation of Satan’s structure. This judgment upon sin, reaching its hellish climax in the loud cry, “Eli, Eli, lama sabachthani?” opens a way, consistent with divine perfections, for God to pardon sin and to deliver the sinner.

The logistics of Bethlehem, forever baffling to the unbeliever, have been confirmed and vindicated. The Destroyer has achieved his purpose after first appearing as feeble man obedient to the death of the cross. He is now on his mediatorial throne, the risen, glorified Lord, liberating the devil’s bondservants who arc to be gathered into the Church. All authority has been given unto Christ for his mediatorial reign. God has set His king upon the holy hill of Zion. The rod of iron is in his hand, and he shall reign “till he hath put all his enemies under his feet. The last enemy that shall be destroyed is death” (I Corinthians 15:25–26).