In Genesis 1 we see how God created the heavens and the earth and all that’s in it. The big picture is that God created order out of chaos, and after doing that, he gave everything a name so as to know and define each new element, and to give it a place in the created order. 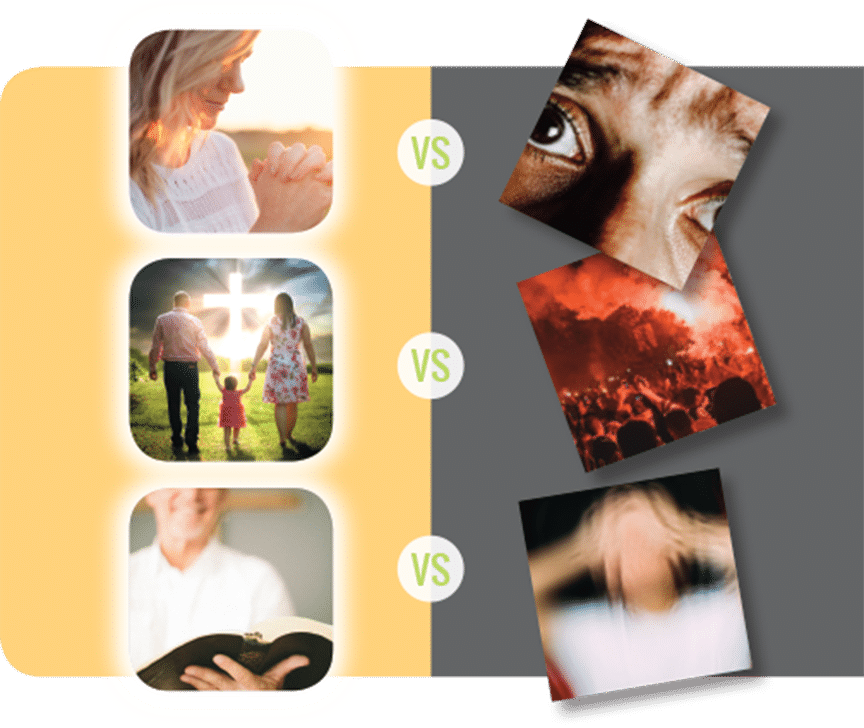 Adam and Eve he made in his image, which means they were living beings and had some of the same responsibility as their maker, in their own, limited environment, which was the garden. They were to name the animals and give them a place in their orderly environment. This is the way God works, and as long as we stay obedient to him, we live happy lives in an orderly environment that we maintain, all to the glory of him who made it so.

Enter Satan. He is the enemy of God and will counteract everything that God has created, down to the smallest detail. He is not creative, so he lets God do the good creation work and then swoops in to mess it up. These words already explain what his greatest goal is for creation and humanity: to create chaos where God created order. And because God created life, the devil is after death. His is a kingdom of death.

In Genesis 3 we see how Satan entered the beautiful order of creation and humanity and succeeded in messing up the relationship between Adam and Eve and their maker. Because the beauty and happiness of the garden were dependent on the first people to stay obedient to God, not only was the relationship spoiled, but also they were thrown out of the garden. In modern words you could say that systemic sin had entered the world. On top of this, everything was now subject to death.

These are still the underlying problems of today. God did not abandon his creation, as we can read throughout the Bible. He is ever so loving and patient to bless us the moment we show the least inclination to draw closer to him. In his love he provided the ultimate way out of chaos and death, by sending his son Jesus to die for our sins and then to overcome death. Jesus calls himself “the way, the truth, and the life,” and the only way to come to the Father is through him. When we take that path, we will enter eternal life, which means we will never have to be afraid of death anymore.

In the meantime, God’s enemy is working overtime to get and keep us away from Jesus and the Father. And it seems he has been quite successful, especially lately. Chaos and death are running rampant and have pervaded our culture to a very high degree. Even when we as Christians know the way out, it is still extremely difficult to distinguish between the elements in our culture that are still God-honoring or those that are God-hating in disguise. Yet, it’s our responsibility to do so. As Paul says in Romans 12:2 (English Standard Version), “Do not be conformed to this world, but be transformed by the renewal of your mind, that by testing you may discern what is the will of God, what is good and acceptable and perfect.” We need to be extremely wary of what comes to us through the media and internet and even other people.

So how do we know where the Satan is involved?

01. If there is chaos involved (riots, laws being ignored, bad stuff that is happening in your own life)

02. If it’s trying to diminish your relationship with Jesus (saying that all religions lead to God, or busyness that keeps you from your time in prayer and Bible reading)

03. If there’s hate involved (real racism, or unforgiveness within your family)

04. Where the goal is death instead of life (abortion, euthanasia, addictions, anger)

06. If it’s humanistic in nature, which means that we can solve the problem without God’s help (climate change, or your own problems)

07. If you are considered of more importance than anyone else, including God (you are told you deserve the good things, and you are a victim if things don’t work out)

08. If the temptation implies that you know better than God, similar to what happened to Adam and Eve (“God is love” and therefore permits everything, or better interpretations of God’s word, the Bible)

09. If the word sin is never mentioned and ignored (nothing is your own fault).

10. If there’s an attempt to scare you or make you afraid (God never wants you to be afraid)

11. If lies or lying is involved

12. If new meaning is given to words and concepts. God spoke and created through language. God’s word is in our language. It shows how important it is to describe ideas in words. A favorite trick of the devil is to use words of which the idea is well known, yet change the meaning so people are being misled. (We see this happening, for example, with words like love, peace, sin)

How do we fight the chaos and the temptations, and how do we bring some order back into our lives? The main point about creating order is to start small. When God created Adam and Eve, he put them in a garden. He didn’t let them loose on the whole earth. That happened only after the fall, when chaos had entered the world. God wants us to start in our own domain, and we should let him take care of the rest of the world. Start by cleaning up your own room, so to speak. Jesus said the same when asked why good people were killed (Luke 13:1–5). His answer was, “Unless you repent, you will all likewise perish.: Start with yourself.

The second main point is to keep yourself safely in the truth and peace of Jesus. He says in John 16:13 that the Spirit of truth will guide you into all the truth. Read everything Jesus told his disciples, as they lived in a society quite similar to ours. And then you’ll also read his comforting words in John 16:33: “I have said these things to you, that in me you may have peace. In the world you will have tribulation. But take heart; I have overcome the world.”

Mrs. Annemarieke Ryskamp was born and raised in the Netherlands. She graduated with a master’s degree in Dutch Language and Literature from Utrecht University and worked for the Dutch l’Abri and as a secondary school teacher at United World College in Singapore. She attends Dutton United Reformed Church (MI) where she leads various Bible study groups and mentor groups. She has two sons who are currently in graduate studies.