In a recent issue of The Banner we were informed of the decision of the Synod of 1958 that financial contributions in the amount of $2000 are solicited for the restoration of the Calvin Auditorium as a living memorial to the great Reformer John Calvin. The readers of TORCH AND TRUMPET are asked to send their contributions to Our Synodical Treasurer, Mr. Tony Noordewier, 855 Kalamazoo Ave., S. E., Grand Rapids 7, Michigan.

The year 1959 will mark the 450th anniversary of John Calvin’s birthday (July 10, 1509), and also the 400th anniversary of the publication of Calvin’s final edition of his great monumental work, “The Institutes of the Christian Religion.” It is expected that more than 45 million Christians in churches of the World Reformed and Presbyterian Alliance will unite next year in a world-wide celebration program to be known as “The Reformed and Presbyterian Jubilee.” Jubilee celebrations will center in scenes of Reformation triumphs in France, Switzerland, Germany, Scotland, Eastern Europe, United States, etc.

Several celebrations are planned to observe the birthday anniversary of John Calvin. On May 26, 1959, a pilgrimage is planned to Noyon, France, Calvin’s birthplace. Though May 26 is not the exact date of Calvin’s birth (that is July 10, 1509) it fits in with more elaborate celebrations to be held in France and Switzerland. May 27 to 29 a special Paris meeting of the French Reformed Church will be held to mark the First National Synod of that Church. May 31 will see a special service in the Cathedral of St. Pierre, where Calvin preached, and will usher in the World Day of Prayer and rededication for all who believe in the great principles of the Reformation. On June 1 the dedication of the Calvin Auditorium (Knox Chapel) will take place in the city of Geneva, Switzerland. This structure, restored over the past two years by financial contributions from various sources, was the original scene of many of Calvin’s theological lectures in Geneva, and the home of the English congregation to which John Knox preached before returning to Scotland to lead the Reformation movement in that nation. 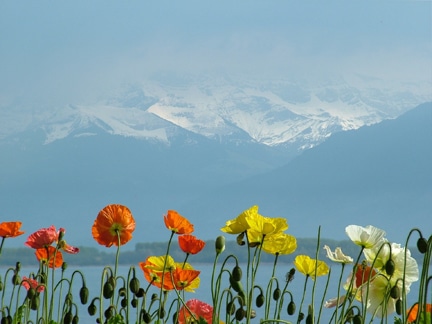 On June 2 and 3 the Geneva Church will sponsor other public events to memorialize the major leaders of the Protestant Reformation. On June 4 to 6 the city and University of Geneva will celebrate the 400th anniversary of the founding of the University by Calvin, and the acceptance by Calvin of Genevan citizenship.

The city of Geneva was the center of Calvin’s ministry, and from it came ministers and trained laymen who carried the torch of freedom and the banners of the Reformation into other parts of Europe, and later even into our own country, United States of America.

Our recent Synod of 1958 decided that also our denomination should have a share in the restoration of the original Calvin Auditorium (Knox Chapel) and authorized the collection of $2000 for that purpose. The Synod also proposed that the anniversary of Calvin’s birth and the publication of the final edition of “The Institutes” be suitably observed in all our churches, and encouraged societies, schools, catechism classes, the religious press, radio, etc., to commemorate this event in an appropriate manner, and that the week of John Calvin’s birthday anniversary be designated as a week . in which our churches are urged in a special way to call attention to the great truths of the Reformed faith, and to our indebtedness to God for using Calvin and other leaders of the Reformation to bequeath to us our precious Reformed heritage.