Although it should be obvious to all Christians that music is a normal avenue for praise and worship, we Calvinists have too often weakIy accepted the many false criticisms of John Calvin and his attitude toward the richest of all arts. Historians contemporary with Calvin started the lie, and succeeding writers to the present day have carried it forward, that John Calvin disliked music and forbade its general practice. 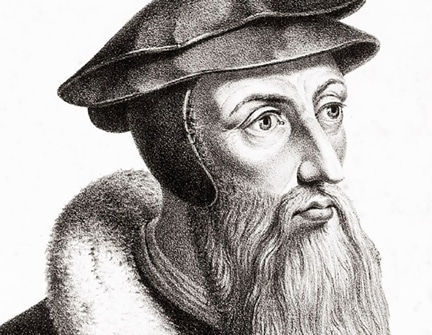 Charles Burney, the great English writer on music, whose History of Music (1776) was the first important treatise in its field, wrote a particularly damning commentary on Calvinist music, claiming that no instrumental music was allowed in Geneva for one hundred years after the Reformation, and that all music, except for psalm-singing, was outlawed. That statement has been copied and recopied by succeeding generations of writers, and since no one bothered to seek the truth, the lie has been brought down to the present with few to challenge it.

It is our acceptance of the lie, the willingness of our forbears as well as our contemporaries to accept meekly the weight of centuries of false criticism, which has brought us to the present situation of musical confusion. There are those among us who, believing the derogatory statements concerning Calvin and music, insist that the true Calvinist must have little or nothing to do with music. There are others who, knowing little about the great musical tradition which Calvinist churches actually possess, feel that we may begin now to erect a musical culture without foundation or roots in the past.

What Place Music in the Church?

The evidences of this confusion are all about us. Many churches wrangle over the desirability of the choir in the worship service. Not too many years ago the presence of an organ in the church was contested by some. The use of instruments other than the organ is seriously frowned upon by many. The importance of psalm-singing as against hymn-singing is a perennial subject of discussion. The place of the individual soloist in the worship service is challenged by some, while the location of the choir in the auditorium is the concern of others. The use of scriptural texts and scriptural paraphrases in choir anthems is the weekly concern of many music committees, and the music sung in the Sunday night “hymn-sings” is a constant source of argument and worry for musical leaders.

All of these musical problems which are facing us today are natural problems, inevitable ones. They have arisen because too few have concerned themselves with them in the past, and we have assumed that our history as a religious body has no rich tradition or foundation upon which to build. Although modern Reformed folk generally have tried to keep in step with the problems of youth, government and education, they have strangely enough side-stepped that one facet of creation which is nearer to them than they realize, and which, of all the means at their disposal, is one of the most adaptable to the praise of God, the science and art of music.

That we have a rich tradition of music is now becoming increasingly apparent. Throughout the Protestant world, this year is being celebrated as the 400th anniversary of John Calvin’s Psalter of 1551. Musicologists everywhere are beginning to awake to the importance of Calvinism as a cultural medium. The so-called humanist scholars of today, the objective, realistic writers, are changing the tune of the past 400 years and are singing the praise of John Calvin, of Clement Marot and of Louis Bourgeois. English translations of the great Dutch Calvinist motets, written for use in the Amsterdam Reformed Church of the 1600’s, are now appearing on the musical scene. The secular world is catching up with the beauty and importance of John Calvin’s music.

Surely we, as Calvinists ourselves, can ill afford to continue the old story that Calvinists have no music of their own! The great challenge to us today is to take hold of this tradition of ours, retain it for ourselves, and make use of it in its proper setting-in our praise of God. This is a serious challenge, for if we refuse to accept it we shall find ourselves deprived of something which should be peculiarly ours. Just as the CathoIic Church, the Lutheran Church and the Greek Orthodox Church have a musical liturgy which is distinctively their own, so we too may yet possess a great means of praise which can be readily recognized as Calvinistic.

Music on a Biblical Foundation

This building of our musical genius upon a biblical foundation, in the tradition of the Reformed churches, is a difficult task. It is one that has been the subject of concern for many of our religious leaders. It is too great a task for one man. There are too many problems involved. There is too much that we do not know about our past; there is too much misunderstanding, and often too little desire to understand. It is a task which will call for the cooperation of theologians, poets and musicians. And most important, it is a task which will take much time.

This series of articles which will appear from time to time will bring to light some of the historical background of the music of Calvin’s church. We hope to discuss the place of the organ in Calvin’s day, and, in the light of such a study, to concern ourselves with the organ as it is used in our modern church. A similar treatment of the choir in the church should also be worthy of consideration. Above all, however, we wish to remain as objective as possible, realizing that our humble opinion may he honestly disagreed with by many. Comments and letters from our readers will be welcomed.