“John Calvin,” observes the Reformation historian Lewis W. Spitz, “was one of those strong and consistent men of history whom people either liked or is liked, adored or abhorred.” Some years ago Christian History magazine published a special issue on the life and thought of Calvin, noting these verdicts regarding him. Calvin’s critics have run the gamut, from fundamentalist preachers to renowned philosophers. For example, Jimmy Swaggart believes that Calvin’s ideas have “caused untold millions of souls to be damned …” Will Durant writes, “But we shall always find it hard to love the man [Calvin] who darkened the human soul with the most absurd and blasphemous conception of God in all the long and honored history of nonsense.” Erich Fromm, the celebrated psychologist, ranks Calvin with “the greatest haters in history.” Voltaire, the famous French Enlightenment philosopher brands him, “Pope of the Protestants.” Some of his contemporaries in-suited him by naming their dogs, Calvin. Calvin now, as then, is truly a man abhorred.

It is comforting to remember Jesus’ words, “Woe to you, when all men speak well of you, for so their fathers did to the false prophets” (Luke 6:26). And conversely, “Blessed are you when men hate you, and when they exclude you and revile you, and cast out your name as evil, on account of the Son of man! Rejoice in that day, and leap for joy, for behold, your reward is great in heaven; for so their fathers did to the prophets” (Luke 6:22, 23). By these standards, John Calvin is a blessed man, indeed. 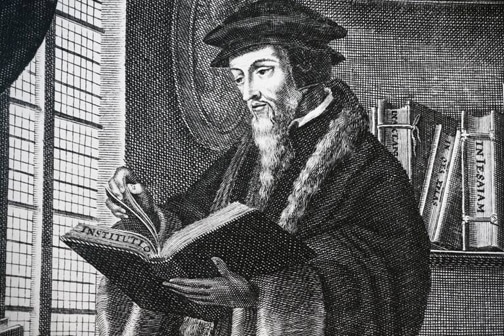 Calvin, however, is also a man adored. He has his ardent admirers and advocates. Historians, theologians, and churchmen of varying stripes rank him among the giants of the faith. Some view him as one of the most profound theologians in the history of the church. The praise William Cunningham heaps on Calvin is illustrative: “Calvin is the man who, next to St. Paul, has done most good to mankind.” And Philip Schaff, the great church historian, writes about him, “Taking into account all his failings, he [Calvin] must be reckoned as one of the greatest and best of men whom God raised up in the history of Christianity.”

The church would benefit by studying Calvin’s theology anew. Many lay people have never had any direct exposure to Calvin’s writings. Even many Reformed pastors are ignorant of Calvin’s life and work. Often what people know of Calvin is secondhand and derivative. There is nothing, however, like reading and pondering Calvin firsthand. Calvin’s presentation of Biblical truth has its own unique quality; it displays a power and profundity without equal. His Institutes of the Christian Religion are something of a masterpiece of theological exposition. They are also a work of literary vigor and potency. Add to this the fact that Calvin wrote theology with a practical aim, that is, to foster in believers a genuine life of devotion and surrender to God, and you see why his work could bless the church and reform it, even today. He continues to be God’s mighty instrument.

Obviously, I am not among those who abhor Calvin. While I try to reserve my adoration for God alone, I do genuinely feel that the church should treasure Calvin. Most of us believe we do. Yet, to prize Calvin while we ignore his theology is akin to a fellow saying he loves pizza, except for the crust, sauce and cheese. We must study Calvin to treasure him and we should start with his Institutes. Various sources are available to make the task easier.

Calvin adored, Calvin abhorred — the issue is extraneous. Finally, let us adore the Lord and abhor the theological apathy and senility which reigns in the church today. Calvin is, I think, an antidote to that malady.

Reprinted from Mid-America Messenger, May 1998.