But while he thought about these things, behold, an angel of the Lord appeared to him in a dream, saying, “Joseph, son of David, do not be afraid to take to you Mary your wife, for that which is conceived in her is of the Holy Spirit. And she will bring forth a Son, and you shall call His name JESUS, for He will save His people from their sins.” Matthew 1:20–21 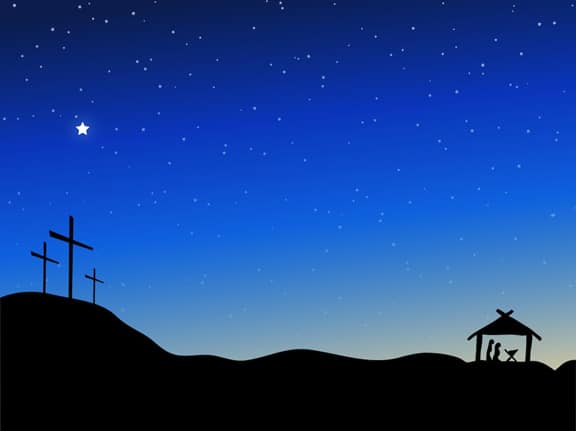 Joseph had been prepared to deal secretly with the “problem” of his betrothed’s pregnancy. You see, he was in a pinch. He loved Mary and did not want her to become an object of ridicule; but he also did not want to marry a woman who had already been with another man and Mary’s pregnancy gave every indication that she had. How was he to deal with this problem? Joseph decided that he would send Mary away without making a public announcement—that she be somewhat spared.

While contemplating his dilemma,God sent His angel to alleviate Joseph’s concern. The angel informed him about the child’s con-ception by the Holy Spirit, and instructed him to call His name Jesus, “for He will save His people fromtheir sins.

”Here is the glorious gospel at Christmas: He will save His people from their sins. Call his name Jesus, the Greek equivalent of “Joshua,” meaning “the Lord (Yahweh) is salvation,” or “the Lord (Yahweh) saves.” You shall call His name Jesus, says the angel, not because that’s a family name that goes back generations; not because Jesus is the sweetest name I know; not because there’s just something about that name. No, Joseph, call His name Jesus so that His name will declare His purpose: He will save His people from their sins.

Simeon was one of the few people who seemed to grasp this great truth. When he took Jesus in his arms that day in the temple, he said: “Lord, now You are letting Your servant depart in peace, according to Your word; for my eyes have seen Your salvation. . . a light to bring revelation to the Gentiles, and the glory of Your people Israel.” Then he said to Mary, “. . .a sword will pierce through your own soul also. . .” (Luke 2:28–35) Simeon, enlightened by the Holy Spirit, was able to understand that while Jesus was the Lord’s salvation, the One who will bruise the serpent’s head, He was also the One whose heel would be bruised.

Few others, it seems, were able to understand this salvific purpose of Christ – at least, initially. Even John the Baptist, who had once declared Jesus to be “the Lamb of God who takes away the sin of the world,” later asked Jesus, “are You the Coming One, or do we look for another?” (John 1:29; Luke 7:20)

Most notable, though, among those who did not understand was Peter. Matthew 16:13ff tells us that Peter, who did understand the divine personhood of Jesus (“You are the Christ, the Son of the Living God”), did not understand His divine purpose. Jesus had told the disciples that he would suffer, die, and rise again on the third day. “Then Peter took Him aside and began to rebuke Him, saying, ‘Far be it from You, Lord; this shall not happen to You!’” (v. 22) Peter didn’t get it.

More striking than Peter’s ignorance, however, was Jesus’ response: “Get behind me, Satan! You are an offense to Me, for you are not mindful of the things of God, but the things of men.” In effect, Jesus was saying, “I am Jesus and I will save My people from their sins. That means I am the Suffering Servant, the despised and rejected one. I will be accursed and hung on a tree. I, who know no sin, will become sin for you. That is why I have come. I am Jesus. And to deny this, to ignore this, to reject this is of the devil, not of God.”

Before Christ was even born the angel had said to Joseph, “You shall call His name Jesus, for He will save His people from their sins.”

What does this have to say to us now as we enter the Christmas season of 2001. Simply this: we must not worship the Christ child apart from His crucifixion. The Son of Joseph became sin for us. We must worship and give “glory to the newborn King” because of Gethsemane, Golgotha and the empty grave. To focus simply on Bethlehem, the baby in a manger, shepherds and wise men while ignoring the suffering, death and resurrection of Christ is not being mindful of the things of God, but the things of men. We must not allow the manger to steal the glory of the cross!

This is not just a theoretical or hypothetical danger. How many Sunday School Christmas programs ignore this? Read the words of your favorite Christmas hymns. Take notice of how few mention this central purpose of Christ’s incarnation: that he will save His people from their sins.

The angel sent from God made certain that his message to Joseph about the child focused upon His salvific purpose. The angel who became visible and audible to the shepherds in the fields also emphasized this point: “Do not be afraid, for behold, I bring you good tidings of great joy which will be to all people. For there is born to you this day in the city of David a Savior, who is Christ the Lord.” (Luke 2:10–11 – emphasis added) It is precisely because the one born is “a Savior” that his message is “good tidings of great joy.”

Since this saving purpose of Christ’s incarnation was the central message of that first Christmas, ought it not be central to every Christmas celebration thereafter? When you celebrate Christmas this year with family and friends, what will be central, and what peripheral? Will the presents, the food, and carols take center stage? Enjoy these things, dear Christian! Celebrate and feast! But do so mindful of, and for no other reason than this: the baby in a manger was Jesus, who saved YOU from your sins.